Haha, but, tell me, you give me the honor of actually creating discord in PvP? Shadow Form Slayer

Admit it, I'm or crazy or brilliant or both. Discord is the way to spam. Let the Assa defeat the interrupt mesmer and boom boom <b>Shadow Form Slayer

Dude people ran discord spike in HA ages ago even with it's 2 second cast time. It used to be N/E with Glyph of Immo and IV, 6 discord necs with rit heals and prots, and a sb monk. --<b>Frosty

IV? Sorry for not knowing all shorts Shadow Form Slayer

I thought it was archived but it's not for some reason, I will just write up a quick version here. --Frosty

Ty, move to trial? Clean it up and show it to the world again? Shadow Form Slayer 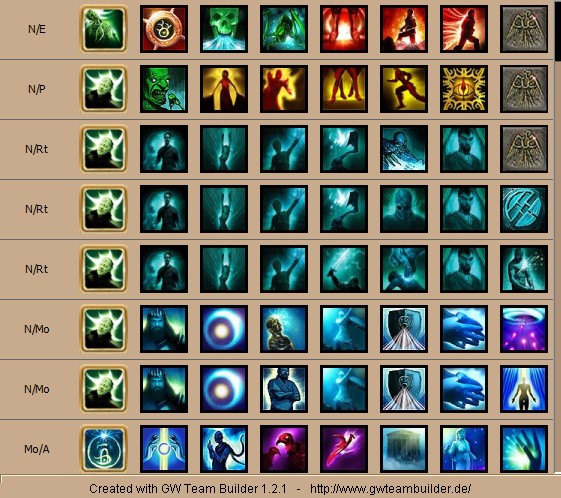 But it's not really that good, a fun gimmick but really not good compared to other spikes you could run now. These kinds of spike builds died out when Aegis got nerfed/changed. --<b>Frosty

No idea what you mean. --Frosty

This I mean. You mean with the real good part this build or the one you reposted Shadow Form Slayer

I think the one Frosty posted may have support in healing and protecting ways. I think this has more spike capabilities with the AoE of DS, and the defense of several professions. <b>Shadow Form Slayer

It does have conditions yes =( <b>Shadow Form Slayer

If you want to spike with Deathly Swarm them Lichspike is generally better. (Build:Team - HA Lichspike), that's about the only necspike that's ever run now and it's rarely used. --<b>Frosty

Retrieved from "https://pvx.fandom.com/wiki/User_talk:Shadow_Form_Slayer/%22PvP_Discord%22?oldid=1081543"
Community content is available under CC-BY-NC-SA 2.5 unless otherwise noted.