The Aoe means either your don't KD or you do AoE domages :> --Frosty

SS Rit with no wep spell?? /confused --BLUE LAZERSEat It

yes, u see the 3rd SS rit is the decoy SS rit, so enemies focus on shutting this down

The rit's use Ghostforge insignia's so they have 75AL while on daggers. Also how can you say you won't make a kills with this? 3 Rit's auto attacking with ooa and oop will do a shit ton of damage, let alone using attack skills. --Frosty

You sir, are a joke and clearly do not tombs. This wipes teams in 1 minute unless they do stupid amounts of linebacking. Rawrawr Dinosaur 13:36, October 30, 2009 (UTC)

Well you rend one so he's running around like a monk with a hammer for 30 seconds and you lineback another and then all of a sudden your 1 minute wipe goes bye bye. Not saying it'll totally cripple the build but taking out a large portion of a builds dmg with 1 skill is kind of a problem.129.2.175.80 15:12, October 30, 2009 (UTC)

I assume you could just, y'know, PD rend?

You can say that about attunements. --Frosty

How well does PDing OoA and OoP do to cripple the build? And if you can get Profane up first? Or! If you use this build and lineback each other forever? Exo Oo 15:22, October 30, 2009 (UTC)

Well i wouldnt worry about losing OoA or Oop so much as someone getting Profane up and your rits walking into it. The Necro could very well sac himself to death if the prot monk pics up on OoA and spams rof a few times. ^^' But that for the most part comes down to luck and player skill i suppose. Still I'm not so sure this is a "great" quality build though. 129.2.175.80 15:33, October 30, 2009 (UTC)

tbh this build got much better with the removal of heros. I used to kittenstomp this with tease/aod pressure but now they have a decent chance that the enchantments stay up long enough to do some serious damage.FMK- 21:09, October 30, 2009 (UTC)

regarding frosty's weapon of agreession comment, before when i posted the build page had the 3rd rit not have any weapon spells on it

Looks like the next roll-or-be-rolled way. Fast matches, anyway. It's a shame you've no space for Sight Beyond Sight 'cos blind will stop this in its tracks, and having more than 3 rezzes would be nice. Also squishy frontliners relying on enchantments to do damage is kinda risky. I'd wager that if it works, it'll work well, though. 188.74.101.228 13:50, November 1, 2009 (UTC)

It takes well longer than 5, rit is at their backline and r/a is at your backline, you just won't kill shit if you lineback with r/as. With other builds you can lineback it and still kill easy though, just r/as dont pump for shit Rawrawr Dinosaur 18:55, November 10, 2009 (UTC)

who the fuck are you? also I never mentioned linebacking it's just that this was strong shortly after heroes got removed because there was no mass ench removal. there is now.and you don't even have wow.FMK- 20:03, November 10, 2009 (UTC)

you could say the same about any build with e/n orders. channeling is more reliable, one PD on order of pain and energy management would be a bit screwed on dervs, channeling is just reliable. Gringo 20:19, November 11, 2009 (UTC)

I always found the d/mo backline sucks anyway, every team ive gone against with it (that 4 melee shit) we've killed in ~2 minutes with 3 d/mos which is a bit stupid considering its supposed to be at least equivelant to an rspike backline. Rawrawr Dinosaur 20:06, November 14, 2009 (UTC)

i've never once lost to a d/mo backline, im not sure why. i would assume they would be better in the right situations, but maybe only bad people run them, who knows. Gringo 21:47, November 14, 2009 (UTC)

Like casting a shit ton of enchantments on someone who is getting trained really quick. That was a fun moment my team had once and then doing mild pew pew. +1 for bad assassins not knowing they're uber-raping their own Orders.--Ikimono "...And my axe!"

Bonder vs SA? Nope, and SS Rits at all vs SA is pretty bad, they only have to lineback a little to make you pretty rubbish for 30 seconds. Imo, archive at least until SA gets nerfed (if it goes, knowing ANet...) Widow maker 17:41, February 10, 2010 (UTC)

Due to the change in the meta from lolSA Rangers to more hexways, balanced blah blah. --Frosty

Iron Mist.... will make this build fail. You forgot to mention the rits must have to use Lightning-dmg modded daggers...otherwise if a target is being snared or called on, that's..well.. you know? Just retared. Other than that, most of the people's comments are valid as well, regarding to bonding/rend. It may be better to take out one SS rit for an R/A who has slightly higher AR than a rit with no insigs (and 100 against elemental) to be a 'better' tank than the squishy rits. All in all, this build smells of fail... and if success, then it'd be luck. There won't be much AR ignoring damage since DB has a 6 sec recharge.... and HotX will fail on balled enemies. And if spiking one enemy, by the time they see Rt/A's, they will know it's a dagger build meta, and will probably prob the person being targeted. As opposed to say..ranger bow spikes..or ele spikes.. where the enemy is not sure who'll get targeted yet, just *bam* hit with 8-10 forked arrows... or 5-6 SF's..meteors....whatever. But this is like seeing a sin run to you.. being that's your only source of damage, 3 dagger weilding rits, it would hugely fail in higher end PvP in my opinion. But just remember, it's only an opinion, and not necessarily a fact, so if it works (which I doubt...unless it's sheer luck) - then congrats to you. -- Guardian 20:41, April 15, 2010 (UTC)

You only use iron mist on relic maps.Why would you need a tank in HA? This build wipes teams in under 30 seconds, a bonder and two monks keep you up long enough to win. L2p and stop being fucking awful anon.--TahiriVeila 20:44, April 15, 2010 (UTC)

There's a difference between trolling and being a dick. And I'm an unabashed troll and dick on pvx. I just don't feel like randomly getting blocked on GWW--TahiriVeila 01:35, April 16, 2010 (UTC)

Only reason I really vote wiped this was because I saw it holding halls again. --Frosty 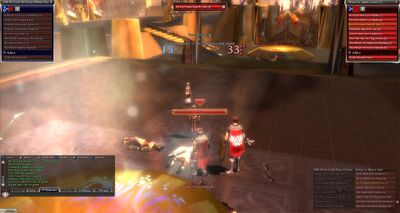 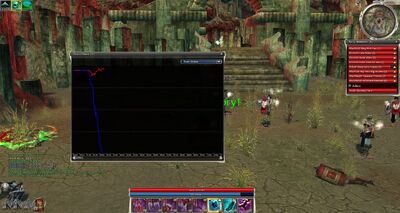 hi! well i haven't played gw for quite long , like since 2007 (like when the original spiritway was meta, and the ritu spirit nerf came that u can have 1 spirit of a type).and i was thinking to come back and play a little more,and i looked around pvx for current pvp meta and i found this. actually back then, i posted this build ( not exactly the same, because of different skill balance. like i used a different runner) . and then everyone trolled the idea like "omg spirit strenght, lol" without even giving it a shot,and was deleted from pvx. well i played it and it owned back then. i know theres no point coming back that hey, this is my idea, i want credit blablabla. i just want to say that i feel a hell lot of satisfaction that my point was justified in time and this stuff made into meta.

Get rid of it. Lamers have much better things to run that makes this bar subpar. (Hexway, decent balance, etc) Vincent Evan [Air Henchman]

PvX doesn't dictate what is meta and what is not. I clearly noted that players rarely run this anymore. Vincent Evan [Air Henchman]

You didnt say that it was rarely run at all.

It is run a LOT. playing it right now for example and held halls earlier today with a pug playing this.FMK- 22:03, June 19, 2010 (UTC)
There might be "better things to run," but that doesnt keep it from being run all the time like it is.

Retrieved from "https://pvx.fandom.com/wiki/Archive_talk:Team_-_HA_Spirit%27s_Strength_Rits?oldid=1112665"
Community content is available under CC-BY-NC-SA 2.5 unless otherwise noted.