Well a good friend of me runs this and he asked me to put it upp.. Also i have no idea around HA, but he is R11, so i guess he knows what he does..Massive

Similiar the Build:Team - HA Euro Spike just another snare mes over an N/Rt

And you're severely lacking defense for a eurospike. ~

Write up the usage please Massive. I like the way you type. ~

Shame with 3 dom is useless, you can just east it, IV blows don't be bad and run PoD, it's the only way this spike kills. Usually only run one ranger also, PnH or ele is brought instead--Goldenstar 00:32, 19 March 2009 (UTC) 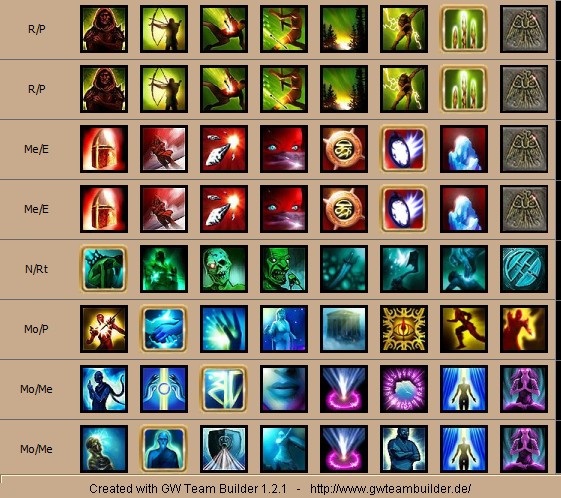 If running that above i suggest letting one ranger run "Gfte!" and "Find their Weakness" for a better source of DW, and maybe go ED aswell on that ranger. But suppose then its really alike the NOW SpikkeMassive

What about a PnH prot.. 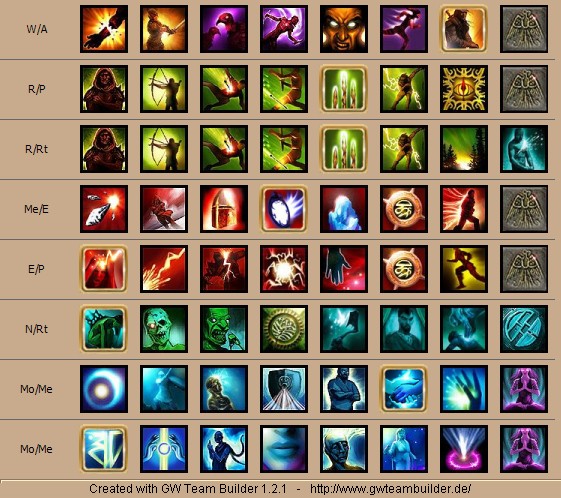 It makes sense, especially since you have FF to handle condition pressure. This is a pretty solid build with a little more flexibility than rspike.

Well, you wouldn't take RC unless you had some sort of draw. PnH is nice for the hex removal, but you won't last long without the powerheals from RC I don't think. Also how is this not vetted yet? Drah McNinja 03:14, 10 May 2009 (UTC)

^ i was just about to ask, how is this not vetted yet, but ill fix it up to look like the one on Frosty's page, this is kidna outdated version --Darklɘs McChaosmongɘr

Omegaspike varies quite a lot but basically

lol well...som1 else go do it i just totally screwd the whole thing up --Darklɘs McChaosmongɘr

The changes made by the IP are generally good, but I do not agree with one of them. The Shatterstorm guy is a good idea, but without MoI you lose 50 damage from him, and now you have to choose whether you spike or remove enchantments. Dragnmn talk cont 09:20, 15 May 2009 (UTC)

the IP guy was me, and im really not sure what the elite should be. I have seen some mesmers bring icy shackles, and some bring water trident recently. But we really have to wait and see what the new meta is going to be before we make any decisions. Drah 03:55, 16 May 2009 (UTC)

Yeah WT can be really good defensively but I thought with all of the hexes lately, Expel Hexes would be a better choice. Drah McNinja 21:26, 21 May 2009 (UTC)

Wouldn't it be better to swap the SoC on the caller and the GftE on the ranger? Then you could take the attr points out of command on the ranger and spec more into marksmanship and have better spikes with more damage. Or is there an obvious reason that it isn't on the sin and i'm just being a retard

Retrieved from "https://pvx.fandom.com/wiki/Archive_talk:Team_-_Omegaspike_HA?oldid=1112753"
Community content is available under CC-BY-NC-SA 2.5 unless otherwise noted.