Kill the avalanches in the area right before the boss, and then walk backwards to the boss with all the elementals on you. The more elemental agro, the faster it'll be. Should take less than 5 minutes for lvl 2. Life Guardian 17:59, December 2, 2009 (UTC)

i have aggro from all elementals. even tried getting aggro from the spiders just outside. Sliver just doesnt seem to be enuff to kill him. plus cant get that sweet spot where diamond shard doesnt effect you. even after watching video just cant seem to get it. apart from killing the boss the build works great. 81.97.45.88 12:51, March 7, 2010 (UTC)

It takes some practice, but it isn't that difficult to avoid mist. The boss dies pretty easily with 6 or more elementals. I can only suggest raising your evas title for more damage--Relyk talk 00:54, March 8, 2010 (UTC) 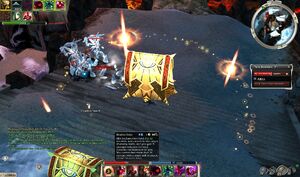 Btw, after watching the video, i can see why you had problems. The guy who did the video is terrible at the boss portion. Life Guardian 02:08, March 9, 2010 (UTC)

well ya it was an old video and not every pull is the same each time. doing this daily for tip runs and it's never a perfect run. some are as fast as 4 mins but at crazy as 30 mins =( And it's the second step area for that sweet spot right? right where the snow starts to over lay the second step. that's were i stand. Chess yang 21:36, March 10, 2010 (UTC)

1st is easy without any cons. I just use something to up energy and something to up attributes for 2nd level for faster kill with boss. And wow, 4 minutes is very little time. Nice. I havent really ran this without running a team for free so i cant say how long it should take. But boss is easy. And the diamondshard grave thing doesnt mean dead. Not even close. Just dont overextend with your energy and you should be fine. I stand in range of it and dont die. Just keep dark escape up and shroud of distress along with SF and youll live. Lasque.Is.Happy. 04:22, October 28, 2010 (UTC)

Alternative Routes and Proof to unlock

does it matter which proof you unlock? Plus i'll try to post the routes i run. I know the office wiki a rout but like to post a few other alternative routs. hence "Alternative routes" Just hate ppl calling and drawing when the route i take is CALLED MY ROUTE not yours. Chess yang 17:44, March 11, 2010 (UTC)

It's actually a little faster/easier to get the switch to the left rather than the one on the right. Either way works though.--Relyk talk 04:08, March 15, 2010 (UTC)

Im still having problems with this build. I thought id try out a practice or two on normal mode before i went for hard mode, and im now on at least the 10th attempt, and I've yet to kill the final boss. Im surviving, but dont seem to be able to deal enough damage. Most recently was there for about 20 mins, but his health seemed just to hang around 90%. Im using intensity (havnt got EBsoH on my sin yet) but am still dealing ~20 damage per sliver hit, any idea what im doing wrong? Jimmylad 22:44, September 10, 2010 (UTC)

At a glance I can't see any reason why an E/A variant wouldn't be just as successful, but I'll admit to having been gone from the game for awhile. Any reason I couldn't learn this on my ele? Ruse Torrent

Damage will be a bit lower because of lower SF cap so itll take longer and youll take more damage due to lower armor. Might also need DP instead of GoS, not sure. But yeah, should work fine on an ele. Life Guardian 01:04, September 17, 2010 (UTC)

Oh, hrm. Yeah, I wasn't thinking correctly. Normally eles get higher earth magic damage, but silly me I wasn't factoring in the cap. -ponder- Well it's worth giving it a go, anyhow. By the way, what are you referring to with DP? GoS I get, but not that abbreviation :)Ruse Torrent

Herp a derp. I should have gotten that one, lol. Thanks. Ruse Torrent

Retrieved from "https://pvx.fandom.com/wiki/Build_talk:A/E_Sepulchre_of_Dragrimmar_Runner?oldid=1128520"
Community content is available under CC-BY-NC-SA 2.5 unless otherwise noted.