yeah i just put this up since i didnt saw it tested builds, didnt check through archived ones. though either that one needs to get fixed since the hunters shot meta is gone, so is IA and this is tagged for low pvp only imo Terran 19:31, November 16, 2009 (UTC)

Eh, this one has a better name, and has no votes on it to vote wipe. We can let this get vetted. ToraenTheJanitor

I thought we agreed a long time ago that we hated this build.

With axes in meta less bleeding is present, having more bleeding going around on top of the poison that rangers spread, it's not "bad"--Ikimono "...And my axe!"

Great build for RA, use to run it all the time in but with lightning reflexes instead of debilitating shot to tabby tab faster and higher WS over marks. Zero.Six 16:22, November 17, 2009 (UTC) 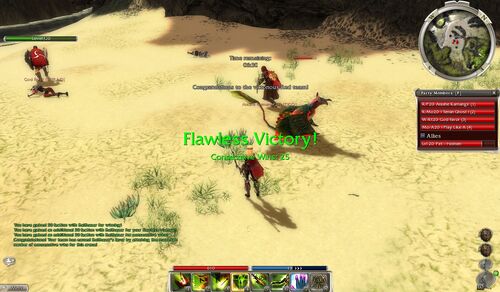 This is pretty good for AB as well, because the degen is easily spread over even the biggest of mobs, or you can solo cap in a similar way to an IA ranger. Either degen a huge group, solo cap a shrine cause lol AI, or piss of casters with interrupts, any way you want it works in AB Kurotou Shadestryke 00:07, November 30, 2009 (UTC)

I would like to revoke my previous statement... don't run this in AB, takes fucking hours to take down something by yourself >.< Kurotou Shadestryke 04:22, November 30, 2009 (UTC)

When did this suddenly become good? I can't remember if something like this was ever vetted but I'm pretty sure it's been trashed numerous times.
Poison Arrow/Barbed is bad because you're constantly using PA so you're less able to interrupt, which is the ranger's main role. Burning Arrow was always sort of bad in the same way, although it's a more useful elite due to its +damage. 129.67.169.61 18:23, November 30, 2009 (UTC)

Normally, I'd be on your side Random IP Address, because I've helped trash this numerous times. However, you should notice that this build is only tagged for RA & CM, both of which benefit from long-lasting poison+bleeding spam. You shouldn't be "constantly using PA", you should just be just tab spamming it every once in a while and then focusing on 'rupting. BA is better than this in many areas, but in RA and CM this is decent. Karate

Yeah, pretty much what jesus said... this build should NEVER be used in anything other than RA or CM, but its damn effective in RA. Either the other team doesn't have a monk, and this drains their health crazy fast in tandem with the rest of your team, OR they do have a monk and this pressures the fuck outta their energy. Its very good in RA, but not so much anywhere else Kurotou Shadestryke 21:53, November 30, 2009 (UTC)

Been running a variant in RA for over a month now, with Blackout (Dom 6) and Antidote Signet (replace Debilitating Shot and Mending Touch). This last week I'm seeing a significant uptick in general use of Blackout, esp. on Rangers, and Poison Arrow builds both. Blackout does not replace skillful 'rupts, rather expands your capacity for shutdown.

Few key notes on Blackout: Kill adrenaline buildup from enraging charge early, or adrenaline anytime to dramatically slow down warriors, paragons and some sins (backbreaker fail). Blackout cuts through blocking and pious concentration. With Savage you can shut down a second rez sig until Dshot recharges, thus dramatically improving your ability to maintain your kill advantage. Monks will often need to heal just after Blackout recharge, so sometimes you can anticipate a 'rupt. Versus two monks, Dshot a WoH, and Blackout other Mo to score kills. Be aware of your positioning so you don't have long runs to desireable Blackout targets, and use Natural Stride to close quickly.

Expertise 14 (12+1+1), Wilderness 12 (11+1), Domination 6. No points in Marks. So you get 7 secs of Natural Stride, 4 secs Blackout, and can spam your skill bar with no energy worries. Rotwing Recurve Bow is ideal. Non-bonus damage bow attacks at 9-11 marks do negligible damage, so dropping Marks is hardly a loss. Compare to Magebane, you get both more pressure, and more disruption. --ClavisRa 21:35, January 12, 2010 (UTC)

I already addressed that point in my remarks. The points in Marsmanship do not pay off with your slow attack rate. You get more resiliant and effective build with those points in Wild and Expert. Way ahead of you, cause I had the same inclination until I tested it.--ClavisRa 05:42, January 13, 2010 (UTC)

poison/bleeding duration last already long and how are you gonna do extra damage when foes are suffering from poison/bleeding? bow damage IS needed, this way you can finish off foes yourself much quicker Terran 17:26, January 13, 2010 (UTC)