Well, this is for Heroes, so it would have to be Resurrection Signet, a low specced Death Pact Signet/Flesh of My Flesh. ــмıкεнaшк 16:51, 13 October 2008 (EDT)

A lot of player choose Vengeance as a in-battle rez for PvE nowadays because it is a full health/energy hard res. --Afflicted pikachu 16:54, 13 October 2008 (EDT)

^ /agreed. If a lot of good players nowadays use Vengeance as a res, guild wars has certainly lowered it's standards a lot hasn't it? Or maybe you're just playing with really shitty players. Ŀ¥ЅЅΔΝ●55! 16:56, 13 October 2008 (EDT)

(lotsa EC) Ya, Vengeance can prove to be a liability in Hard Mode, and having to re-resurrect that ally will slow your team down. Death Pact Signet<FoMF with all of the Soul Reaping, too. The Healers will have more than enough energy to heal the two at 50% health, and the low energy isn't an issue with Soul Reaping. ــмıкεнaшк 16:57, 13 October 2008 (EDT)

Vengeance is not shitty why do you hate it so much? It has full health and energy ressurect, prevents further dp and can give a pair of fresh minions after 30 seconds. --Afflicted pikachu 16:58, 13 October 2008 (EDT)

Vengeance has to be cast once, after that you disable it and use fomf, not rocket science! You keep saying that its bad without giving any viable arguments against it.
FoMF > DPS generally, what makes it good is dp prevention on HM. --Afflicted pikachu 17:01, 13 October 2008 (EDT)

(more EC) It can be good in the right builds, but having to re-resurrect the ally after he dies again will slow your team down, and the point of Discord is to rip through everything you face. I'd also like to see some more anti-melee (mostly Shadow of Fear and Meekness because of the AoE and the fact that you can maintain them) and maybe one copy of Foul Feast to mop up any conditions that MBaS can't get (in case the spirits get killed, or because an area might have an overload of conditions). ــмıкεнaшк 17:06, 13 October 2008 (EDT)

You wont be dieing often, understand it, but in case something dies you quickly ressurect it and at gets into the fight at full force + is being saved from further DP, and thats a good thing because it would have some dp allready. Get it; it prevents DP stacking on a character. After battle has passed it dies yes, you raise some minions and res it with fomf, 4 seconds wont slow you down a lot. --Afflicted pikachu 17:10, 13 October 2008 (EDT)

Deaths that occur within 5 seconds of being resurrected do not count towards your DP. Five seconds is more than enough to heal and prot a newly resurrected ally. You're actually better off letting that same character die again then letting someone else die. Also, I'm saying you should use Flesh of My Flesh, not Death Pact Signet. ــмıкεнaшк 17:16, 13 October 2008 (EDT)

You also say that you can't use Death Pact Signet because if they die again, you could lose minions, but it's the same with Vengeance, except they will die, so any minions they raise within those 30 seconds will be lost. I just don't see the advantages to it in this particular build. ــмıкεнaшк 17:22, 13 October 2008 (EDT)

If they die again, you dain again and lose minions with Vengeance you can get that. But you have found and interesting point that you cant use vengence on two of your charatcer who have minions unless you cant think and thats no good. --Afflicted pikachu 17:26, 13 October 2008 (EDT)

I can get dps instead of Vengeance only if there are no minions on this character, get it, otherwise you are running into a risk of loosing some of you minion wall which is pretty bad. What about Shadow of Fear or Reckless Haste? - Good aoe hexes, can feed Discord and defend from melee, in that case I will change the ress to dps to stop you from moaning. You have to have one of them anyway. --Afflicted pikachu 17:10, 13 October 2008 (EDT)

if DPS snowballs, you shouldn't let someone die every 2 minutes. Also, just take a rez sig for a fast, strong rez. --›

Mike had made a valid point, I have made some changes to the curse discord and prot necro, hope thats sorted, any other ideas? --Afflicted pikachu 17:33, 13 October 2008 (EDT)

You'll want to put most on Guard, so they use their offensive spells (ARage, Putrid Bile...). --›

I gtg for now so can anyone finish writing team composition up for me please? Thanks. --Afflicted pikachu 17:44, 13 October 2008 (EDT)

Because you have room for a million prots/heals/utilities, and heroes don't play physical builds very well, tbh. I'm working on a physical build in my Sandbox, but the IA nerf hurts. :( ــмıкεнaшк 18:26, 13 October 2008 (EDT)

Huh? 1) Imbagons make prots nearly useless. 2) Paragons do fine at healing, especially with multiple paragons on the team. 3) Paragons and rangers have an epic amount of utility. 4) Heroes are only bad at running melee, they're just fine with paragons and rangers. A paragon without PvE-only skills will usually out-damage a warrior without PvE-only skills in PvE anyway. If you run all ranged attackers, its also easier to get the damage bonus from EBSoH on more party members. 5) IA rangers buffed with Ignite Arrows and EBSoH will still out damage just about anything else even with the nerf.
Btw, every character on this team is spending half their time spamming discord. The extra utility they get by running discord for just about all your damage is severely diminished because of that.
See here for my physical team. The talk page also has some relevant arguments. — Teh Uber Pwnzer 18:58, 13 October 2008 (EDT)

What?! How come physicals have better healing than casters, I have never heard of w/rt or p/rt healers being any good sorry!!! --Afflicted pikachu 09:35, 14 October 2008 (EDT)
(EC)Unless they're set to Fight, they'll usually stay around the Imbagon, if only because he uses a Spear (and that's how heroes position themselves, based on the weapons everyone's wielding). Devona is a bitch, though, because you can't change her combat mode, and I'm pretty sure she's always set to "Fight", so she runs off quite often. A Warrior (or Dervish, which I prefer for the more constant AoE) will also deal plenty more damage than a Paragon or Ranger because of the higher attack rates and higher additional damage in their attack skills, just bring an IMS, tbh.
Also, to Afflicted Pikachu, Paragons can use gimmick/novelty team builds like having a million shouts and chants (namely Motivation) to trigger Finale of Restoration to Heal, and Imbagons offer the best (or one of the best, at least) damage reduction in the game, meaning you can play with just one or two devoted healers. ــмıкεнaшк 09:39, 14 October 2008 (EDT)

I know that they can provide best damage mitigation ingame perfectly well Mike, and I know that several motivation paragons can form quite a fortress, but they cant heal as well compared to N/Rt, N/Mo, Rits and Monks can they? --Afflicted pikachu 10:02, 14 October 2008 (EDT)

@Beans:
1) 10 lead, 8+1 command, hmm, what does that leave for a spear? Oh right, it leaves you with 12+1+1 on spear. On my build its a bit less due to them also being the primary healers, but it adds more room on other characters. Two higher in spear would only add 8% more damage, anyway. I just now did the math, and assuming lvl 20 foes with 60 armor (which is quite low, average on hardmode is probably lvl 28 with 100 armor, making the returns even lower), its still a mere +4 damage. Bringing a conjure is also dumb, because then you don't get the benefit of OoP.
2) I also don't see why "Spear attacks just don't hurt that much." The base damage for spears are 14-27. The base damage for axes are 6-28. Sure, spears attack .17 seconds slower, but the eight higher minimum damage makes up for it. And don't say that the one higher maximum damage on the axe pushes it over spears with higher crits, because unless you haven't noticed, you crit way less often against level 30 hard mode enemies. If you were talking about attack skills, your still wrong. Stunning Strike, Vicious Attack, Spear of Redemption, Blazing Spear, Spear of Lightning and Wild Throw are all amazing spear attacks that either out-damage comparable skills or bring utility that cannot be beaten.
3) Bringing an IMS is not enough to make up for the loss of damage caused by moving. Did you know that you cannot attack while moving? Every second you spend moving (which is a lot in HM due to increased movement speeds and better AI), you miss out on an attack. This adds up to be a ton of damage with attacks hitting for up to 100 damage. By being in melee and forced to move around, you're also usually out of EBSoH range. Having 13 strength doesn't even make up for the EBSoH damage lost, as it only works on attack skills and only the base damage.
4) Casting a skill every 7 or so seconds on two Paragons makes bringing dedicated healers unnecessary. With this, you have a lot more room for more offense (or hybrids, in the case of my build).
5) Equipping a hero with material weapon and a shield makes them kite around way less often. They shouldn't be wandering out of shout range very often at all. Other than that, the only things you have to prot are warrior bosses and the occasional boss that has an armor ignoring spell. In either case, Xinrae's Weapon (which doubles as being quite powerful offensively!!!) should suffice.
6) Just because you did the same...Gfg. You make me lol. Please don't be dumb.
@pikachu, no, a single paragon will never out-heal a rit, n/rt or monk. However, multiple paragons together can out-heal multiple them in terms of pure healing. The reason I added "in terms of pure healing," is this: Paragons suck at spot healing. So, even with multiple paragons, you will still want somebody on your team with spot heals (in my build's case, the n/rt and rit carry them). The best part, though, is that paragons can still deal tons of damage even while acting as a healer. — Teh Uber Pwnzer 19:55, 14 October 2008 (EDT) 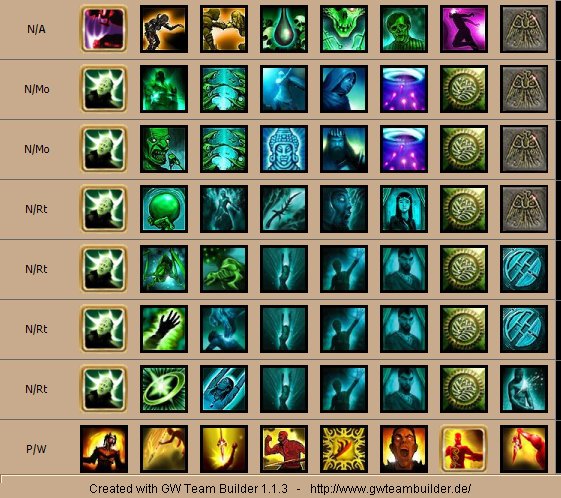 Not saying it's better but that's what I threw together in ~2 minutes. Godbox

Its good actually, but not very versatile because you must have a promise spiker and imbagon, it also could have more minions. What code did you use to make this build? I never seen anythig like it. --Afflicted pikachu 10:26, 14 October 2008 (EDT)

Look at the bottom; Teambuilder. --›

The difference between trial and stub is only that in trial the build page itself is finished - which it is. Godbox

Retrieved from "https://pvx.fandom.com/wiki/Build_talk:Team_-_2_Man_Discordway?oldid=716879"
Community content is available under CC-BY-NC-SA 2.5 unless otherwise noted.