Note that this team is a combination of all the 600/Smite builds, with the exception of Build:Team - 600 Famine/Smite Farm and Build:Team - SoO 3 Man HM as they are completely different concepts. Avatar Kuzon 03:54, 14 March 2009 (UTC)

Obviously very solid builds that work. The optionals listed are pretty much the best optionals to take.(pr0adam)

So, main question. Wich dungeon can this farm in HM?

All of them except Bogroot Growths and Bloodstone Caves. (Too many Stormcloud Incubus. Avatar Kuzon 23:22, 14 March 2009 (UTC)

Yeah pretty much, serious variants for each dungeon though. Sometimes a perma is needed. If each variant for each dungeon was posted though, that would be very convenient for all the 600s out there that are still running CoF.(pr0adam)

Yes, I was thinking the same thing. Maybe I'll integrate that in a couple hours. Avatar Kuzon 23:53, 14 March 2009 (UTC)
It would be nice but than like, all the builds will be revealed(which is good and bad), expect dungeon run prices to drop sharply (pr0adam)

TBH, I dont think we need a general 600/smite page. Each different area has a long, specific usage which warrants their own pages. The exception would be a guide, maybe something like Guide:600/Smite/QZ Dungeons. But right now we have 4 Mo/? 600/Smite builds that are vetted great, that I know of. 4 isnt really worth combining imo. If we get more, merge them all. ---

What about frostmaws burrows? As much as i know it's almost impossible to get past incubus (in second level i think).Hell Darkknight 08:33, 15 March 2009 (UTC)

pretty much u stole my build and removed all the SoO specific skills. very very creative of u.

I didn't steal anything. This is a combination of all builds, and if you read above, I said that your build was exempt from the merge as it's a completely different concept. Avatar Kuzon 19:32, 15 March 2009 (UTC)

I just tried it in Tombs of primeval kings, but I failed because they use Fingers of chaos, wich remove enchantments from monks. Kinda fun, 'cause tombs are known as place for noobs :).--ValeV 20:42, 15 March 2009 (UTC)

Some people like repeating what others say to make them look cool. But trying to look cool on the internet is like the special olympics. It doesnt matter what happens, your still retarded. ---

Hence the 95% of all areas in the game. Also ress, in response to your statement about not merging them until we get more. I think we should merge them so we don't have to go through the trouble of vetting others, just to merge them all. Just get it done and over with. Guides for specific areas can always be integrated into this one, some of which I am working on at the moment. Avatar Kuzon 22:53, 15 March 2009 (UTC)

There's a difference between trying to look cool and just agreeing... Just because this is PvX doesn't mean everyone has to argue all the time... Anyway Obby flesh is all well and good but if you are a Monk or /Monk at all you will lose enchantments when hit by Fingers of Chaos, and Obby Flesh won't stop that (it's not a spell, it's a stance which buffs their attacks). This is possible to farm if you don't go /monk, however. 86.10.9.66 19:08, 17 March 2009 (UTC)

don't like the idea of merging with the Famine build. It's a totally different idea. Most areas work well with both, but following that logic, you could merge almost every build >.>

Then take the delete tag off?

Is it worth mentioning

that taking Greater Conflagration (on the ranger) and Storm Chaser (on the 600) results in lolpveisajoke e-management?

So does Essence Bond and Balthazar's spirit if you dont suck. The main energy cost in 600ing is setting up, which storm chaser makes saddening with an additional 14 energy. If youre running out of energy anywhere where there isnt debilitating shot, ur bad. ---

Whenever i Smite i usually bring BUH, for BIG DOMMAGE n stuffs. Also, you can go as Me/Mo Smiter w/ Sig of Illusions as your Elite. If you feel like adding that in.Dont know why the QZ has a 20% enchant weapon on equip,its enchants are maintained.Fawx

I really don't see the point in using a Me/Mo smiter. So you cast the 4 maintained enchantments a bit faster, so what? It's not like you're gonna fap for those 3 seconds. And you can also just switch out the headpieces if you're a Mo/Me which will make it 16/16. Even if it's a hero Mo/Me, it's not like +1 extra point in Life Attunement and Vital Blessing is going to make a difference. Me/Mo's also don't have access to Blood is Power and Unyielding Aura, which is stupid. I'm not adding it. Avatar Kuzon 23:58, 17 March 2009 (UTC)

But it takes 15 more seconds to recharge. So if you rationalize it, BUH > Intensity.

Made note of the Me/Mo not because Me/Mo > Mo/ but because i wanted to show that you CAN use a mesmer primary if say you dont have a monk.Fawx

Never was referring to Me/Mo hero, i guess you could do that. As a HUMAN smiter you can go Me/Mo though. Which is what the statement was about anyways...Fawx

I agree that the 20% enchant weapon makes no sense, a +1 smiting is about all that could be useful (edit: oops, just realized you were talking about the QZ, I was looking at the smiter. Same story though about 20% not helping)--Chump Chief 19:30, 13 August 2009 (UTC)

Have something like this: User:Benjammn311/Sandbox#General_600.2FSmite. Bascially, I'm suggesting to add an Any/Monk build like the one on my sandbox with suggestions for each primary outside of Monk. Should this be on this page, or should I make a new build page for it?

Has no point. Specific builds are actually useful. Life

Guides have no point either. Specific builds are actually useful. Life

No, specific builds are like the SoO build. A guide is tl;dr. Life

See, all these builds have basically the same usage. A simple note at the bottom saying to use spirit shackles to wtfpwn monks would be more effective than a lengthy guide. Life

Going to have to agree, one general>bunch of similar. Either you get the concept of 600/smite/qz, or you don't. General would cover the concept, guides or -- better -- a note at the bottom for problem areas would be better. Also make traffic looking for great builds funnel more towards one build, instead of reading and comparing four.Kyle van der Meer 04:22, 18 March 2009 (UTC)

I think that both are useful. Guides are for complete noobs to the subject: they are willing to read tl;dr if it means that they understand the concept fully. Specific builds allow people who are looking for a particular area/item to farm to find them easily.

So what is sounds like is that we need one general guide with the extreme basics of 600/smiting, and then individual builds that all link back to the guide and mention the specifics of the build on the build page. Life

The only one worth mentioning is the Rt/Mo. How the D/Mo got vetted, Ill never understand. Anyways, the Rt/Mo is a vastly different build to any Mo/?. It would be like combining the A/E perma with a E/Me Obs Flesh tank and making a thing called "Tank Build." ---

Just going to fix one misnomer on the build page. Stygain veil can be farmed with a build like This--IkimonoNeeds more Paragon

Is Getting Pretty Common.

I think I've made a pretty good point about why SoI smiters suck. I really don't see the point in using a Me/Mo smiter. So you cast the 4 maintained enchantments a bit faster, so what? It's not like you're gonna fap for those 3 seconds. And you can also just switch out the headpieces if you're a Mo/Me which will make it 16/16. Even if it's a hero Mo/Me, it's not like +1 extra point in Life Attunement and Vital Blessing is going to make a difference. Me/Mo's also don't have access to Blood is Power and Unyielding Aura, which is stupid. Avatar Kuzon 19:36, 21 March 2009 (UTC)

Heroes can have 16/16, too, just requires an inv slot and Exp/Sup Salvage kit. Other than that; who the fork cares about the 16th point in Prot? It's not like you can't survive without it, and BiP/UA/etc. are 9001x better than SoI. It's pointless. ---

This is blasphemy Fox007 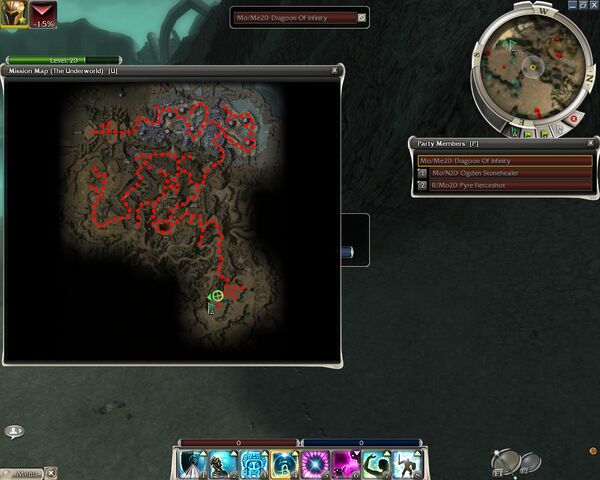 I could have been able to do the whole UW, but I accidently flagged my heroes in the wrong spot and all the mindblades spawned right where they were. Don't worry....I WILL have a screen shot of this team in front of the UW Chest, eventually. Avatar Kuzon 17:46, 31 March 2009 (UTC)

How did you get past the Obsidian Behemots?

I would guess that he tanked while the hero ran by. Life

Btw Avatar, you'll never do UW solo like that. 4H is a bitch, and you'll need IAU for pools. Life

Well, Pain Inverter only makes the run faster, so swap that for I Am Unstoppable? Then you still can Pools. how do u tank against two sides during the horseman quest ?

I just tried to vanquish Jaga Moraine and Dalada Uplands, but I couldn't. In JM there is a ele boss with his army and all remove 1 enhantment from me and daze me. So, I couldn't kill it. Fail. In DU there was a charr monk who just was just healing himself and it was inpossible to kill. So, this build is great in theory, but, I think, fail in fanquishing. There is always some type of monster you can't kill. :/--ValeV 20:17, 29 April 2009 (UTC)

You have to know what you're going to face, and plan accordingly. I cba to look up the ele, so I can't help you there. Against charr, bring Pain Inverter, EVAS, etc. There are some places that you can't do, due to weird enchant removal, but SB should stop most kinds of enchant removal. Life

again:but it looks like he has 1000000 energy. It will take like 1 hour to get him on zero energy. Still, I'll put spirit shackles or whatever on ranger. Ty for advice.--ValeV

Putting it on the ranger would be stupid. Using Pain Inverter/shackles on you should make him drop pretty quickly. Life

I think we should make a page on the places this build can farm, the difficulty of the area, profitability, what skills to take, etc. I'd make a stub but it would probably be deleted as I haven't farmed with this a lot yet. Maskeus 16:01, January 16, 2010 (UTC)

Can this build still be used with the recent update?

Retrieved from "https://pvx.fandom.com/wiki/Build_talk:Team_-_600/Smite/QZ?oldid=1120759"
Community content is available under CC-BY-NC-SA 2.5 unless otherwise noted.