Previous farming methods can be found in the Archive.

Previous Items can be found in the Past Collections.

Week of November 29 ( 2 Piles of Elemental Dust per gift)

Leave Eye of the North and head West into the Battledepths.

Chilling and Whirling Wisps lack stance/enchantment removal, degen, or interrupts (all of the counters to 55 Monks), and their self heal is rather weak.

If you use SoS, be sure to spread your spirits out - Scythe attacks and Banishing Strikes from the Whirling Wisps will wipe them out quickly if they are bunched up.

You should encounter around 16 Wisps heading towards King Jalis Ironhammer, and then 8~10 more heading towards Heart of the Shiverpeaks. Elemental Dust drops roughly 20-30% of the time.

The other enemies in the Battledepths will also drop dust, but they may take much more effort to take down than Wisps. Avalanches will use Maelstrom, be ready to deal with that if your build relies on not being interrupted. 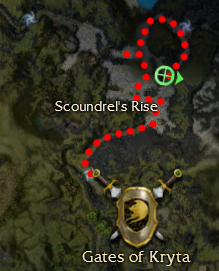 Scoundrel's Rise is a pretty easy place to farm for these for a solo Spirit Farmer. Going out from Gates of Kryta, you encounter numerous mobs of fairly low-level Mergoyle Wavebreakers and Mergoyles (lvl 12). The run above usually gives around 5-7 drops per solo run.

The Mergoyle Wavebreakers are Water Elementalists and do low damage (Deep Freeze is the highest damage spell they will cast), but take a self-heal or health regen in case you encounter (and you will) Bog Skales, which will apply some moderate health degen on you.

Never needed a heal and I just ran straight into the enemy mobs. It's so easy, they do like 2 damage a hit and 2 degen. The only real threat is soul barbs, but they only have so many hexes so even if they do soul barbs first and then 1 of every hex the skales and mergoyles have, it still wont be a lot of damage. Necromas 19:36, November 24, 2010 (UTC)

The "safest" way is to farm the Sunjiang District. The Shrio'ken foes here are (4) levels weaker than those at the Raisu Palace. The multitude of Constructs found here, however, do prove to be an interesting impediment to "easy farming".

Raisu Palace is much faster with very little risk if done right. Enter with SoS build (or other high damage build) and pick up two chars to start (Talon and Danika are good choices here). You will have 4 NPCs with you (they don't count against drops). Once in, turn to the left and wait for a group to pat into you (don't pull them all at once). There are 5 total in this left group (actually 2 groups) and can easily be farmed in about 2 minutes. Usually drops one or two stones. Rinse and repeat.

Panyang Penninsula is a fair place to farm solo as a spirit farmer. Start from Tsumei Village and work your way southwest. 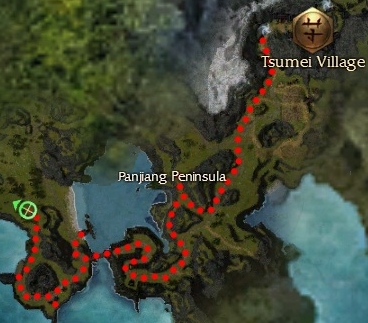 Better: Obtain the quest "The Siege at Tsumei Village" and farm the 9 mobs from both sides of Tsumei Village with a spirit farmer. Nice because they come to you, rather than you having to go find them. ^^

Enter Magus Stones from Rata Sum, Head south to a path where several groups of Spiders can be found. Spirit Spammer works great. 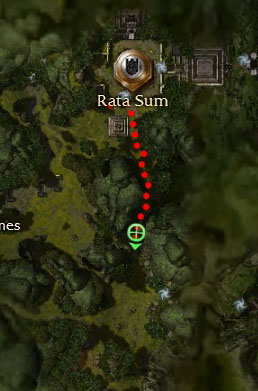 Enter Riven Earth from Rata Sum, taking the left path. Follow the path to trigger spawns of Spiders near trees. a little ways before the entrance to where the mission G.O.L.E.M. takes place, there is an area on the right side of the path with spider webs on the trees, enter here carefully as pulling more then one group can be dangerous.

In Magus Stones, right by Arachni's Haunt, are multiple mobs of spiders, with an easy re-zone and an adjacent res shrine for those in need. Better yet, Nicholas and Yakkington are bathing in the cool waters nearby.

Retrieved from "https://pvx.fandom.com/wiki/Guide:Nicholas_the_Traveler_Farming?oldid=1134486"
Community content is available under CC-BY-NC-SA 2.5 unless otherwise noted.