took me 15 minutes, whacked em with a scythe--

I got some unintentionally by doing the quest gww:Service: In Defense of the Eye. That may ultimately be the easiest place to farm these - the Modniir come to you rather than galloping around an explorable where you have to run to them. It has the added benefit of a quest reward including some EV points iirc.--War_Pig5 11:02, December 9, 2009 (UTC)

The difference is in Deldrimor Bowl you literally could just want them all to death. 14:31, December 9, 2009 (UTC) The Crippster

I just went MM and let them do all the work. It's hilarious what level 19 Minions do to lvl 8 mobs. --Curse You

I solo'd with my assassin, using the A/D build. Actually, the Mystic Regen can be dropped, because Way of Perfection should heal you perfectly if you have max armor. --Juze 07:27, December 11, 2009 (UTC)

I spirit spammed this place with my sin. 15 manes = 10 minutes

Pretty much anything. You just have to watch out for the dark priests, since they have spirits and rupture. But all the other grawls (even the paras) are melee, so....like I said....anything will do the job. Karate

600 Smited these with the 100b Wtank from MHSC minus the anti kds, went for essence bond & sun and moon slash, took an hour to get 30 necklaces ( 15 each ) [ can kill warrior boss but 9 grawl dark preists is too difficult for the ritualist boss, he self heals himself fully with two casts and can rez all his allies with restoration + rupture soul.] --Alex ! 18:20, December 14, 2009 (UTC)

Easy farm with perma. Run a sliver build with DC and run to Rragars. Outside of Rragars there is a large mob of stones and grawls. Gather them and bring them to the 2nd tree to the left. Go in the bush and you are stuck. DC to the outside monster and they are now wall-blocked. Sliver and rezone. --65.0.109.30 03:23, December 15, 2009 (UTC)

If you're body blocking them why bother to sliver instead of some quality PBAOE? 14:53, December 15, 2009 (UTC) The Crippster

Look for a big tree that might be near a wall or other object that would easily body block monsters. I'd bet it's similar to stygian farming, tbh. ··· Danny Hates Snow 04:19, 17 December 2009 (UTC)

please i dont know, never did this, ill give a black dye to show me exactly!

ive been asking for hours. they all rage.

First of all, sign your comments. second, look up a chambers video on youtube for uwsc, there should be similar techniques shown in the video. the only difference is you use DC to get on the outside of the mob. 13:59, December 17, 2009 (UTC) The Crippster

what mob!!!! god theres a tree theres a bush there over tons of them! god i know the technique not the AREA!Lithril

Have you looked around the area for what is probably the biggest and largest tree there? It's going to be something used to bodyblock mobs, so it's probably not any of the trees that are in the middle of the area. ··· Danny Hates Snow 00:15, 18 December 2009 (UTC)

Leaving from Rragar's, go to the rez shrine. You can go right or left around the rock behind the shrine. Go left. You will immediately notice a red tree right next to the wall, on your right. Go straight just a little and you will see a comparatively large green one, growing right next to the rock. It is the one you want. Spero Lux 01:36, December 18, 2009 (UTC)

Here is a screenshot of where the stuck spot is:

I disagree with the main page on perma-dagger - it takes forever in NM (and yes, I tried stance removal), and I imagine HM is worse. A NM run like Build:A/E_Perma_Sliver_Form with a run skill like Dash to break aggro with the afflicted was much faster in my testing. I also tried degen, which works, but doesn't kill the boss (at least very fast and I got 2 shells twice from him), so which is better is debatable. I also recommend the following path with a perma because it avoids Am Fah (and thus Spike Trap and Barbed Signet) - note that the upper left most red dot around the green loop is a ramp downward (so don't miss it - afflicted should run up it) and the red dot to the left of the end of green path is the merchant: 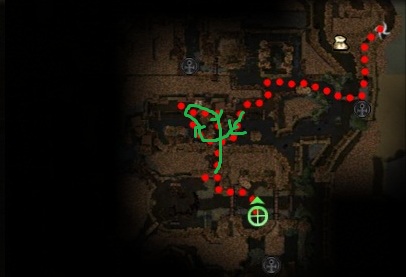 If you want to keep a track of what items have previously been asked for just go to Past Collections on the player based wiki site to review what items to keep and not keep. Do not clutter up the farming guide's main page with irrelevant data. If we kept that sort of data on the main page it would take forever to reach the data relevant to the farming. If it makes you happy I will link the page for past items onto the main page of the guide. --Jarad the Devarkin 08:16, December 28, 2009 (UTC)

Ideas? I heard they actually drop in the challenge mission with tons of corsairs in it, might be decent if you need hero armor too. My Soles Are Bad 16:35, December 28, 2009 (UTC)

Removed the note suggesting Perma-sliver. Even with EBSoH, you simply do not do enough damage that way to effectively farm. Maybe someone can find a way to more effectively kill the Corsairs, but since this is about efficiency, I doubt it's worth it.Newms34 19:20, December 29, 2009 (UTC)

Removed note suggesting to farm corsairs in Nundu Bay, because there aren't any corsairs in that mission. And yes, I spirit spammed my way through all those margonites to find that out the hard way. Targren 22:22, December 31, 2009 (UTC)

I just Spirit Spammed to the Traveler (with a SOLS hero) and picked up 6 Gold Doubloons along the way. Worked well enough.

Retrieved from "https://pvx.fandom.com/wiki/Guide_talk:Nicholas_the_Traveler_Farming/December_2009?oldid=1011929"
Community content is available under CC-BY-NC-SA 2.5 unless otherwise noted.