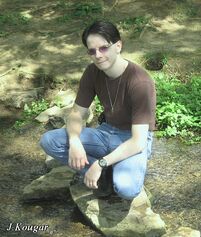 If you're interested, you can also visit my Beauty of Ascalon page.

I guess I cannot claim to be a casual player, since I tend to play anywhere from four to ten hours a day on most days anymore. I have more than a half-dozen accounts (why oh why wasn't the option to buy extra character slots added sooner) and all but one or two of them have all three campaigns merged with them, some collector's edition versions, some not.

I've also logged more than six thousand hours of play since I joined Guild Wars over two years ago, and I don't spend time signed-in but 'away' like some folks do, and I've never fooled with death-leveling or other such AFK game activities... and I did stop playing altogether for several months at one point in my first year.

I could say that I have almost sixty characters but that would be inaccurate because some are just storage mules and some are classes that were nerfed to the point that they were no longer playable and now just sit there collecting dust.

I play a lot of PvP as well as PvE and have of course beaten all the campaigns with either just henchmen or henchmen and my fiance. My fiance is also a huge Guild Wars player, he spends more time going over skills and comparing DPS and usability in any given situation, than even I do. We are both very much against cookie-cutter builds or using builds from websites, and create all of our own... this does tend to sometimes make us popular or unpopular depending on if we are working with or against others, but ultimately it's far more rewarding and satisfying for us both. We are looking forward to Eyes of The North but are still skeptical about getting involved with GW2. ~ J.Kougar

My fiance occasionally posts on this Wiki as well, and obviously from the same IP. He is registered though, and his comments are signed " ~ Sabastian ". FYI for the curious.

Retrieved from "https://pvx.fandom.com/wiki/User:J.Kougar?oldid=238114"
Community content is available under CC-BY-NC-SA 2.5 unless otherwise noted.