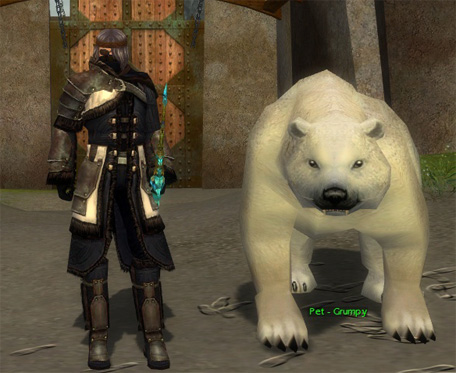 In order of how they appear on my character select screen

Notes: Would like to beat Proph.. preferrably when I can afford to buy one of the gold Deldrimor items.

Lamentia Verrys (N/Me)
- Prophecies: Droknar's Forge (by way of run from Beacon's Perch)
- Factions: The Defenders of the Forest
- Nightfall: Heart or Mind: Ronjok in Danger
- Eye of the North: What Must Be Done (haven't started Norn or Asura)

Notes: Acquire Vabbian armor (one day) as well as cap a few more elites such as Spoil Victor and Order of Undeath.

Toshiro Battousai (D/x)
- Prophecies: Lion's Arch
- Factions: Vizunah Square (Foreign Quarter)
- Nightfall: Gate of Madness
- Eye of the North: What Must Be Done (exactly the same as my necro, albeit by complete coincidence)

Notes: Has more or less become neglected and taken on Mule status, but I'd be willing to tag along for any of the above missions and quests to see if he's still any fun. Maybe I'll try him out in PvP.

Notes: Not sure what else to do with this guy. Farming and Vanquishing?

Izanagi Kagachi (Rt/N)
- Prophecies: Bergen Hot Springs
- Factions: Completed
- Nightfall: Heart or Mind: Ronjok in Danger
- Eye of the North: Working on Norn, have only completed Curse of the Nornbear

Notes: progress futher into Nightfall, cap skills such as Weapon of Remedy, Reclaim Essence, and Caretaker's Charge. Would like to do the run to Sanctum Cay, etc, to eventually acquire more areas to farm.

Notes: Would like to finish both EOTN and NF for specific end-game greens. Cap more elites all around, such as Restore Condition, Blessed Light, and Defender's Zeal

Notes: Wouldn't mind beating EOTN. Mainly being used for PvP at the moment. Wouldn't mind taking his "Save Yourselves!" out for a bit more HM.

Retrieved from "https://pvx.fandom.com/wiki/User:PVX-Crashingthrough?oldid=839625"
Community content is available under CC-BY-NC-SA 2.5 unless otherwise noted.