Although I normally run PoD (in the few times that I actually run it) I posted corrupt on the wiki because it seems to be the most commonly ran and its still extremely effective. Taking a hammer over Warrior's Endurance defeats a large point of the build; which is actually getting those 1 second kills if the monk doesnt precast woh. Ballistick 17:27, 2 December 2008 (EST)

I saw you today in RA and said hi LOLOLOL

Hi, I am a euro warrior that is able to play at american times. I'm the best 321'er in the game, and I also am good at flagger pushes, because shadow prison allows me. I enjoy screaming on vent and telling my monks that they're bad when I die during a monk push, just because I permafrenzy. I play very offensive with my 4 monk backline. PM me ingame at Yush Mistress. —ǘŋƐxɩsƫ 07:10, 12 December 2008 (EST)

lollllllll. just so I never have to say this again, there is a reason I am not an admin or bm (and never will be). I just don't give a shit. I did however get my smurf account nominated, which makes me feel special. --Readem 19:51, 22 December 2008 (EST)

Yes you do, you're just surrounded by idiots (introspectively)-- 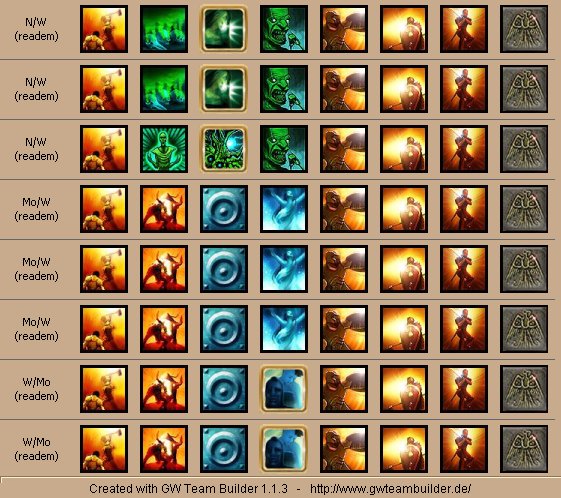 KFC's dead. Just like my proud for you. —ǥrɩɳsɧƴɖɩđđɭɘş

So... why did you reform and copy such a shitter guild tag? Thats like copying QuCo or something. Rawrawr Dinosaur 19:33, 9 January 2009 (EST) 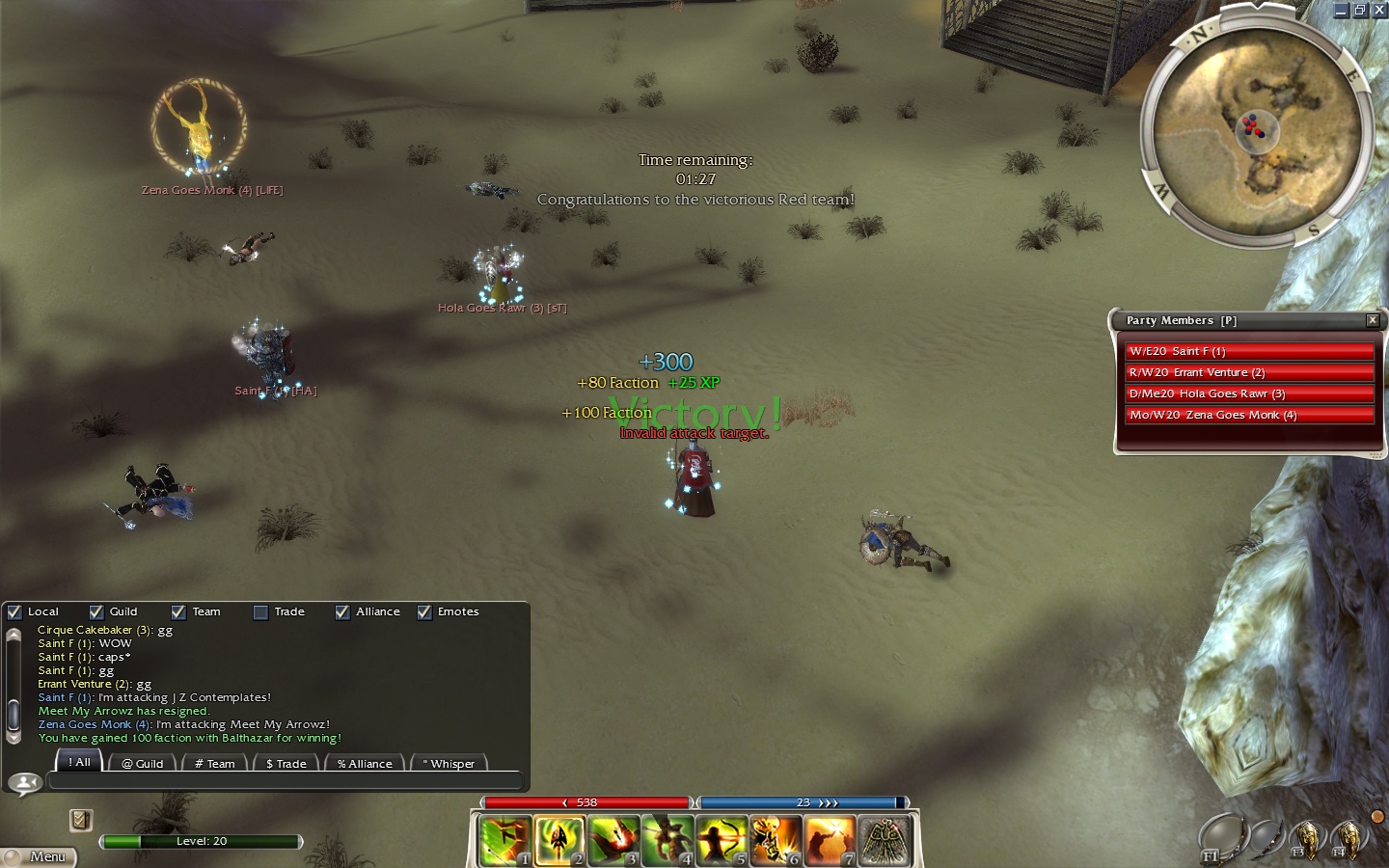 oic, anyway cirque pmed us after asking for the bars, apparently he wanted to try the build out. Made me feel all warm and fuzzy inside--Golden

orly? what'd he end up running, cuz i don't think saint wanted to give him the bars--Golden

Let me rephrase, is it true that blocks(The things that stop dem from hitting u) win games?

That this talk page was protected. —ǥrɩɳsɧƴɖɩđđɭɘş

I've blocked you for PvX:1RV on Build:W/E Conjure Hundred Blades, for re-applying your vote, without a change of score or reason, several times. I know you mean well so it's only a short block, but remember in future that if you disagree with a removal, bring it up on the BM/Admins talk page, or the AN. ~ PheNaxKian Sysop 11:28, 21 January 2009 (EST)

You mentioned him sometimes, can i just ask who is this Pyth? IGN:> Massive

hawt, yes.. But ye he plays WoD + Stances very good. Only downside is that he runs insidious which is nice sins war cant pretty much train him, and they always FUCKING play on chinese servers (ohai 400ping) which makes it pretty fucking annoying to interrupt shizzle :> Massive

I thought saints pic of him (and alex and 2 other people, i believe a straw and golden was involved) beating cirque's team was better, cause they went on and stole the build he was using.

Altough it is kinda boring since whenever i played vs him they had chinese servers = 450ping~ on overall, if not we would have wiped their mawnk in 20sec:P Also i've also beaten Cirque not posted pic thou, just tought it was bit funny about the pyth one, as we had this discussion:P Anyways Readem said im not cool, so suppose i aint then :( Massive

Lol, playing in a dead game won't make you better, it will just make you think you are better. -

I look forwards to progressing my skills under the guidance and tutorage of Badiator Motoko. -

Do you have PeerGuardian up? I couldnt open GW for 2 days because I forgot I had it up (note: I expect this not to be your problem). — Skakid Rally- kupo!

it is more likely that my parents (mother specifically) tampered with our wireless router. --Readem 19:05, 9 February 2009 (EST)

lol. I forget where I saw that. --Readem

Well, I think it's because I'm so amazing ANet stopped giving me faction, therefore you must make up for this. And yea we could guest you, but you are very smelly and never log on at euro times! --Crowels[슴Mc슴]Mootles 22:31, 4 March 2009 (UTC)

OOOOH DO YOU WANT SOME SALT ON THAT BURN TO HELP CULL THE POSSIBLE INFECTION THAT COULD OCCUR BECAUSE OF THE EXPOSED FLESH? IT WOULD HURT MORE BUT AT THE SAME TIME IT WOULD BE QUITE BENEFICIAL FOR YOU. —ǥrɩɳsɧƴɖɩđđɭɘş

I had to uninstall. GWs is interfering with my homework. I'll be back when I have time. Peace out, niga. u hilarys. —ǥrɩɳsɧƴɖɩđđɭɘş

misery stop with the policies, they must discuss. :> ~ Big

Get better players for TA, your balanced team lost to hexway.

Saw your post on W/E Primal rage regarding Sentinals. "Now, I myself run Sent insigs. To me, a constant +20 is better than +30 health. However, unlike many of the members in rawr, I do believe in caster sets. Feel free to ask me any questions that you may have, as I associate with jatt, asp, and polly on a fairly regular basis. --Readem 22:52, 2 March 2009 (UTC)"

I have scanned the threads on the Rebel Rising forums and understand the concept, but as a PvP noob, was wandering in that build why do you not run Strength 12+1+1, axe 12+1, as Primal Rage, Body Blow, Bull's Strike and Rush are all Strength, and if you get weakness your Sentinals are still unaffected ?

Any further insight you can provide would be appreciated.

Because you would lose a lot of your damage potential. Warriors generate pressure merely by auto-attacking. With less investment into Axe Mastery, the less damage you do on a regular (non-str bonus) attack. Weakness is rarely a big deal, as warriors are cleaned so regularly (and thus sentinel's remain in effect). --Readem 03:37, 25 June 2009 (UTC)

Thanks for the reply makes sense, much appreciated.

IP is refering to the obs where readem used bull's strike on a knocked down target(more than once, too). Seriously, I would think that after so many times you would learn your lesson to not comment on what you don't understand.

It's impossible to tell sarcasm when pretty much every comment I have seen you make so far is as dumb as that. Just like the boy who cried wolf, nobody will believe the idiot who, obviously, behaved like an idiot so far would suddenly make a smart comment.

How in the world can someone making an epic roll to the side, avoiding a lethal blow from the opponent standing above one, not be a joke, when we're talking about a game I'd expect you to know enough about to be able to tell that such things can't happen? What now you understand everything I say wrong, and I have a hunch that you say that more for the sake of trolling than actually thinking about it. You could also not show up on a random talk page, make false accusations of something you clearly don't comprehend, and start thinking twice about the contexts of what you answer to, because it seems like you should start doing that. Fgt, see how the flaming started as soon as you arrived? ---Chaos- 12:38, 22 August 2009 (UTC)

...? WS is somewhat laughable in TA. It is far too easily shutdown to be considered viable (especially with corrupt back in the meta). As for BA, it is only effective (outside of GvG) in specific pressure builds. The foremost example being euro-balanced with a PR shield bash warrior. Your ranger also has mend touch, which is virtually useless while foul feast still exists. You also have no natty stride, and thus will never conceivably get AP up (thus ruining the whole point of your condi-pressure build lol). Armor of sanctity is mediocre on a monk in near every situation, and sadly return is still much better on a necro. AoS is better suited for midliners that only have offensive capabilities (like a bsurge or mesmer). Hope this clarifies my vote. --Readem 01:09, 24 August 2009 (UTC)

Hi m8, just wondering if you could tell me the build Hates was using when [nH] played a couple of weeks back, it was a Me/Mo, you guys were running Escapeway with Polly on VoR Me/Rt. (I think it was WoH?)Cheers.

I didn't say they owned it, I was asking a question, thanx 4 the advice, when RL doesn't get in the way I'll get back on obs

I am not really sure. We just fuck around mostly (I think that was run only 1 flag night). I think it was something like this though:

Thanx m8, I think that was it, I remember kitah's was there, bit late but how was your time in Cali? u were looking for a Uni ?

no, real life just interferes somewhat. I have a girlfriend now (which I am not going to fuck up over something like guild wars). also, this game is just boring now. --Readem 03:15, September 25, 2009 (UTC)

Talin Wauchope, would you like to be friends? —ǥrɩɳsɧƴɖɩđđɭɘş

If you're looking for an intelligent place to discuss endgame mechanics, QQ is probably a terrible place to do it =\--TahiriVeila 02:47, November 13, 2009 (UTC)

we gave nH away to some random euros who were already in the guild lol. you are probably referring to one of them. I sincerely doubt Hates By Snoo Snoo played monk for your CA team. --Readem 17:58, November 17, 2009 (UTC)

DUM NOBR I LOL'D IRL WHEN YOUR DEVA GOT DBLOW'D :> ---ChaosClause -

GeAr's monk dblow'd his Deva a few times, I lol'd so very very hard when I saw it. ---ChaosClause -

Makes sense? :> He missed a ton's of Bulls's, and I chuckled when he got Bulls'd seconds after missing his. ---ChaosClause -

Tbh Chaos you fucking suck so you can't really say anything. --Frosty

Why the fuck are you shitters posting on Readem's page again? —

Because it annoys him, and because he hasn't requested to have it protected yet. Oh, and obsing his Deva getting dblow'd by a monk. ---ChaosClause -

Chaos, you are woefully ignorant. I can't flail-lock myself against 4 water Elementalists on frozen. I will lose all mobility. Secondly, Gear had multiple copies of blurred vision. The mere fact that there was an opening in bala (and I was not blurred), definitely warrants an attempt to Dev (though ultimately unsuccessful). We did manage to however kill both knights and bodyguard. Hopefully we will do better next time. Sorry for losing to MoI spike on frozen and missing bulls; guess I'm just bad. --Readem 00:34, December 12, 2009 (UTC)

You didn't play bad at all, I just laughed in disbelief when I saw a monk interrupt your Deva. It warrants teasing you, though essentially unjust. It's not like I'd know to play better myself. Veil on the ranger was curious. ---ChaosClause -

Well, without any spike damage, I am the only target they have to follow ;s. The main purpose of running a hammer, is just to make sure flags get in, and push opposing flaggers when necessary. Unfortunately, they had about 5-6 times as many snares as we did, and subsequently perma-boosted. Snares are they key I guess. We brought veil so that our cripshot could push flags without getting collapsed on. As you can see, this plan somewhat backfired. --Readem 00:43, December 12, 2009 (UTC)

Deva + BA + MoI + 3 monks +... MB? They ran... Prage + 4 ele's, monks and a water trident Rt/E flagger, iirc.
Yeah, meh. Are people getting tired of this permameta and running weird crap, or something? I obs the weirdest shit, more so than usual. ---ChaosClause -

Retrieved from "https://pvx.fandom.com/wiki/User:Readem/Archive_2?oldid=1013907"
Community content is available under CC-BY-NC-SA 2.5 unless otherwise noted.