I am the leader of the "Kataklysmic Decapitation [Kvlt]" Guild. I started playing Guild Wars around two months after Prophecies came out.

This is my small, but growing guild. Flauros Dagon, Death Trivium, and I all live in Meadville, Pennsylvania. We are looking for more Kvlt members. Although everyone but emos are allowed, metalheads are preferred! 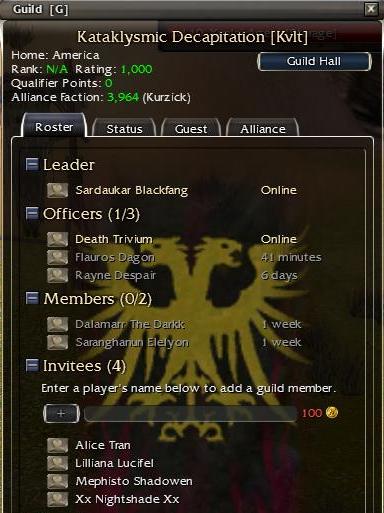 For my reference and your enjoyment if you watch them =P.

http://www.youtube.com/watch?v=bs-Q1-ylGgg Cast Down the Heretic - Nile parody of lyrics

Retrieved from "https://pvx.fandom.com/wiki/User:Sardaukar_Blackfang?oldid=767358"
Community content is available under CC-BY-NC-SA 2.5 unless otherwise noted.