Might I ask a favor? I need a bit of moderation on one of my build's talk pages. Someone went out of their way to attempt to insult me for everything from my lifestyle to my playing ability because he didn't like a skill I used in a build. Rather silly I know, but if you'd just pop over when you have a second. Thanks. Build:A/any Evasive Blades ~ J.Kougar

Three day ban over Grinch's warning... He has a history. Thanks for letting me know. -- Armond Warblade 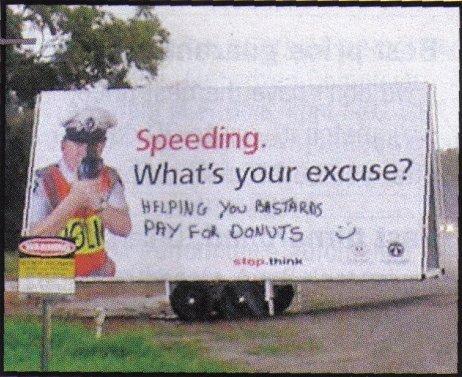 I didn't specifically do that, but I have done things very similar, but no pics. :( ~~ Napalm Flame ^_^

So everyone wants my babies? xP ~~ Napalm Flame ^_^

In your opinion. In my opinion, I have sysop lightning. -- Armond Warblade

Incarnate = LG, CG, LE, or CE. I pick LG. (That, and paladins pwn, even if they're massively underpowered.) -- Armond Warblade 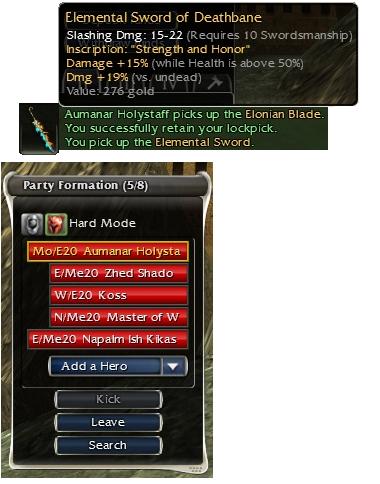 For anyone who reads this: It came with a "Show Me the Money!" inscription. Napalm was afraid he'd destroy the sword when he salvaged it off so he could put on the 15^50, or when he was going to salvage off the deathsbane so he could put on a fortitude (which he's buying from me. Yes, he's my slave.) -- Armond Warblade

Yeah, I didn't know you could put mods on without having to salvage the old ones off... O_o Thanks for telling me that earlier Armond, or I coulda lost it xP

...You stopped us farming so you could post that! -- Armond Warblade

Napalm is lame, he's not buying my +30 sword pommel. And he wanted to see my sin in elite canthan armor dyed black. How am I supposed to buy it now? XP -- Armond Warblade

so i heard you're farming UW. ;) got a couple builds you might want to try (both in HM.) builds are 55 necro.

1 SV + suffering will kill an aatxe. Nightmares are dealt with using the Benton trick, and the problem i'm having is fitting in reliable but also healing condition removal, for in case of skul crack. (suffering is a cover hex for smites) you can even kill obby behemoths and charged blacknesses.

i also have the SS version:

same idea as SV version, but not sure about behemoths and chargings. (also, i've been having trouble with smites lately, with their fleeing and fast as hell smite hex.)

To the magical pictures!

My question is, if you're a 55, why do you need Spirit Bond? Yes, it will always trigger when you're fighting an aatxe, but you really shouldn't need it as long as you're careful with pulls (no more than two or three aatxes at a time). So there's a slot open right there on both builds. Unfortunately, that also means we'll need both EB and BS for energy, since we'll be engaging small groups.
As for healing condition removal that's target self, Dismiss Condition and Mending Touch are what you want. They're both in prot, so they'll both overheal you when you use them. I'm tempted to go for Dismiss, since it has a faster recharge and the condition for healing is "while enchanted" not "for each condition removed", meaning you can use it in normal circumstances as well. (Don't remove Deep Wound, though! Since you're working off of health regen, it'll always help you.) The disadvantage is that it doesn't take care of cover conditions, but since your main concern is the graspings, who don't use cover conditions, that's not a problem.
Smites: There's no way that I know of to stop them from using Smite Hex short of energy denial or daze, and you have room for neither. I'd seriously suggest giving up on hexing them. Instead, try Feast of Corruption. Hit 'em with Suffering, and immediately follow up with FoC. My main concern is that FoC has a two second cast, possibly giving them a chance to smite all the sufferings first...
Another option is to go monk primary and bring Dark Aura and Cultist's Fervor. Dump some points into Divine Favor and go to town - for some reason, the favor bonus heals after the health loss.
Necro primary is difficult... X.x. That, and my necro isn't very close to being able to test any of these... I'll set him up for 55ing after I get my assassin his 15k armor (which should be by Wednesday by the latest). -- Armond Warblade

i likes the ideas, but a ton of them won't work. we're working in Hard Mode, remember. FoC will do nothing.... Smites'll outheal it and it makes them scatter. it wil take half a century to kill aatxes. not to mention hexing is pretty much your only option of taking down aatxes with nearly 2000 health and big, evil smites. the DPS of SS and SV i Hard Mode is unmatched. As far as Spirit Bond, it's there for when HB gets interrupted, which happens often thanks to aatxes. Not to mention a lot of times a biggish group of smites can easily outdamage Mending and Healing Breeze. as far as mending touch and dismiss, again, they won't work the way i need them to. the only reason i'd need condition removal is for the grasings' Dazed, and i'd need to remove it while under the effect of it. that would make them both 1.5 second cast times, and easily interruptible. Dazed isn't really a big problem anyway, if you do it right it works fine and you can survive dazed. also, as for smites, i'm not worried about their smite hex. that's what suffering is for. suffering, they smite it off, while smite is recharging, lay SS / SV, cover again with suffering. job done. as for cultist's + Dark aura, the AoE is ridiculous. they'll flee in half a second, and it'll take forever to take anything down. in short, these are the two most reliable builds for HM UW i know of right now that can clear aatxes, smites, grasps, behemoths, blacknesses, and if you're lucky, terrorwebs. thanks to secondary healing from spirit bond, they're also very safe. thanks for your time! 75.67.85.184 22:16, 1 September 2007 (CEST)

Oh, Dark Aura counts as AoE? Bugger. And so you know, I tend to stay away from UW HM... there's just too many complications. :P But thanks for giving me two new builds to try! -- Armond Warblade

yeah, HM UW is a whole different animal than NM. faster aatxes, interrupts on prot spirit if you don't draw them out correctly, and level 25 nightmares. not to mention faster smites and 1 sec cast Healing Springs. O.o however, with the low prices of ectos and shards (yes, a 55 necro can farm HM FoW too) i find the golds i get are making me the most money. ectos and shards just pay for the entrance fees.75.67.85.184 23:35, 1 September 2007 (CEST)

Your template, not mine. Oh, and I forgot one thing... -- Armond Warblade

Why are my minors poluting our recent changes?Dark0805(

...What? I don't see any thing of yours on recentchanges for the fourth... Maybe it's below the ~400 edits I could see, but I certainly didn't see any spam. -- Armond Warblade

I was using myself as an example, what i'm saying is why are minor edits showing up in the recent changes?Dark0805(

My guess would be that you didn't filter them out. There's a button at the top-ish of the recent changes page. I think you can also automatically do stuff like that from your preferences. -- Armond Warblade

Not a problem. Whatlinkshere has proven VERY useful to me in the past. :P -- Armond Warblade

My solution to all problems

You sound vaguely like my girlfriend... Trust me, it has crossed my mind. Multiple times. -- Armond Warblade

Depends on who you ask, how you ask, and what mood we're in when you ask. :P -- Armond Warblade

no u Auron's Obvious Sockpuppet

I should ban Auron's Obvious Sockpuppet for a couple trillion years, just so I can say I legally did that. Єяøהħ 03:43, 22 September 2007 (CEST)

Better hurry up then... -- Armond Warblade

I thought the solution to all problems involved this:

On the admin noticeboard, you struck out Signet of Illusions in the 'skills that don't scale' category. It sure as heck looks like it doesn't scale to me: <pvxbig> [build prof=Me/any name="BLARGH" illusion=10][Signet of Illusions][/build] </pvxbig> --

Zomg! I thought I struck it out as "things that are outdated". Thanks for letting me know. -- Armond Warblade

Taking turns at ~30mph is fail (it felt like it, at least...). Deciding halfway through that it's fail and trying to stop isn't. Trying to stop by running into a bunch of poles is fail. Deciding to not run into said poles isn't. Running into the little thingie that stops cars from pulling to far forward in a parking spot just kinda ended the whole discussion. -- Armond Warblade

IF YOU ARE MAKING A SPIKE BUILD

Amen, brother Armond. And that's coming from an atheist :P --

'A deity or god is a postulated preternatural or supernatural being, who is always of significant power, worshipped, thought holy, divine, or sacred, held in high regard, or respected by human beings.' Technically, if people worship the devil, then he would be considered a deity. Whether or not it counts as atheist would kind of depend on his interpretation. If by atheist he means that he doesn't believe in the Christian God, then I suppose it might work, though how someone could believe in the devil but not God is beyond me. But then, how anyone can truly believe in either of them is beyond me. --

I'm agnostic because I managed to mathematically prove to myself that it's possible for God to exist. :P --InternetLOL 04:41, 4 October 2007 (CEST)

To be fair, it is mathematically impossible to prove that something does not exist.

Deities have divine ranks. Celestials, archdevils, and demon lords do not have divine ranks. However, in some campaigns one might gain divine ranks through worship... though it'd probably have to be a relatively large number of worshipers, or Ensign could be a greater deity. :D -- Armond Warblade

Not celestial, sorry, the uber-celestials from the Book of Exalted Deeds. Forget what they're called atm. -- Armond Warblade

Yes! That was it! Awesomely done. :P There were three CG ones and something like 20 total LG and NG ones (13 and 7?) -- Armond Warblade

Pure luck. On another note, how did we go from spike builds to D&D? -- Armond Warblade

This relates how? The problem is with your voting on the extreme ends of the spectrum when builds aren't exactly perfect or absolute shit. -- Armond Warblade

Retrieved from "https://pvx.fandom.com/wiki/User_talk:Armond/archive10?oldid=269776"
Community content is available under CC-BY-NC-SA 2.5 unless otherwise noted.