And that's why PvX is bad

I used to like this site because it had many variated builds. Thanks do this lame WELL policy, this site only has unoriginal meta builds that everyone runs. Variation and Utility builds can't be found here anymore. Nytemyre 19:50, February 14, 2010 (UTC)

It's been a long standing tool on PvX. --Frosty

you do realize that these "unoriginal meta builds that everyone runs" are run because they kick the ass of all the shitty "Variation and Utility builds" that you seem to think are the coolest things ever, right? ··· Danny So Cute 20:09, 14 February 2010 (UTC)

also, you seem to be confusing the definition of utility (in the sense of GWs). utility is not mutually exclusive with unoriginal meta builds. — Maf so rational. 20:14, February 14, 2010 (UTC)
To be honest, PvX was created for that purpose exactly. I wouldn't really expect lots of variations since we only tend to store the optimum or meta builds (as opposed to a site like GW gamependium which stores every variation under the sun. Some may argue this makes PvX better since we're not keeping a load of mediocre variants. - AthrunFeya - 20:27, February 14, 2010 (UTC)

You should just stay guildless, like me. Or, you know, find me a guild as well :D Karate

Is it poop! Also, can I afk in it? I barely play anymore. Karate

Err, you moved the players to a different link and now theyre scheduled for deletion because they were moved?!

There's no reason a build would need two pages.

I moved it there when it still was called Jaxway because the TOC in jaxway was fucked up, forgot to move it when other shit moved it, i guess. Brandnew 08:03, February 19, 2010 (UTC)

Hmm is that page of players actually necessary? i mean half those builds are on pvx already and the other half aren't for a reason. The hero team build still functions fine without any specific player builds (those are just suggestions for decent bars but not inherently required as part of the build). Jax, I can move the Players page to your userspace if you want to keep a copy. I don't see it adding anything to the original build. - AthrunFeya - 11:20, February 19, 2010 (UTC)

Thanks! But you probably know the admin Bigx4...(something)! He has been having a big mouth at an awesome build Nore Bane Has Made. Please let him know we are not even done with it. It's still in bata and I totally agree I should be allowed to finish it. Nore Bane has officially left from the rejections that should not have been given to him! Please understand the surcumstances! Gods of Bane! OUT

The Conditions build Nore Bane made was not fairly voted out! Unfairly was the word! I saw his comments to other users on Nore Bane's builds! IT WAS CHEAP!!!

You'll be hugely disappointed, you'd get a better idea of our culture by visiting Poland or Pakistan. --Frosty

It's funny, the road from here to the centre of oxford is just a row of curry houses, halal meat takeaways and polski skleps - AthrunFeya - 23:12, February 19, 2010 (UTC)
I'd just like to point out that Edinburgh is full of Poles, too. And Glasgow is its own breed of angry skinheads. Practically anywhere else that can be considered a town is a minor tourist hole. C:\PvX>Abort, Retry, Panic?

I've ran out of chocolate. But anyway, please at least try and at least give new people a chance to not turn out retarded like the majority here/ - AthrunFeya - 22:42, February 19, 2010 (UTC)

tbh i let pretty much all of the new users go, this guy just starting acting like a faggot and hatin' on biggles so i decided to step in with my kind and hate-free please leave messages. Donte Rollins 22:47, February 19, 2010 (UTC)

ALL YOU NEED IS:

the answer was love.

Thanks! I'm actually quitting with Nore Bane! Too many negative and uncreative users! But at least there are some honest and respectable ones! Thanks for your efforts! You will be noted with our guildQ What is your Character name in GW.

what's rollback got to do with this? ~ PheNaxKian talk
Or you could just write proper WELL tags maybe? By proper I mean give reasoning sufficient so the author can see really obviously why their build is to be deleted. Comments along the line of "yeah this has been trashed a shitload of times" just invoke negative reactions. Why not even mention the reason it was trashed? Pretty much every PvE tag should have a link in to another build (unless it's something like a farmer for lvl 3 foes). I chose to revert when I had read the tag but became particularly annoyed when I saw who'd tagged it because only a few days ago I mentioned this and you've lectured others about it yourself yet still continued to tag terribly.
Also about time stamping: I will not be adding timestamps to WELL tags, admins should be able to tell when the time is right to delete a WELLed build, depending on the situation with the author and other users. To me, the whole three day rule just falsifies a process which should be arbitrary to any decent admin. - AthrunFeya - 19:16, February 21, 2010 (UTC)

Honestly, I'm not even going to try to read that. I'm too tired. I'm going to assume that you bitched at me for using poor reasoning on the WELL tag, which I understand and will avoid in the future. However, I'd like to suggest maybe catching me on MSN, IRC, or hell even on my talk page about this in the future rather than leaving dick notes on build pages. Although, this is just a suggestion and if you choose to disregard it, I'll live. Karate

Jesus 22:33, 21 February 2010
Oh, and adding timestamps to WELL tags is just polite to other admins who are reviewing the build. It helps us know if it's been a substantial amount of time since the conversation ended w/o forcing us to check the history. But again....feel free to disregard this. Karate

just WELL tag builds properly, that's all I wanted to say. You're meant to be a leading example for other users to copy. - AthrunFeya - 22:47, February 21, 2010 (UTC)
also you're making a huge deal out of nothing - the messages left were really quite far from terrible. bitching at me about it won't really achieve anything. - AthrunFeya - 23:04, February 21, 2010 (UTC)

Obviously, I'm not making the point, so I'll let it alone. However, please remember that you can't remove non-NPA messages according to PW:ARCHIVE. Karate

You guys are so cute. Karate

I thought you were bi? Karate

looking for 1 caster for deep

And my lectures start at 4pm everyday =/ - AthrunFeya

wut? brandnew speak english? "pm" times are times after midday/noon and before midnight. and college is so good in that way. I would pretty much have the same situation, but boss put me on opening times mon-thurs so i still have to wake up at 7am :<. I would join your deep group, but i didn't take my laptop to school today. i also have never done deep, but i am sure you could draw on the map and tell me where to go. — Maf so rational. 00:39, February 24, 2010 (UTC)

Oh. I just assumed it was something with près midi and après midi. But after thinking a bit more it's probably something with px median and ax median. ^_^ --Brandnew 00:43, February 24, 2010 (UTC)

Matin et après midi are the french words you're looking for for morning/afternoon--TahiriVeila 01:41, February 24, 2010 (UTC) 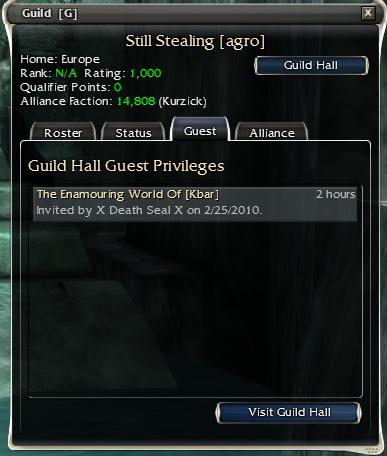 first, are you positive it's today (i know they said they expect it to be today, that doesn't neccassarily mean something's cropped up). Secondly: the site notice is beyond pointless, we've done fine with other updates, unless I'm not getting the point of the site notice? ~ PheNaxKian talk 16:41, February 25, 2010 (UTC)

Oh, we don't have to do it, I was just going to say something along the lines of "remember the naming policy, style guide, wait for the live update, etc, etc." And from everything I've heard, it's today. Karate

well we've managed fine with past updates so I don't see a great need for such a site notice. All I've heard was that ANet /expect/ to have it live today (from ANet), I just thought you might have heard something more concrete is all =p. ~ PheNaxKian talk 16:48, February 25, 2010 (UTC)

The TK people I know have said it's today, but they probably don't know any better than anyone else. And I'll forget the sitenotice. I just thought that it's been a while and couldn't hurt to remind some people :D Karate

- 17:17, February 25, 2010 (UTC)
Also I'm not really worried about the incoming builds. I'm worried about the shitstorm of archiving that is on its way (pretty much every build in Guide:Dungeon Overview if they've done things properly) - AthrunFeya

Lau's thoughts on the update:

From a PvE point of view:

In summary, they seem to have pointed us towards a new phys/clusterfuck meta (cuz we all miss ursan so dearly). Except everyone needs to dust their warriors off and farm max deldrimor rank this time (instead of norn). Also, any guess at what ecto price is going to be this time next week? - AthrunFeya

i'm actually betting ecto goes up. most people aren't going to be good enough to use the new warrior builds in a group. as for the rit hexes, i got on to try them out in RA - snaring the entire team with Painful Bond for 8 seconds is pretty fucking cute. ··· Danny So Cute 04:25, 26 February 2010 (UTC)

ah, i didn't make it clear but I thought ectos would still continue to go up. (I said ~15k by next week) - AthrunFeya

tbh, letting 4 people take turns to knocklock mobs is always something i've wanted to see in action. people sort of did it in ursan, but they had no reason to not just spam the fuck out of all their skills. at least the adrenaline loss means people will have to try to coordinate in their phys clusterfucks. — Maf so rational. 04:48, February 26, 2010 (UTC)

I dont know if this is the right place to ask, but since youre OP admin and all. Can you delete the page: http://pvx.wikia.com/wiki/HA_Swordsway Because i named it wrong (Should be Build:Team - HA_Swordsway), or can the whole build be moved to this page? Because i want to get it vetted by the PvX community. Another question, if i name the build correctly will it show up in http://pvx.wikia.com/wiki/Category:Untested_trial_HA_builds ? Thanks for reading this :P--GWPirate 21:08, February 27, 2010 (UTC)

I was accounting for the end effect. Your frontliners will be healed but your back/midline won't. Under heavy pressure, monk henchies do very badly, especially in areas where they suck like pretty much everywhere in Kaineng. The damage isn't lacking, the defense is. -- Star

oh yeah, tired. Well, I run those builds regularly with just the two monk hench and have never had a noticeable problem (and, to make it better, most of the hench bars have been updated so they're much better than before [take Chiyo's build for an example]). There are sufficient prots and heals to allow your phys character to death's charge in and club things - in my experience the mid/backline is hardly targetted because you've got juicy low level, low armor minions running around. I'm slightly worried if, in general, you struggle to do vanqs around kaineng without 3 healers. - AthrunFeya

oh hawt, you finally got to the stage I've been at for a year or so now :p - AthrunFeya

Hmm, i did vanqs a very long time ago using two SFs and a MM :p with SS and some interrupts on my character. Oh, and hench builds were even more pro then. - AthrunFeya

Retrieved from "https://pvx.fandom.com/wiki/User_talk:Athrun_Feya/Archive_7?oldid=1038977"
Community content is available under CC-BY-NC-SA 2.5 unless otherwise noted.