Not In Favor Of

Keep it in the user space imo. Then you're golden. -

If this ever occurs, I think GCard should lead, with admins as officers. Support, easy place to test builds... easy to find open minded people willing to try something crazy. --

Interpretation of that can go either way. Right now, if it's an official guild, I'm pretty sure that it would be allowed. I'm not saying that the guild will have announcements and stuff on here, though we could just put it in a userspace. That way we don't have to interpret that policy. It just says that it won't house articles on guilds. This wouldn't necessarily have to be it's own page or anything, just a group of the users and admins here who made a guild for this site. Bluemilkman 07:38, 14 July 2007 (CEST)

I like the idea, even though I'll personally stay in my guild for now. I don't think it has to be an official PvX project run by 'the community'. It can be just a bunch of PvX users who get together to form a guild. Or there could be even more than one of these. However, if PvX is part of the name or shortcut, some description should be available here so people can see what it is and what it's not. I'd suggest to put that in the user space of whoever takes care of the guild, doesn't need to be an admin imo. A link should be made e.g. from Community Portal, and the name of the page should make it easy to search for it. – HHHIPPO ‹sysop› 17:56, 14 July 2007 (CEST)

It's Impossible to find good Luxon guilds, which is, annoyingly, my title track. I'm not the best of gw players, and I'm proud of my current track, even though it's mostly incomplete... Anyways, I feel neutral on the idea of a PvX guild, cause I really don't know how much help I would be. Especially since I only have 1 level 20 character (an assasin) and nothing else near that. ‽-(єяøηħ) no u 18:02, 14 July 2007 (CEST)

I like going alone sometimes too. I think we should just be a guild for any type of gameplay, as in helping people through the game, and Vanquishing, even HAing and GvGing for the purpose of winning. But if there would be a new build to test, we would try that... I think I'm just blabbering. ~~

That still doesn't fix my luxon problem, I think I may have to find a Luxon guild of my own. : ( Unless it's possible to Luxon faction farm and raise the title without being in a Luxon guild and someone / some of you are willing to join me on that which includes dealing with my rather spastic schedule. ‽-(єяøηħ) no u 18:38, 14 July 2007 (CEST)

It's possible... Now that you can just get Jade/Scrolls for the faction, and still get the title, that is possible. Idk how to FFF luxon though. ~~

Yeah, Auron is doing Fury and GvG atm; I am joining an HA guild once I finish moving; and DE is going to make his own guild most likely (With people he knew from when he was in QQ) Readem (talk*pvxcontribs) 19:08, 14 July 2007 (CEST)`

Problem, lots of people already have guilds that they don't want to leave (like myself...) and don't have second accounts, etc. to join this guild with. -- Armond Warblade

Yea, I noticed that too. We don't have to have everyone in it, just whoever wants to be in it. I knew when I thought of this not everyone would want to be in it. I was just trying to see who would be interested and who thought it was a stupid idea. Bluemilkman 20:11, 18 July 2007 (CEST)

If we needed more people to test stuff with, just make you guys guests when we need em. I mean, My alliance [Sins] just fell apart, so... ~~

Yea, my guild is falling apart, down from 60 active members to 18. So I'm about ready to start this, as long as I don't get any complaints. The only thing I need is a name. PvX Builds? Or something other than that. I also am looking for donations for the guild hall. I'm not the richest player in the world, and when I say that, I mean it'll take a couple days for me to make that. Anywho, I'm getting on tonight to do it. Bluemilkman 20:16, 18 July 2007 (CEST)

Call it PvXBuilds.com, with the little tag thing being PvX. That's what I think would be best. Want me to go ahead and make a template, User:Frvwfr2/Template:PvXGuild? I'll have like a "To join, talk to ____", you probably... It showing you IGN of course. ~~

Yea, that's what I was thinking for the name. My IGN is Blue Milkman, if you want to make a template. Advertising is going to suck though, since I'm pretty sure gcardinal won't let us use the main page. I guess if people go to the community portal, that will work. I'll make a guild page for it in my userspace, and just have everything refer to there. I'll make sure gcardinal is cool with that. Bluemilkman 20:32, 18 July 2007 (CEST)

There ya go, template and category is all set up. Template is here, category is at Category:User:Frvwfr2/PvX Guild. Can't link that, it'll include this page. ~~

Good enough? Im not too good at color choosing, so change if you wish. --

When we get a webstie, we will need to link there, and choose a fcation. --

tried, but never worked out. --

Yeah, it was attempted, but never got created... --

It was created? They shoulda made it better known... --

For the past few weeks, I've been mostly PvEing in my own one-man guild, bringing my toons up to PvP standards. I've still got a little ways to go. Reason I brought this up is that I can do all that on my own, or join a PvE guild to do it in. If you guys wanted, I can donate my guild/hall/NPCs to your PvX guild. It's nothing glamorous, but it would be free. Imperial Isle, Kurzick-aligned (to take advantage of the special weekend), Xunlai, Priest of Balth. Name = Team Zomgwtfpwndbbqkthnxbye [leet]. Talk it over and let me know. I'll just be deleting it once I get back into heavier PvP (as in, more than guesting and occasional other PvP venues). -

Invite you all to the guild, then turn one of you into the leader. -

Not the absolute most official guild name, but we could use it as sort of a home base to start off as... -- Armond Warblade 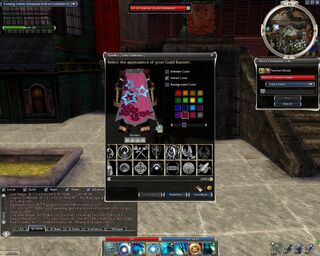 Only nubs use Guardian. -

I wouldn't suggest bringing Guardian, when you already have Aegis, over PS, SB or SoA. -

Well, sure, for PvP, nothing beats Protective Spirit or Spirit Bond but for PvE... Also, Aegis rocks. Takes alot of pressure off the team in general. —ǥȓɩηɔɧ〚₮/ḉ〛 15:16, 26 July 2007 (CEST)

And would you rather me use one of these that I've seen grouping with PUGs in PvE? At least we can all agree that my build is better than what alot of people use. —ǥȓɩηɔɧ〚₮/ḉ〛 15:23, 26 July 2007 (CEST)

Just teasing you m8. I wasn't trying to be insulting or anything. -

If I couldn't take a little heat, what kind of man would I be? Certainly not manly enough to wear that pink cape with red flowers and baby blue stars... —ǥȓɩηɔɧ〚₮/ḉ〛 19:46, 26 July 2007 (CEST)

Left for a few hours

Well, they need me for GvG. As long as everyone uses the alliance chat it'll be like guildchat. That's how it functions now anyway. —ǥȓɩηɔɧ〚₮/ḉ〛 00:15, 31 July 2007 (CEST)

Let it die. what a rediculous guild. I cant believe i got kicked for not wanting to wait 2 and a half hours for an unorganized gvg. glad i left my old guild for this crap.--Coloneh 08:05, 21 August 2007 (CEST)

My Status As Leader

Well, if I had it my way, I wouldn't be writing this. My parents have come up with the brilliant conclusion that I would do better in school if I don't play computer games. First of all, it's hard to get better grades than A's, and second, that's just stupid. So they decided to delete it off of my computer. If I could get on to make someone else leader, I would. I wanted this guild to work, and had some support. I hope it will work, but right now, I can't do it. When I am able, I will get back on and fix this problem. I know not a lot of recruiting was going on, which again, was my fault. Sorry to those who wanted this to work, I just can't do anything about it right now. If you'd like, you can keep it going, but I wouldn't be surprised/angry, if you guys wanted to go to other guilds for now, since it might be a long time before I can get back on. Sorry. Bluemilkman 20:27, 8 August 2007 (CEST)

This is true... Kind of bad timing for creation, with Halo 3 the next week, and The Orange Box right after that... hehe. ~~

Retrieved from "https://pvx.fandom.com/wiki/User_talk:Bluemilkman/Pvxguild?oldid=283911"
Community content is available under CC-BY-NC-SA 2.5 unless otherwise noted.