Welcome to the wiki first of all. Don't feel bad when ppl trash your builds etc, always happen to the first builds you post (and ppl are generally asses here :3 don't worry, soon you'll be one too). Second, might want to read this when asking ppl to test your build ^^. Last of all, sorry to disappoint you but your nickname has to reflect your username as per PvX:SIGN, which is currently does not :< Anyway, have fun —şąɀɀƴƿooɧ

First, thanks.. Yeh, but people deserve/should expect getting flamed if they volunteer for putting builds and stuff up in public places. --Chaos Messenger 15:01, 20 August 2008 (EDT)

All in time. --—Chaos Messenger

Anything for you, honey. -.-' —Chaos Messenger

Its icon must be exclusive for the signature as per PvX:SIGN. Please reupload it under a different name and use that one. ~ ĐONT*SYSOP 08:09, 23 December 2008 (EST)

Check out my build, Goodnight L A

I don't know about GvG builds, and I would've appreciated a link. --—Santa's Messenger

That was a link, silly Goodnight L A

This, gentlemen, is starting to be a pain in the ass. --—Santa's Messenger

Testing because this acted weird a moment ago. ---Chaos-

added a redirect to it --

from Build:Mo/Me Solo Cap, this is unique and unposted build and deals massive dmg + u hel with evry cast i use this build daily and it is inferior to no monk builds Pitbull23701 21:12, 4 January 2009 (EST)

Not even going to consider before you actually give a link of it. I don't know if it got removed this fast, because I couldn't get to it by typing "Build:Mo/Me Solo Cap" and by pressing Go. The other build is just better. ---Chaos-

or then we can just gank a target with the OP Palm Strike and make it need a res instead of a heal. The healing redux cap is at 40%, so LC is enough. The 2nd bar is better, and you need an IAS. You need to change you vote. I switched the second build for it. Also, we have several A/N builds vetted that have no IAS. Trust me when I say that -40% healing benefit + DW is pretty sick. I know PS is OP, but I'm betting it will get nerfed in the next update and this build really isn't a 1-1-0 is it? Karate Jesus 13:37, 5 January 2009 (EST)

I deem you worthy to race me. What's your fastest character? If possible, a D/A vs. D/A race would be nice. Idk when I'll be on but just add me as Eighth Octavarium.

I run on Ranger and Warrior, but I dislike Dervs over anything :> Ranger v Ranger or War v War? I might be able to get my Derv runnable after loads of effort, but I'd never use it ^^ ---Chaos-

Yeah dervs fail. I don't have a ranger or warrrior. I used to have a warrior but I wiped my account about six months ago. All I have left is my monk.

Ugh, then it won't really work. D/A's spamming Dash and Pious are too fast for fair competition. ---Chaos-

How about Mo/A versus R/A? Death's Charge and Dark Prison as the legal steps and any other title skills.

Energy Advantage? Nah I run with 35 energy. I kind of hate running nowadays so I was never pressed to make an armor set just for running.

Expertise? I'm just assuming you run with Zojun's and Dodge. But stances are less than half your build I'm sure. Lol

Expertise only affects Ranger Skills. Rank skills etc are unaffected and I run with quite little energy. ---Chaos-

Expertise affects all Ranger skills, Binding Rituals, Touch skills and physical attacks. Your stances give you a better boost if that helps. Mine is pretty much constant 25%.

But not Dash :P which you will be spamming. R/D is better in all ways ;P ---Chaos-

I don't even come close to spamming it. I start off with it then use Dark Escape for 26 seconds...then start with Dash again.

Orite, rounding. My runners are r1/r0 norn and have no other ranks. I play PvE on my nec. ---Chaos-

Orite, some people don't need to bring hero monks, but then again, you can't troll wiki and play at the same like me. ---Chaos-

do u just spam coward on charge or do u actually coordinate it? :/ InfestedHydralisk

I'd prefer being able to spam it, but I can't get everything. Upped vote to acceptable. ---Chaos-

Try one of these 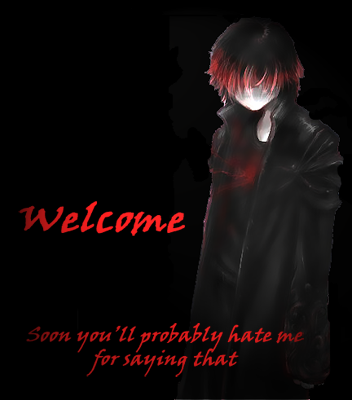 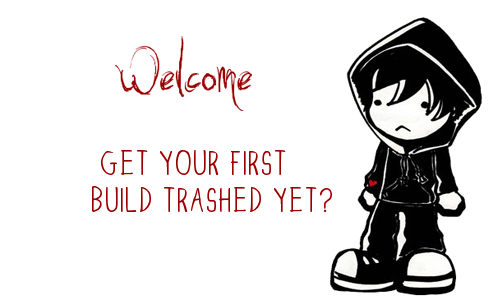 Eh, I'm not into emo stuff, so I don't know if you'll like them or not. Let me know if you want me to change the wording.

<3 Life is fun. The pics are fine but the texts give a bad impression of me :3 "Welcome" as normal and "Got your first build trashed yet?" as a text to the 2nd pic, I love the impression on his face. The 1st is overly done and can be well used if followed/preceded by the right text. ---Chaos-

btw I'll go sleep but thanks in advantage. ---Chaos-

for the hints you pass on to me all the time ;) I Predict A Riot eeek!

np. still needs a redirect. gonna try do it for you :o ---Chaos-

is pretty fucking long in the edit window, could you just remove the link to your contribs? It's not like anyone ever checks or cares about that stuff. - 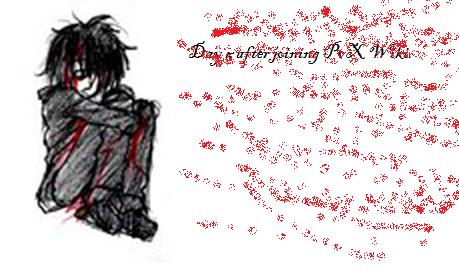 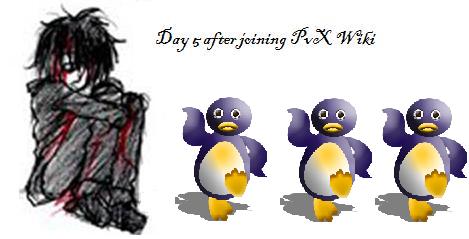 This letter is to address the issue of leg humping which has been occuring recently.
Where as at one time it was mildly amusing, may I even dare to say...cute,
now it has become a burden to my daily amusement while trolling pvx.
I have the highest regards for your attempted trolling of me, because
I myself enjoy a good trolling; however, I would appreciate this phase
of penis-jockying to come to an end.

It doesn't matter that it ends with Bstrike, as what you do as a good warrior is enter Frenzy as soon as you Bstrike and spikespikespike ;o Ricky

Monks rarely Sbash Bstrike tbh, and when they do you get your spear (in case there's nobody in your vincity) and charge your adrenaline while in frenzy, so it takes like 3 seconds to get Brage back up. Ricky

I appreciate your rating but would like to point out that in the effectiveness department, this build is designed to keep more then one miner alive and not jsut one. By keeping all the miners alive you are able to keep a strong offence on a mine which in tern allows it to defend itself better whiel you provide healing and interupts of AOE and nukes when they are needed. I please ask that you revise your rating. -- Zealous010 09:24, 9 February 2009 (EST)

It takes time to learn to accept votes as they are unless they're completely retarded or make untrue statements, in which case a bm tends to know to remove them. ---Chaos- 09:39, 10 February 2009 (EST)

i know that not all votes count, i however find that it is very fustrating to find out how poeple rate builds, and then have a flawed way used in a rating. If you say that you didn't even test the build let alone not paly the game, your vote should be removed. NOt yours personally but you knwo what i mean. -- Zealous010 09:59, 9 February 2009 (EST)

people rarely test out builds before they vote. pvx would be swarmed by builds that never get into a category because people would need to do so much testing. ---Chaos- 10:05, 10 February 2009 (EST)

HAVE YOU EVER HEARD OF SHAMPOO OR DEODORANT, I PROMISE YOU, ITS WOULD DO THE SAME MIRACLE TO YOU AS AIDS WOULD. Fishels[슴Mc슴]Mootles 15:56, 13 February 2009 (EST)

Retrieved from "https://pvx.fandom.com/wiki/User_talk:Dandybot/Archive_1?oldid=825021"
Community content is available under CC-BY-NC-SA 2.5 unless otherwise noted.