na bro its cos the stuffs in pve is like reel strong and we need shit to like stop them doing shit like i think sway wud be gud idee but also mebbe taking pblock and mebbe some other shutdown bars would make it like reel stronger and shit--Oskar 13:26, June 25, 2010 (UTC)

Yo shitters, necrits are fucking strong in pve so thats no problem bout the heals. NR and Tranq are good protection--GWPirate 10:33, June 26, 2010 (UTC)

Being able to use Enchantments is pretty cool though. ToraenTheJanitor

A question I have, my sexually liberal pal

How do I make a welcome picture like that quiant little one of yours? Vincent Evan [Air Henchman]

I'm guessing you want me to refer to him? Well thank you then, Dandy! ^____^ Vincent Evan [Air Henchman]

I've been heads against with Brandnew quite often lately

During the last... 6 months? We haven't really interacted beyond revert warring and minor bitching to eachother about very trivial shit. It's been annoying :p but I'm not saying that you've done anything retarded. You've always been on to valid points and good causes, which is why I decided to ignore my meaningless annoyance and RfA you anyways! <3 ^_____^ ---Chaos- (moo!) -- 20:21, June 29, 2010 (UTC)
I think by "heads against" he meant that your penises have been touching quite a bit lately. Karate 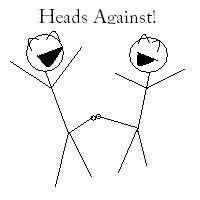 Well, that's all I can picture. Karate

Wait. Fuck. Literally too. That pic gives me epic and long chuckles. boners fixed ---Chaos- (moo!) -- 20:37, June 29, 2010 (UTC)
(EC ×2)Have you ever seen the picture of a dick with a dick pissing dicks (or w/e)? Apparently, soft core dicks made in paint have a precedent of being approved/hilarious here. Karate

Apart from the conversation we are having on msn as i type this, our msn conversations seemed to have declined in frequency. Msn more :<--Oskar 22:08, July 4, 2010 (UTC)

Dwarf Fortress. The epicness can be seen here and here. STRIKE THE EARTH! C:\PvX>Abort, Retry, Panic?

If you want to stress test then torrent Crysis. If you want something worth playing then get DF. C:\PvX>Abort, Retry, Panic?

Retrieved from "https://pvx.fandom.com/wiki/User_talk:Dandybot/Archive_20?oldid=1094793"
Community content is available under CC-BY-NC-SA 2.5 unless otherwise noted.