You're a dumbass. Karate

I presume you all haven't even tried the build. Its used in a total different way. Me/E spreads condition and its dmg is less. For the E/Me build your sticking a target and shuting them down through KD. As for the WELL...It's not one...the Ele Stoning spam build is different in the fact that it focuses more on blind. *Melee*

Links are nice, but since i put a well tag on this build ill assume that's what you're on about.
Ok first off, if you ever want anyone to take you seriously, stop this shit of "try it before you talk about it". Someone can quote Bob Freg. for you. I don't need to try a build to judge it, im a good player who can look at skills and understood how they are played.
Secondly, your build is the exact same as our me/e, with the elite taken out for an optional. I have no idea why you're on like "oh this is completely different usage, its a totally new build, when its an identical build, with two skills taken out for optionals.
Third, yours has absolute shit energy. The point of the build is to abuse low-recharge skills to pump out weakness, knockdowns, and blind. Yours can't do so consistently because in about 30 seconds its going to be on zero blue bar. Lyssa's aura fixes this problem.
Fourth, your build relies on chaining skills to keep someone incapacitated. Whats the number one problem with chaining skills? It makes the bar interrupt-prone. How do you get around this? Fast Casting! The mesmer is at much less risk of a dchop owning its face.
Fifth, why is a build that has blind and weakness supposed to be "caster hate". If you want caster hate, jump on a fucking mesmer or ranger, don't try and knocklock the person when that's completely inferior to simply interrupting them.
Enjoy. —The preceding unsigned comment was added by Gringo (talk • contribs) (UTC). 05:43, January 25, 2010 (UTC)

True, but that build clearly stated it's sole purpose was spreading a (covered) blind. In this it gets outshined by blinding surge, which can still do other shit like deal some damage or be a massive general nigger. Therefor i believe the well tag was justified. Brandnew 09:34, January 30, 2010 (UTC)

Saint so Mother(board)less! Don't forget to download the beta my good friend, lots of love. --Frosty

GO DIE IN A FIRE ur still in team builder.

Just establishing the current status quo so you can come up with new random bullshit. The old stuff is kind of obviously wrong now!--TahiriVeila 03:16, February 7, 2010 (UTC)

lool, first off, running Bsurge in 9pm AT is the definition of benched. Sitting on shield set with no one on you, casting attunement with ranger next to you, and sitting on 4040 with a warrior running at you is the definition of bad. Third, you were the one that said vR can't 8v8, i simply agreed. keep this bullshit off my talk page, you horrible horrible player. k, PAL? Gringo 03:19, February 7, 2010 (UTC)

Hey pal, who's playing? Don't see you getting guested anywhere? And QQ about weapon sets, like everyone is perfect on EVERY cast--TahiriVeila 03:24, February 7, 2010 (UTC)

i am playing actually, you just dont know who for. even as i write this i know defending myself to you is stupidity, but i'll humor you. and no, no one is perfection, but swapping sets more then once every 8 minutes isn't very hard, especially when no one is on you and you never ever get off your shield set (mind you, until warriors run at you, then it seems you find the time to switch to your 4040!). come back when you get good, im formally requesting you stop posting on my talk (iirc, im allowed to request that, many people did with Relyk, and you two have a lot in common). cherio PAL. Gringo 03:31, February 7, 2010 (UTC)

good for the game skills

Bawww when you loaded up my message would have made you ":>" --Frosty

LoD mes were pretty bad unless running triple war to begin with, much better off with bsurge or pblock still--TahiriVeila 03:07, February 26, 2010 (UTC)

ask someone for it, lots have it

remember you was talking about a glyph sac meteor shower ele at VoD? http://www.gw-memorial.net/nav/b_pase_i.php?id=82 That's the match. --Frosty

ye cuz we had friends over and went on chat roulette for a bit, and she saw so many penises that you were the least of her worries. Gringo 23:37, March 7, 2010 (UTC) 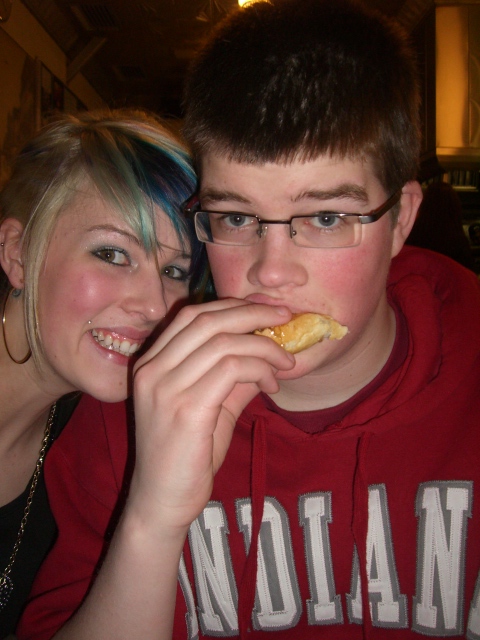 I was considering insulting you, but instead, I have chosen to give words of encouragement. Eat that donut good --Readem 21:53, March 11, 2010 (UTC)

Readem, that looks more like a pasty to me! Get stuck in Saint! --Frosty

Since I turned off tb, Dupsway!

request for reconfirmation. Basicaly users can add their name to the bottom of an admins RfA and if enough people do so (determined by the net result of last RfA and time passed since then) an RfR is started, which just means the admin goes through another RfA (where upon succeeding means they retain their sysop rights, and failing means they lose them). So their means of evaluating admins I guess. ~ PheNaxKian talk 00:38, April 15, 2010 (UTC)
Request for Reconfirmation. Basically it's intended to be a new RfA if someone has a complaint with an admin after they've been in their position for a loong period (something like 6+ months i think) but it's really just an excuse to stir up drama.--TahiriVeila 00:40, April 15, 2010 (UTC)

not a bad idea, seems a bit flawed in that retarded users votes count for the same amount as smart users votes tho. Gringo 00:43, April 15, 2010 (UTC)

here we find the primary flaw in the electoral process of the United States of America.--TahiriVeila 01:06, April 15, 2010 (UTC)

I'm convinced that in real life politics, 99% of the people just vote on intuition, meaning the best looking candidates win. There's even some researches which indicate this ;o Well, what I can tell about the presidential election, people knew somewhat well what both Obama and McCain were on about. --Chaos? -- 09:38, April 15, 2010 (UTC)

not to get sucked into the time wasting vortex of social media (cuz pvx isnt a timewaste ikno), but i needed an account to view anything on the site so i made one. Gringo 02:49, April 16, 2010 (UTC)

Hawt or Not. --Frosty

It's a mixture. It's like Nawt Sure If Want.... Karate

I meant his picture is on Hawt or Not. --Frosty

Well, I linked a site, but I think you have to link off-site to dl any bots. And, as I said, Anet has plans to do something. So, you would probably be shooting yourself in the foot. Karate

Nope. But you can't get any bots directly from that site anyway. It's mostly source code, which doesn't help someone who doesn't know what they're doing. Karate

regarding "might get bad" - you don't have any idea how bad it might get very, very soon. imagine a world where every time you went to spike, the target was SB'd, and every time a warrior got within melee range of a target and hit frenzy, that target got guardian'd. and where blind lasts 3/4 of a second. ··· Danny So Cute 06:28, 6 May 2010 (UTC)

no one runs it, but i thought escape ended on all attack not melee, so i archived. it deserves an archive regardless but who rly cares. Gringo 02:50, May 8, 2010 (UTC)

whats your IGN? ive played for so long and somehow have never come across you ingame i dont think. except for like a year ago in RA but that doesn't count --Angelus 22:41, May 13, 2010 (UTC)

are you in that byob guild that plays on uncharted? if so i play you fairly often, i always see an angelus over there. my name normally contains Saint (there are 3 other plays that gvg with the name tho), and my para is daniel tammet. Gringo 22:52, May 13, 2010 (UTC)

Okay. So. 1 week before, anet insanely buffs mesmers completely changing the week. 2 days before they ban like 50% of the top 100. 1 day before they nerf the OP mesmers. Anybody else think this is going to be the most chaotic mat in the history of gilwor? And maybe the meta might actually be good now.. balanced shit might actually see some use! --Steamy..x 09:06, May 28, 2010 (UTC)

Point was that botting wrecked the player base....it stopped good players from playing (cause they can't match bot speed) thus reducing the quality of play making it easy to make top 100. Damage was done and trying to get the good players back to playing will be the next task (if possible). However you are right there are some in the top 100 that didn't bot....but they haven't gone against the best either---XTREME 11:13, May 28, 2010 (UTC)

It wasn't like a majority of top 100 players botted, although there were quite a few. But like Crow said, most just tried it since nobody thought they could get banned, and then stopped. --Frosty

(Reset indent) maybe like 5% of the gvg community was even affected by this. if you take out guilds like GWCA/GaGa, then most guilds had between 0-2 ppl banned, out of 8-14. it does suck that mesmers were nerfed the day before the mAT, we hadn't practiced bala like most ppl did before the mesmer buff. Gringo 16:26, May 28, 2010 (UTC)

Yeah i know we piss each other off. Phen's looking for people for his meta caretakers thing. Besides lemming, crow, and maybe me, you're the only one on pvx who's even remotely close to qualified for the position. Interested?--TahiriVeila 05:07, August 4, 2010 (UTC)

So did you have a question you wanted to ask, or was that just you making an ass out of yourself again? Daññy

"I think you're mistakenly assuming that the trolls aren't the ones that ruined PvX. If the trolls did anything, they kept it to a certain level of quality. Our admins never had the basis or testicles to ban people who just kept crying about their builds. They still don't. (No offense to you admins, but the Physway thing is all the proof I feel I need to say that.) If you want PvX to have greater quality - which it certainly needs and which it has the potential for - you need to encourage users but also maintain that admins reserve the right to tell anyone to fuck off at any given time for any reason. And you needs admins that don't feel like dealing with drama - unless it's with a banstick. Daññy 22:46, August 15, 2010 (UTC) "
"i don't see how you justify logic like this. i think you're saying trolls helped because they would rid the site of users who got butthurt over builds. who cares about users who get butthurt over builds? rather have them around then have idiot trolls like you and thunda around. Gringo 23:59, August 15, 2010 (UTC) "
sorry, but that doesn't sound anything like "how do you get logic like that etc.?" also, what good users have ever been on pvx? Daññy 03:23, August 17, 2010 (UTC)

my statement starts with "i dont see how you justify logic like this", and you end with "how does this sound anything like "how do you get logic like that etc."" are you dumb or blind. Gringo 04:37, August 17, 2010 (UTC)

The logic behind PvX being functional only by trolling the majority of people off the site is arguable to the least, which he pointed out. After that it really just comes down to deliberate misinterpretation of his words, then justifying that with twisted logic ^___^ What the fuck, it's Saint, he doesn't always bother putting himself properly. You get his point, if you don't, then, I just explained it, so please address that instead of his semantics (if it's wrong to use "semantics" in this context then please laugh at the irony and correct me) :> ---Chaos- (moo!) -- 17:58, August 17, 2010 (UTC)

I'd really rather not. If he was capable of having an intelligent conversation even once, I'd feel differently. But as it stands, it's not worth my time to do anything besides insult him for any possible reason. Daññy 18:48, August 17, 2010 (UTC)

Retrieved from "https://pvx.fandom.com/wiki/User_talk:Gringo?oldid=1140731"
Community content is available under CC-BY-NC-SA 2.5 unless otherwise noted.