you know, 3rd really is more of an accomplishment... and wow, 10 archives.. sure beats my one with hardly any talk on it--

File:Panic Amerikip.jpg My Mudkip pwns ur Mudkip by breaking down walls and building strategic 1 megaton missles instead of OMGWTF 100 megaton warheads. --- 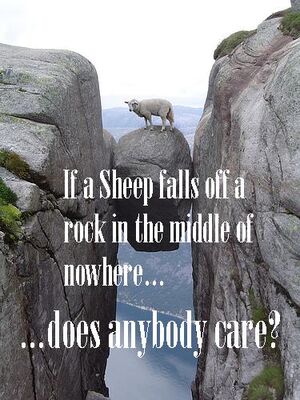 well as long were posting pictures...--

That sheep is communist, so nobody cares. Because COMMUNISM IS BAD!!!! ---

So i herd u liek mudkip

that pikachoo is more communist than my sheep, and btw, u better change ur sig pic border, commie--

300pxCan Someone help me? I can't tell which is the real Mudkip!

Except for America breaking down ur "Berlin Wall." ---

It was in dialect, so babelfish won't work. –Ichigo724

Simply put: the Nazis took an ancient symbol of peace and transformed into the most feared symbol of the 20th century. Dragnmn talk cont 10:11, 1 June 2008 (EDT)

Actually, the Nazi's took it from the Romans, not the Indians. And in Rome it meant nothing aside from cool tile pattern on floor, as far as I know. ---

Nazi's dont exist anymore, and no. I just did a thesis paper on fascism in 9th grade. ---

Strange, I was in Rome a couple months ago and saw 1700 year old floor tiles in the swasticka pattern... O well. ---

Probably, but Hitler stole it from the buddhists. The effect has been massive, most people go crazy if they even see the buddhist symbol now (I remember something on guildwiki where someone used it in their sig because they were a buddhist, and got called rascist and all sorts of names by everybody and was forced to take it off by admins, even though they pointed out it wasnt a swastika =\) 212.183.134.65 13:14, 1 June 2008 (EDT)

I dont know about brawl, but in melee, Jigglypuff owns. Just do down b on someone with 20%+ damage and they die if u hit it right. ---

They de-powered Rest (and Jigglypuff in general) A LOT in Brawl. It hits for a lot, but it isn't the instant KO. They also make Jigglypuff weak, extremely light, slow (on the ground), have a crappy Final Smash unless you do what my friend did, and made it so that if break Jigglypuff's shield, it dies instantly (unless you have a sold object above you). --File:GoD Wario Sig.JPG*Wah Wah Wah!* 12:48, 1 June 2008 (EDT)

Sheik and Lucario are just uberpwnzersauce in brawl, imo.

jiggly is good with air kick spammage, well, in melee that is --InfestedHydralisk

Jigglypuff is awful in Brawl. I quote from the Brawl site:

"Jigglypuff has neither a long reach nor a lot of power to its attacks. On top of that, it’s not a particularly fast runner and is extremely easy to KO because of how light it is.

At a glance, Jigglypuff seems like an utterly flawed character, but the truth is that Jigglypuff has a few abilities that balance things out, like its superior midair capabilities."

I love and hate Zero Suit Samus. She has great moves (Side Special has huge knockout power) but I HATE her Final Smash. Samus is not nearly as good as Zero Suit Samus, and letting others get the Smash Ball is just basically death. My solution is here. --File:GoD Wario Sig.JPG*Wah Wah Wah!* 13:40, 1 June 2008 (EDT)

your sig is. *runs away from motorbike*--

You know why it's obnoxious? Because you saved the image as friggin .jpg, so half the color faded out. Lern to .png, it has none of the color loss of .jpg and none of the huge file size of .gif. .jpg was originally created for use on the internet when 56k was considered fast; pretty sure we can deal with larger file sizes (and less shitty resolution) if we need to. -- Armond Warblade

Everyone younger than me is better than me at the same time. /wrists

BP was removed, now has shadow step. Btw, most morons in AB don't have enough sense to remove a hex, because many retards don't bring hex removal. -- Come visit

Are FUCKING CRAZY!!! I took spanish for 2 years, but had such a bad teacher I switched to German. My teacher once made us watch an eagles nest at the zoo on the zoo website for 10 minutes while it did NOTHING. Then, we talked about it for the rest of class. Also, she said that we could never speak english in the class since the first day, and she spoke in english 80% of the time, while we spoke english 99%$ of the time. And, she made us do artistic drawings and graded us on them. Urs kinda sounds worse, but still spanish teachers suck. ---

Honestly, I hate Spanish. They don't know how to fucking teach it. They try to make us fluent, which is near impossible. They spend nearly all the time teaching is conjugations instead of vocabulary. Yeah, I know how to say "yo tener" in the past tense, but that doesn't matter. We need to learn the vocab very well and then maybe some conjugation. If I was lost in Spain or something, than I would rather know rough but expansive Spanish instead of good but very limited Spanish. --File:GoD Wario Sig.JPG*Wah Wah Wah!* 21:32, 6 June 2008 (EDT)

Well, here's the thing. In 6th grade, I learned Mexican Spanish. In 7th, I learned Puerto Rican Spanish. Now, in 8th, I'm learning Spain Spanish... They all have distinct differences. Teach us one fucking kind. Also, my brother's Spanish teacher got fired because he couldn't speak much English and didn't know what "fuck" was. So his students would just shout "FUUUUCK!" and he wouldn't care. --File:GoD Wario Sig.JPG*Wah Wah Wah!* 21:36, 6 June 2008 (EDT)

I am. My elementary school principle was an asshole and thought I was a retard when really I didn't know how school worked because I was homeschooled. --File:GoD Wario Sig.JPG*Wah Wah Wah!* 21:40, 6 June 2008 (EDT)

GoD, I think at least part of the problem is that Spanish, as a language, sucks. A lot. Should've gone with French and Latin like I did. I'm still pissed that my HS added Mandarin last year, and I didn't have room in my schedule to take it >.<--Goldenstar 21:50, 6 June 2008 (EDT)

German is meh. I had a choice of latin, french, german, spanish, or russian. Last year they added Mandarin, next year their adding the most common form of the language spoken in Indsia. MY lame ass school adds the two most useful languages to the curriculum, after I've already spent two years in French/Latin. It's pretty fail. >.<--Goldenstar 21:56, 6 June 2008 (EDT)

Yeah ur wrong, English is the most useful language bcuz like 3 billion people speak it as a first or second language. So, you should go on the coolest, and damn usefulness. German FTW! Actually, all foreign languages suck. English FTW!!! ---

Nothing makes another population like you more than telling them their language sucks and they need to learn yours. =P--Goldenstar 22:06, 6 June 2008 (EDT)

Yeah America is better than everybody else, whats ur point? ---

That China and India must love us like crazy for subjugating them and telling them they suck for the last century or so =P--Goldenstar 22:08, 6 June 2008 (EDT)

Yeah, Americans are rich and Chinese/Indians are poor. And we got more nukes, ah those lovely nukes :) ---

America is stupid as shit, what are you on... -- Armond Warblade

Because they made PvE fucking easy. They just put imba-ER in along with perma-Shadow Form that's now easily maintained. So they decided to screw PvP up and make PvE even easier. --File:GoD Wario Sig.JPG*Wah Wah Wah!* 16:46, 7 June 2008 (EDT)

So, I come back to playing Guild Wars a little more to find the Guild I joined practically empty because the members apparently weren't amused with GvG. The Guild is still there but no one's active. Soooo... Now I need a guild. Honestly, I probably won't be that active, and I can't find my headset for Vent, but, I'm GoD! Kurzick guild is perferrable (not needed, but perferred) for my occasional AB. --File:GoD Wario Sig.JPG*Wah Wah Wah!* 09:45, 8 June 2008 (EDT)

Give your ign and i could invite you to Picnic Pioneers if you want. Rupert=Hawt

i wont tell them its ur phone number, k? --InfestedHydralisk

The only possible explanation I can think of is that someone ninja'd the code, entered the room with the name "Infested Is Gud" then proceeded to play with GoD and you were left out in the cold. I wonder who could have done that? - Misery Is Hawt19px 10:48, 8 June 2008 (EDT)

yeh sure, hope u got patience till 27 june =P --InfestedHydralisk

Mario Kart's fun, but nothing compared to Double Dash. Also, I need to give you MY Mario Kart code, I was using my dad's and I haven't been able to unlock all the stuff on his Wii yet. Also, I know you love my mini-Cpt. Falcon (for the Blue Falcon, ofc). --File:GoD Wario Sig.JPG*Wah Wah Wah!* 11:41, 8 June 2008 (EDT)

i only like the GC for SSBM and F-ZERO GX =P. and mario kart wii is waaaaaaaaaaaaaay better then double dash, double dash is kinda shit --InfestedHydralisk

Still, the thing with MK:Wii is that they packed so many people (12 > 8) into regular fields designed for smaller amounts of people. Thus, in regular 12 people races, you get hit with an item and get sent all the way from like first to sixth. Not to mention is penalizes people who have different preferances of playing, such as the Class/GC Controllers and Nunchuck+Remote. --File:GoD Wario Sig.JPG*Wah Wah Wah!* 12:08, 8 June 2008 (EDT)

thats what u can call: game difficulty. a game shouldnt be easy --InfestedHydralisk

tbh, a game from nowadays has better graphics...but...they are so easy --InfestedHydralisk

Retrieved from "https://pvx.fandom.com/wiki/User_talk:Guild_of_Deals/Archive_11?oldid=559506"
Community content is available under CC-BY-NC-SA 2.5 unless otherwise noted.