(ECx2)This person has explained it clearly, by inserting your name above, you admit to do such action. --Tiger

Indeed, it depends highly on what is to be sucked. --Tiger

Ownz. Especially hyper mode. It can get kinda hard to save in any Metroid game though. Also, save system like FE7/8 imo ^_^ Turn it off whenever, and it's already saved right where you were. So what if it wouldn't really work in a non-turn-based game? :( Dejh 11:07, 11 June 2008 (EDT)

Well, I mean most Nintendo games just have "click save" and you can quit (Zelda, for example). But still, they make such large levels and they make Save Points few and far. If they put a lot more in or just added the save option, I would play MP3 more. Phazon mode or w/e is cool, except that it makes you lose health and has to be used to kill some bosses. --File:GoD Wario Sig.JPG*Wah Wah Wah!* 11:09, 11 June 2008 (EDT)

Saving is a problem that has two sides, good and bad. Good side is that it makes the game more convinient, time wise for a player as he can save his progress and quit at any time as opposed to quitting the game and losing all progress made earlyer making time on it spent useless. Bad side is that such an option makes the game way too easy and relaxing, that means that the player wont expirience as much tension and excitement wilst becoming bored of the game very quickly. --Tiger

Some of the better games (and harder games) didn't have all this save when you want crap. Ninja Gaiden was one of those bastards! Fucking good game though. :) Selket Shadowdancer 11:21, 11 June 2008 (EDT)

(ECx2)That's only really a problem with that one gigantic boss where you have to shoot it in like 10 different places, iirc(I think 1st or 2nd big boss, been a bit since I played that game). The other ones, you don't need to use it enough to get pwned by the health loss. Regardless, that game's awesome. Dejh 11:22, 11 June 2008 (EDT)

Yeah, but there's some games that have a save when you want option, but are still hard. For example: FE10 had a mid-battle save option on normal difficulty, and a suspend option on hard, but was still pretty hard. Dejh 11:24, 11 June 2008 (EDT)

It is a matter of human psychology and how game developers axploit it's elements to create an "exciting" game. --Tiger

Ever played an FPS like this: Step, qsave, look around corner, qsave, step back, qsave WHY THE HELL DID YOU SAVE, NOTHING CHANGED! I have, I caught myself doing it, it sucks and it's no fun to play. Taking away quicksaves actually improves gameplay experience. Timesplitters 2 had no in-level saves which made for epic gameplay. - Misery Is Hawt19px 11:32, 11 June 2008 (EDT)

Saving like that spoils all immersion in a game. I'd rather have well placed checkpoints than save every minute, just totlly ruins any point of playing games like that. RPGs however are different but still need to be thought out well. Selket Shadowdancer 11:36, 11 June 2008 (EDT)

Fire Emblem did a good job there, I think. You can save whenever you want, so you can quit a game at any time, but if you screw up, you still have to start the level again. Except with battle saves, but FE10 was alot harder anyway. Keeps the difficulty, but is still convenient. Dejh 11:40, 11 June 2008 (EDT)

Indeed, this saving system does a good job preventing the exploitation of "Save" option. --Tiger

System I think I prefer is an autosave feature where you can ONLY load the last autosave, or start again. Needs to be intelligent enough to never save in the middle of a confrontation. - Misery Is Hawt19px 11:45, 11 June 2008 (EDT) 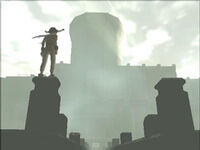 Because personal preference can be wrong or right, makes perfect sense. –Ichigo724

Personal preference can not be right or wrong, it just connot be discussed. --Tiger

i herd u liek tar

its based on in-game screen shots, so dont click it or your computor will explode--7h3 ‎n00b p0l1c3

I resized the image to 300 pixels wide and uploaded the new version. I removed the 300px from your post as it was unnecessary. Your browser cached the old version of the image earlier (so it wouldn't have to re-download it each time you see it), so it put the old image there. Control+F5 forces everything on a page to download again, rather than load the cached version, so you downloaded the resized version I uploaded. –Ichigo724

I somehow used to have fun typing "I'm wielding Your Poisonous Mom of Trollslaying." or "I have Your Mom on me!" every time someone pinged their weaponset or enchantment. –Ichigo724 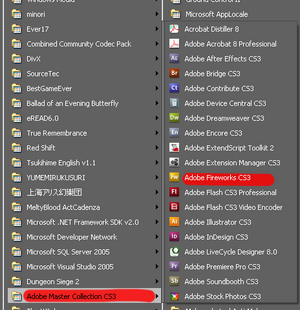 Have fun creating animated gifs in photoshop. I use PS for anything else. –Ichigo724

fair 'nuff then, as long as it's known that fireworks sucks.....~PheNaxKian (T/c)

Enlighten me as to why, though. –Ichigo724

Fireworks is basically just a simpler version of photoshop (and not in a good way), it's missing some of the most useful tools, and the tools it does have don't work nearly as nicely as they do in photoshop....~PheNaxKian (T/c)

Photoshop sucks cock at vectors though (though I use inscape, not fireworks). –Ichigo724

Me? Though I mistyped it last time, I use Inkscape. –Ichigo724

R/A Expert's Knocklock (talk · rate) I think you mis understood the build, you say talk about no IAS/ no deep wound (which I can understand) and most funkily not finishing with a dual. The build is desgined as a knocklock So you don't end on Falling spider you then go back to Trampling and go through the chain. /FrosTalk\ 15:17, 13 June 2008 (EDT)

Mostly it's weak due to cripple reliance. -- Armond Warblade

This may be a difficult concept (understandably!), but it's an assassin that isn't designed to spike. -- Armond Warblade

there's two other DW's in optionals, this build has a cover hex/shadow step, it has more damage and two knockdowns, and unlike that build the chain works without hexes. that's why it should be rated higher.--Reason.decrystallized 08:57, 15 June 2008 (EDT)

omg are you serious? thats epic. i remember tht conversation ^^--

Kinda hard to interrupt Enduring Toxin with Deadly Paradox, 15 fast casting, and mindbender. I dont even know if its possible. Or interrupting dolyak signet, lol. ---

unless u got Dshot--

nothing is hard to d-shot--

lol, pivot lets u make flash animations with stick figures with no talent or "skillz" at all ^^ also how i made my spearchucker, click mah name to see it--

Thanks for the vote. Just wanted to clarify something though. How does that not have awesome deep wound? Its got wounding strike! --

Also, please make it so they can evolve into something just as cute but bigger and more zappy. Thanks. - PANIC!

Ya about 5-6k didnt look short before the dc and yea Im totall aweasum @ heroes :P but still pitty that I wont be able to finish the title today its like less than a full book left T.T alo have some weird feeling that I wont b able to log on that pc for awhile. :( --Super Igor *ninja!!* 14:51, 22 June 2008 (EDT)

Uhm, yeah pve ranks are damn easy to max, especially the gwen ones imo (lol, 2 hours to fill a hm book :P) Luxon/Kurzick is kinda most time consuming, but still easy w/ hfff as for polymock hmm, just play it, you will get used to it, its only bit annoying at the first three battles when you dont have much piaces unlocked. :P --Super Igor *ninja!!* 14:58, 22 June 2008 (EDT)

I only run boonprot for lower end PvE. Usually I'll run Life Sheath or something, or not prot Monks at all. In other news, I just beat Pluck or whatever his name is in Polymock. Discuss. --File:GoD Wario Sig.JPG*Wah Wah Wah!* 15:37, 22 June 2008 (EDT)

My internet has done the same shit again, wont work, and well, running too much prot isnt good, ps, sb and soa all you would EVER need imo, Aegis and Guardian are good too because blocking helps a lot. --Super Igor *ninja!!* 17:30, 22 June 2008 (EDT)

I'll show you my GoDSabway eventually. It's got lots of melee buffers so run something physical. Also, I need to farm Norn and Asuran points for my Ursan. --File:GoD Wario Sig.JPG*Wah Wah Wah!* 17:31, 22 June 2008 (EDT)

Didn't we JUST have this? Stop using VoS. It's bad.

'Didn't we JUST have this? Stop using VoS. It's bad. was your commend at this: http://pvx.wikia.com/wiki/Build:D/R_Asurans_Terminator build. But i don't even use VoS......I use Reaper's Sweep so could you please delete that rating cause my other build uses VoS, not this one and you already rated that build :P —The preceding unsigned comment was added by Robertjanvaneijk1988 (contribs) .

Was about to say that myself too. Godbox

Retrieved from "https://pvx.fandom.com/wiki/User_talk:Guild_of_Deals/Archive_13?oldid=848460"
Community content is available under CC-BY-NC-SA 2.5 unless otherwise noted.