That's not fucking hard, it was still a bit OP and the nerf I think makes it worse but still workable, goo de-buff imho (actually Izzy didn't get anything wrong with this update) --Frosty

But it takes some skill to realize who to BB, whose protted, etc etc. And I'm way too terrible to even BB, so poop. --

To realise who it protted? That applies to every friggin melee character in the game that spikes. --Frosty

Ups, but you have to have pretty good weapon swapping reflexes and stuff, which I can't do. --

Whoever could have fixed AoP but was lazy did get it wrong though. Upside of BB change is now people either have to be halfway competent at weapon swapping/etc to pull it off, or have to run worse attribute spreads. It still works fine. ¬ «Ðêjh» (talk) 16:07, 10 October 2008 (EDT)

Indeed, if ur good you can get around current counters (SB and stuff), and even if your bad you can still use the bar well. --Frosty

By well I mean complete the chain ;o --Frosty

please i need you to rate again my condition paragon build because when i was inproving it i forgot the elite skill can u please rate it again?

[kthx] is thinking about doing weekly HA Saturdays at 8 Eastern. You're welcome to come if we have a slot open.

Also, you should come do eternal grove HM at 6ish Eastern with Maf and I (and possibly Cedave). Heroes and henchies split horribly.

I should be able to come, depending on whether or not my brother is still on the PC. That goes for both. --

I'm bad, but I have mostly nothing to do this weekend and I want a bambi! Hopefully you also fit these qualifications and I can come. I'm bad at taking too long to edit.

You should be able to tag along with Armond and I, worse comes to worse [Bsns] can throw a few people together. --

I should be able to around like the afternoon here (and it's about 9 am here, so probably around 5 the latest), depending on whether or not my brother gets off the PC. --

It was on TV though :P. I saw it before and I love it, but spending that time cleaning up toilet water isn't fun. --

still has a shot. All the southerner's who don't have phones will probably still vote. Although, Palin's a fucking dipshit. If it wasn't for her, McCain would win by a good bit. With her, he's gotta work his way uphill carrying a bitch who couldn't tell the difference between a snowman and a russian if it was holding an AK-74 to her face.

also, get on more and bloodspike or rspike with me. we'll win shit.

Note that they say that Palin is heartbeats away from becoming president. Don't they mean lack of heartbeats? Error converting thumbnail:Image:JebusSigNew.jpg

about this. i think you should use it.

Most Bacon Bits are actually made out of things like soy, not bacon. Also, Pepperoni Combos are veggitarian. --

Tbh vegtarian is for faggots. The only time you're a vegetarian is if it involves getting you laid--Golden

Or if you've been one for your entire life and see no way or reason to turn to someone who eats meat. --

I'll settle for my soy bacon, thanks. --

Chanced Scourge Healing to Power Lock, So please reconsider your vote and check Talk Page to. i know i won't be a Great Build but atleast not an Trash Build. Fox007

i just noticed u send me a communism brawl map some weeks ago ;o InfestedHydralisk

noticed, u being bad? =( InfestedHydralisk

anyway, me and some friends got pretty addicted to SSBB now and we go pwn at many tournys now InfestedHydralisk

I play it now and then but it's gotten a little boring. Online is too laggy and my friends don't usually come over to play it. --

online sucks indeed. but me and some friends got addicted to brawl after our first brawl tourny, it was so fun pwning so hard. now we go try/show combos to each other now and then, 23 nov is next tourny :) InfestedHydralisk

It sounds really fucking awful in English though. --

I heard Chacarron a week agho for the first time. I went to dictionary. com translated it and now it makes less sense. "Is it epilepsy or stupidity" - Pink Panther--Rikuno 18:39, 15 October 2008 (EDT)

before crying to admins...

how the hell you cant manage to tell the differense between meh and Raskay, Its so obvious!! QQ --Some random account of randomness 18:22, 16 October 2008 (EDT)

You both have similar slang internet writing styles, TBH. --

It's actually pretty hard, seriously. Also, IDC if your comp is broken, get on Guild Wars more. Seriously. -- 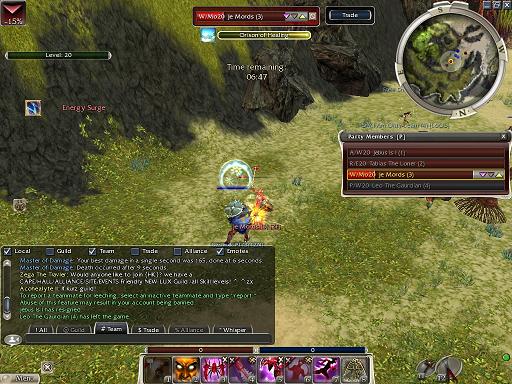 Orison is a great powerheal on a Warrior. --

Ups, it's just a display of their amazing musical talent and how they can make love to drums and guitars. --

Is generally for important issues such as poor voting on builds where votes count, vandalism and harrassment. In future, please refrain from tattling on other members of the community about things that really don't matter at all as it tends to send me into a blind rage. - Misery Is Friendly

Erm... I was reporting something that needed to be done. --

You seem to have missed the difference between reporting and tattling:
We can see who did what as soon as we go to undo it, clear? - Misery Is Friendly

You could've just REMOVED the vote. As much as I love you, Misery, don't blame me for an overreaction your behalf. I posted it on the AN when Skakid restored, it was removed. It was restored many times by Skakid before he was re-premoted and it was removed everytime. You didn't have to freak out and destroy it. --

any more the eviscerate executioner's strike spike don't work that much but it's fairly effective. very weak against any type of anti-melee and shock is a costly interrupt skill. Ojamo (>.<(O=(- -Q) 07:24, 20 October 2008 (EDT)

Is win. Pity he died, but his jokes were awesomesauce.

"A Wisconsin man was arrested the other day because he made an unauthorized deposit in a sperm bank."

"Police apprehended and arrested a one-armed man at a fishing pond as he was annoying the other boaters by continuously rowing in a circle."

lol he takes the wincake.

George Carlin is just classic, as is Richard Pryor. I'm not a huge Bernie Mac guy, but he was funny. --

Are these guys you're talking about comedians or entertainers, because stephen colbert is not a comedian. --Frosty

Stephen Colbert is a god amongst mere mortals. --

I was about to say, Colbert is a great entertainer but no comedian. --Frosty

Jon Stewart is also a god. Both as an entertainer and a comedian. --

Any of the entrances to them, really. Just PM me or something. --

Is that Misery trolling Guild of Deals? Oh boy! :> ɟoʇuɐʌʎʞɔıɹ

18:58, 23 October 2008 (EDT)
(EC)I actually had some very astute and succint points I think you will find, please read it again more closely. I think Guild of Deals will understand what I meant. If not, he can ask me later some time. - Misery Is Friendly

I'll get right on that. - Misery Is Friendly

Although you're only admin with atleast one testicle. As much as I love Dont, he's just a little too soft on things and bans people way too much, and as much as I love Phenax, he just doesn't give those judgmental bans. I see greatness in the future for Misery. --

lol i just noticed ur sig is very commie

How to stop addiction to pvx

I tried and it didn't work. Mainly because everyone in my school is boring and everything else on Facebook is retarted. --

I fail to see any differnce between Facebook and PvX then. Selket Shadowdancer 07:29, 24 October 2008 (EDT)

And it's made to be as complicated as fucking possible. I got problems finding my "idiots who wants to be friends with me for some fucking reason", actually; I've never found it really. Godbox

be nice to godliest :< ɟoʇuɐʌʎʞɔıɹ

Your vote is DAMN BAD! Dude, 1-1-0. That hero build, is one of the most used and aweasome things to run on a hero. First of all it provides great defense; foes in pve autoattack right, GE means they gonna knock down thmselves all the time, it also has good damage and miniscule rechrge for an aoe spell. IB has great synergy with stoning and glowstone which also give it more damage, enrgy management and another kd which is nice in PvE. Ward is blocking. Is it unfocused? No, it has a great balance between damage and utlity, which imo is earth magic all about. Also, who the hell are you listening to? Karate Jesus is a damn nub, "lolol, Earth Prayers is defense, uh, giv it mor useless enchies, uh...hero tanks are gud" LOL, revote...NOW!. --161.53.65.2 19:21, 24 October 2008 (EDT)

That was possibly the single most non-convincing piece of text I have ever read. If you're trying to convince someone to change their vote, don't go "THIS IS AWESOME! THAT OTHER GUY IS A NUB!" As for changing my vote, no. --

Where? Because if you refer to the text above then I can't do much else than laugh. Godbox

This build is better used as two different people, aka an IMBAgon and an SH ele. It lacks focus because it's a combo of damage and defense, but both the damage and the defense sucks besides Eruption. Even then it's inferior to the IMBAgon. It's more worth it to split this into two characters.--ツThe Gates Assassin 13:39, 25 October 2008 (EDT)

The problem with this build is not the lack of focus since earth eles were meant to be more focused on defense anyway. Ward against melee is a decent aoe damage mitigation spell when hero/henching(they clump a lot, and it certainly won't reduce your damage output a lot using the ward while unsteady/eruption is recharging, if any at all). The problem is really that the damage output from this build is much lower than SH eles, and imbagons are better as support. A build that does more than one role has to be decent in every role it tries to do. This is where the problem lies.PikaFan

No problem. Just make new articles instead, next time. --

Retrieved from "https://pvx.fandom.com/wiki/User_talk:Guild_of_Deals/Archive_26?oldid=727316"
Community content is available under CC-BY-NC-SA 2.5 unless otherwise noted.