I think you should reconsider your vote for the build Stunning Spearmaster. For one thing you gave it a 0 which it clearly doesn't deserve and for another the reason you listed to give it such a bad score is false. You are clearly biased and have never tested this bar or played any paragon version of it (which is far worse). If you do not wish to think about or provide a logical reason for why a build is bad than simply don't vote. Also on my team build for TA you recomended the monk drop Sheildbash (easily best monk def skill for TA) and take wirlwind and GOLE i think this must be a joke as energymanagement in TA isn't hard at all and wirlwind is far worse then sheild bash. Taking 2 skills like this forces you as a monk to give up a skill that you can't afford to lose. Maybe you havn't monked before but i invite you to try your funny suggestion. I Heal If U Shutup 12:38, 26 February 2008 (EST)

stfu rate how it is and it sux

First of sign your commments, second if you are talking about cripshot, you are an idiot.--

Hey Guild, you said you'd be happy to rate my necro build earlier today. Just thought I'd let you know I threw this into Testing and was hoping you could throw a rating on it. Thanks --

Yeah tried to fix that, but you already have seen it so w/e --

Found it anyway and rated. Sorry for low innovation :O --

No prob, it isnt very original after all --

Lol, innovation is probably the least needed category though. If it works, IDC if almost every build is like it. --

Thats always been something thats bugged me about this site and the ratings. How inovative it is has nothing to do with the build and how it performs. say like a 5-5-1 build, 1 being inovative, which causes it to be a good instead of a great build. I find that bullshit, I wish it would be removed from PvXwiki. --

Innovation only is i think like 20% of the rating. DE made really good plan to make it so that you click a check box if you think the build is innovative.--

Because throwing Wastrel's Collapse on is just plain stupid but it's "innovative" for "using an unused elite." I think we should stick with DE's plan and maybe add a tag that "the community has found this build to be innovative" but would not affect the rating. --

d/c and cant get back =o --InfestedHydralisk

kk, but remember...i pwn all with super smash --InfestedHydralisk

Good enough to make the "Good" category. And still, it's the original and it works. --

I was born and raised in New Jersey

this nub is Grinch :O. Still, I'm about almost 15 and have no problems with NJ... persides the fact it's New Jersey. --

North or south jersey ( what county)

O.o Im from essex county. Well used to be from like Camden county but i moved :P

Your state smells! But the white peaches are great, so... - zomg!

We hav peaches? I thought all we had was drugs in schools

LETS LOOK FOR THE GREAT TRUCKLOAD OF POT IN THE MARIJUANA FIELDS CHARLIE BROWN!

I thought that was the Great Pumpkin. What pothead sits around in a pumpkin patch waiting for some giant pumpkin monster to give you presents? --

GuildofDeals 09:53, 2 March 2008 (EST)
Yes. NJ has some pretty good peaches. Atleast the NW corner does anyway. Use to drive across the border to get them from the little farmer's markets. Hungry potheads who plan on eating him mebbe? - zomg!

For future reference: EVERYTHING IS BETTER THAN TEXAS. Our beaches are pretty lousy, forests are lousy, and Six Flags sucks. --

Are Beaches do suck /agree. Forests are aweseome mannn. Six flags has too many people. Ironicly this is one of the smallest states, yet the most populated. Jersey schools suck because they cant scrounge around for a penny to buy decent stuff

That's Camden and Trenton schools. Are forests are well, forests. Nothing special. Still, Six Flags was never fun to me. --

My schools pretty 1337 tho. all the classrooms are seperated around campus. Its like college only.....gayer

Zomfg, it's a 3 second cast with fast casting and you deal more damage, what's not to love? 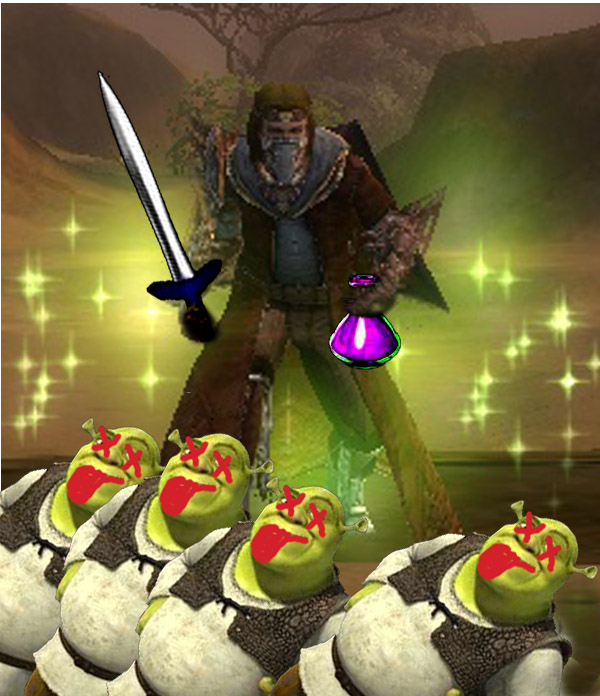 I ate the other one, i was hungry

Why are you slaying things with a potion?--

Oh yeah, you need to be nominated and chosen by the administrative staff. Forgot to mention that. Atleast you're halfway there! --

Thanks for gettin my hopes up :( lol. Id love to be an admin tho.

Ur vote made me sad, there is a 1e skill, it's displayed wrong, but DP is 1e, so there is a netto energy gain with this build *cough* energy regen *cough*. Check the optional skill which was actually made for a snare, you asked for.

Still doesn't hope the medicore pressure and unreliable snare. Still, ask a BM or Admin if you truly disagree. --

First off, SKAKID IS A FUCKING TANK! Second, that was some epic trolling, Skakid. --

Find a picture of a giant spaghetti monster! Seriously, I want one. Gogogogo! --

[2] THAT IS A SPAGHETTI MONSTER

why did you give my build such a bad rating? I understand you may not like it, but it doesnt deserve a 1. The survival skills aren't crappy, and are highly useful, giving health, health regen, and armor. The energy management is as good as it needs to be to use what you need to, and it's not supposed to have great attacks, it's a Tank. Please consider re-rating, I don't want a 5, I just don't want a bad rating that this build doesnt deserve. Thank you very much for your time, I'm not complaining, I just would like suggestions on how to make my build better, or at least more effective, instead of a rating of 1. BalthazarsChampion 18:36, 4 March 2008 (EST)

Retrieved from "https://pvx.fandom.com/wiki/User_talk:Guild_of_Deals/Archive_27?oldid=433266"
Community content is available under CC-BY-NC-SA 2.5 unless otherwise noted.