Your not first if you don't, Rally-Kupo!

Next time you want to promote something

Leave a note on your user/talkpage, instead of a dozen of others'. Anyone who cares about these things is probably having your page watched, so spamming around the wiki is unnecessary and should be avoided. ~ ĐONT*SYSOP 06:17, 27 December 2008 (EST)

McMouseContests 11:24, 27 December 2008 (EST)
Dont, I would've never seen any of this stuff unless he posted it on my talk page (like he did <3). So your theory is obviously wrong. Looking at user pages is fail. Nowadays, we just spam the shit out of people's talk pages and they see whatever it is they need to see. Case closed. – ツtalk

Using the watchlist is acceptable and highly recommended. "Spamming the shit out of people's talk pages" is unnecessary with watchlist in place and a bannable offense. You don't even have to look at the userpage because the user can write a summary to let others know what did he add to the page (which shows up on your watchlist). So your theory is obviously wrong. Case closed. ~ ĐONT*SYSOP 08:02, 29 December 2008 (EST)

Except no one reads user pages even if they are on a watchlist. So your theory is obviously wrong. Case closed. – ツtalk

If they don't read pages on watchlist why did they added them in the first place? Your theory is obviously wrong. Case closed. ~ ĐONT*SYSOP 17:41, 29 December 2008 (EST)

You cannot only add the talk page to your watchlist; you need to include the userpage. Fuck off. --›

Srs Beans R Srs 17:59, 29 December 2008 (EST)
Exactly what Srs said. Maybe if someone decided to code a way to add ONLY a talk page and not also the user page to the watchlist, then your argument might hold some weight. As it is now, it holds none. – ツtalk

One of the few (well not few, but i disagree strongly with his banhammer skillz) times I agree with Dont. Stop being retarded. Rawrawr Dinosaur 18:27, 29 December 2008 (EST)

You're asking too much of the internets. But whatever. I'll drop it and leave it at me allowing Jebus to "spam" my page with new contests and stuff. – ツtalk

i want my little box nao for my userpage, i won that beotch.make me one anyway b/c you know ide win.*Un*ɖɩđđɭɘş —ɱƈ^Ŗęąḻ^ḻƴƿʃooƿʂ

Lol, yeah, it's awesome. I like Tracy, matt, and daphne.

you get a cookie for your name, Sui Cidal --—Daɽkɘʃʂ ӍcÇɧɽiʂtmaʂmonǥɘɼ

Read my contest entry and when does it end--

when there are 7 entries. why 7? cause im awesome. Jebus

I can see it clearly...--IkimonoI know Paragons. Shut up and listen

speaking of sigs, how do you link an image (like my Monk/Para image) to your userpage. you've asked me to do this but I don't know how to.--IkimonoI know Paragons. Shut up and listen

Placing #REDIRECT User:Ikimono will do that. Jebus 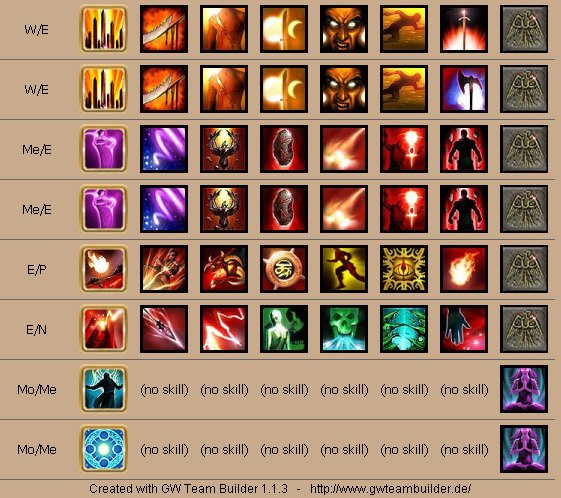 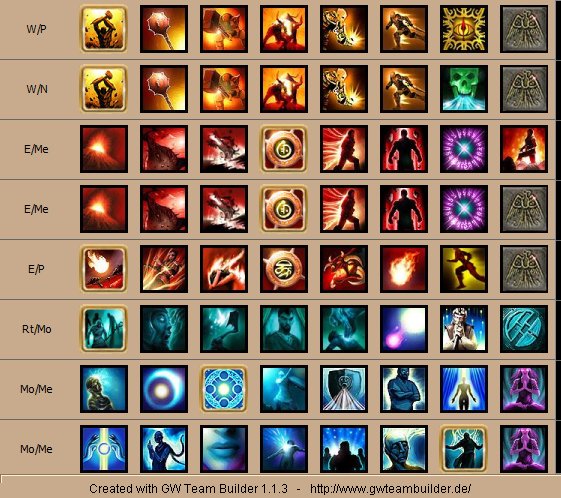 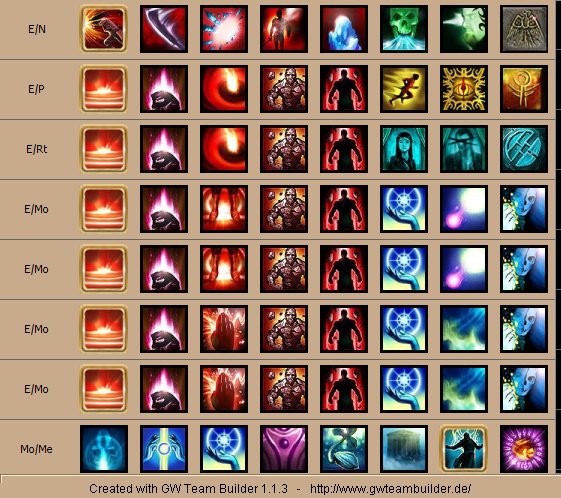 seems like anonimous would be perfect for the job. Jebus

not really. just put a delete tag on it. Jebus

that was a request, not a statement. Jebus

WHEN YOU THOUGHT I COULDNT BE ANY MORE BAD 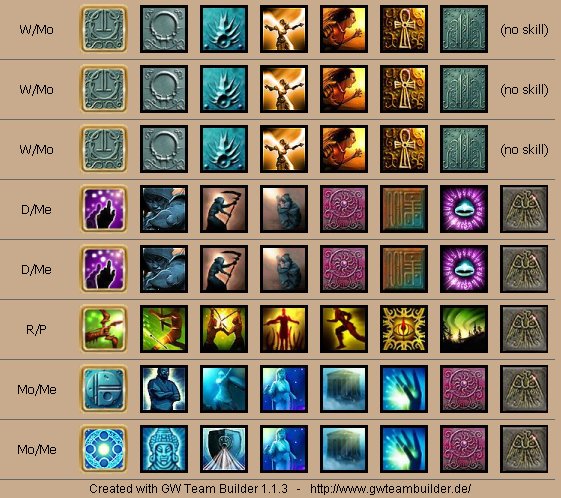 tell me i fail. Jebus

so basically all you need to do is kill the spirit not be horrible don't go afk and you rape this team? --

Your RA screens with the Wammo

You had a N/Rt healer on your team, you lose all honor

Negative Honor [nH] (see what I did there?)

Brandnew watches my talk page just to flame me. <3 Jebus

But u dont flame people. :/ Jebus

You do realise sucking on Crow's penis isn't going to make Skakid like you any more/hate you any less right? -

evis is gud-ol-fashioned chop 'n shock. I agree that its obsolete now, but Prage can have energy issues under pressure (what with canceling) and WE doesnt have disruption. Jebus

considering that Prage's main and only advantage is Prage to fuel its disruption and damage, Prage has a greater energy concern than evis. Jebus

Good luck not getting hit every 18 seconds. Jebus

Is that every "A" skill? crazy

i liek ur enthusiasm in doing this tedious work

Livin' on a prayer--Bon Jovi. Lol, i finished B's and C's. Jebus

D's are begging for some Van Halen. Life

Im done for tonight, and im doing two songs by System of a Down tomorrow. Jebus

Long song is long, but ill go for it. Jebus

Stop having the illusion that you will ever become admin. Ricky

This comment is my 4445th contrib. G'night peeps. Jebus

My sig is too huge to not be on a template, it's been fully protected by an admin, and I dont plan on changing it; if i do, ill make a new page. Jebus

i don't think Auron was asking =s. The points was using a template puts a huge strain on servers, so you should stop using them. Temapltes weren't even supposed to be used to ignore the rest of the rules set by Sig anyway.
In reguards to what you said on GoDs page about not being able to subst 6 lines into you're preferences (the 6 line part aside) you weren't substing it. You'd place your sig on a page (such as User:I Am Jebus/sig) and in preferences you put {{subst:User:I Am Jebus}}. That little bit of code is all that'll show in you're preferences, and when you sign your sig will work fine (it won't be a template) ~ PheNaxKian Sysop 06:47, 17 February 2009 (EST)

On voter's talkpages; would you rather it all be on the page itself? Jebus

build isn't for spiking, L-Orb is easily side stepped, no cover conditions for blind, gale causes exhaustion (there is a reason people stopped using it) why use disc stance when you can cripple + kite (you meaning instead of 75% block, you get 0 hits) also bringing a blocking stance on a build meant for blind spam is lol worthy... what else. hmmm --Drah 22:19, 17 February 2009 (EST)

If the build isnt for spiking, what's it for? Pissing the hell out of warriors while not doing enough damage to trigger Merciless? Bring a water mes for anti-melee. Disciplined is never bad ;o Jebus

if i were an admin

a lot more than four people would get perma'd. For one i'd ban luke so fucking hard he'd never see the light of day, thinking something on the order of banning the entire IP range for his whole county.--Golden

i lold. My best is like 2k meters or somthing Darklɘs McChaosmongɘr

I haven't flamed you yet ofn this archive.

You are a fucking nigger.

i trolled in retaliation :3 Jebus

Thanks for trying, but you need to learn to rhyme before you try to copy someone's format. – ツtalk

Dark and Infidel, they suck at poetry.

Chaos got annoyed and wrote some faggotry.

Dark and Infidel said "el oh el" you are dumb.

Nao Jebus came and told all to stfu.

So the trolls allied and went "no you".

But many faggots, they just don't fit together.

So Dark, Infidel and Chaos are at war again.

Then Auron permabanned me for not rhyming this line.

Afterwards he said "He's a nigger, the line was actually fine".

And nao Jebus said my poem does indeed rock.

You're all bad at rhyming
You know this is true
Since Frosty is the ownz0r
And he ownz you
So please stop the bitching
Since it won't help your case
Lets leave this talk alone
Or i'll ban your face!

frosty owning?
what a joke
makes me want to smoke
so stfu you hoes
jebus really blows
chaos is kool
and crow has a big tool
you may may ask how i know
like i said
its because hes a hoe
dont cry that your dead
and give crow some head
and frosty
your moms really toasty
Darklɘs McChaosmongɘr

Oh no, look what I've done. Fucking poetry games.
Go fuck a duck, all of you dumb dames.
Seriously, this shit is gay.
I'd rather jerk off all day.
And hey
I just may
Go down to the bay
To-day
and jerk one out while I lay
And then I will shay
ve.
(Seriously though, this poetry is getting lame, except for Jebus's and Frosty's. Those were quite epic.) – ツtalk

By the way Dark, Frosty and toasty do not rhyme. lrn2english. – ツtalk

Retrieved from "https://pvx.fandom.com/wiki/User_talk:I_Am_Jebus/Archive_3?oldid=843902"
Community content is available under CC-BY-NC-SA 2.5 unless otherwise noted.