You know, its funny that you should get banned right now. Anet just went INTO MY ACCOUNT and left a ban threat on my wife's D/Me Hoochies Mamma for being an offensive name. She hasn't played that character in 2 months, and they went INTO MY ACCOUNT and flagged it in my lobby. Hoochies Mamma is offensive? Our daughter's nickname is Hoochie, for christ sake. Someone at Anet needs to grow the fuk up.--Α--йĨйƏҒỉйGƏЯş--Ω 06:55, 29 August 2009 (UTC)

May I ask how your daughter got that nickname? :o BLUE LAZERSEat It

I just got banned for the dick spamming in RA D1. ~ Big

Go to Gailes official GWW page and spam her with this. That's what I'd do. (again) ~ Big

Apparently, she used to handle community relations for Anet through Guild Wars. Now she decides whether someone gets banned or not. ~ Big

You can skin the female toons like whores in knee-boots and fisnet stockings.. thats fine. You can program them to do seductive stripper dances.. Fabulous. You can let kids get away with ranting shit like this all day, every day in RA: 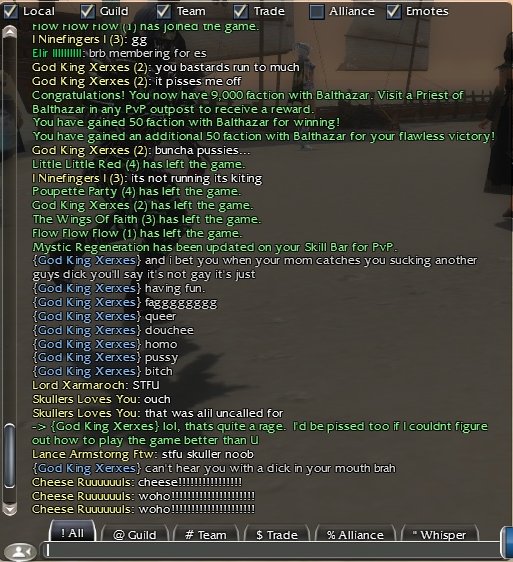 .. Wonderful, but the word Hoochie's is too offensive to bee seen by the little kidletts. Congratulations, you're the last bastion of hope safeguarding the morality of our youth.

I would like nothing more than to be able to join you in this righteous endeavour. Are you hiring, by any chance? I don't have much experience, but I can hang witches, I can burn books, and I can hear messages from the devil in Rock & Roll music. I'm also williing to relocate and work cheap.--Α--йĨйƏҒỉйGƏЯş--Ω 15:35, 29 August 2009 (UTC)

Where to post on Gaile's page if you want to see what's up with the ban. BLUE LAZERSEat It

I won't be trying to get the name ban reversed. I'm not going to lower myself to the point of pleading to get someone to reverse asinine behavior. Never have been that way, never will be. Its usually a safe bet that people who make moronic decisions usually have a penchant for it and will continue along the same path, no matter what the opposing arguement is. I just take the lumps and make an attempt to bring their stupidity out in the open.--Α--йĨйƏҒỉйGƏЯş--Ω 22:37, 29 August 2009 (UTC)

Well there are some pretty young kids that play Guildwars, so name restriction is reasonable to a point. Can't do much about language except use filters. Also a hotkey to toggle "do not disturb" status--Relyk 22:59, 29 August 2009 (UTC)

Actually, Guild Wars has a T rating. If anyone is playing Guild Wars below the age of 13, they are doing it illegally. I have a 13 year old at home, and I can promise you that if you think something like 'Hoochie' is going to offend or corrupt a 13 year-old today, you are terribly mistaken.--Α--йĨйƏҒỉйGƏЯş--Ω 23:43, 29 August 2009 (UTC)

I just walked past my 13 year old brother talking about 'hos' on the phone. Whores, for the uninitiated (non-black). ~ Big

I always have to chuckle when I see little 12 year old mexican boys trying to be gangsta with 'tattoos' up their arms wearing muscle shirts and the slicked hair. — μαφλεσ 03:50, 30 August 2009 (UTC)

Playing a game rated Teen when you're <13 isn't illegal. The ratings are just an advice for parents.
Selling the game to someone underage w/o parental consent is illegal, though. ---

The amount of impersonators

Is laughable. I can't count the amount of times I've seen Ninetoes, Ninefingorz and all variations on the name, playing your build. And they don't even play it well.--

Perhaps you can cause them all to do a ritualistic suicide? Playing against them with dev hammer is annoying as shit. ~ Big

I'm really stoked about the proposed 4v4 changes. Specifically removing the 10 round cap from RA. Don't really care what they do with TA or HB. The only thing is, they better get serious about doing something about the syncs. In my experience, beating a team that has 2 people synced in isn't much of a problem. Its when you go up against douchebags that get 3 or 4 synced together that it gets to be a pain in the ass. I've noticed recently, people aren't even trying to hide the fact that they are syncing. You can see 4 people from the same guild doing jump tests and people advertising a sync on the RA beach every day. They get rid of TA and remove the RA cap, its going to grow exponentially.--Α--йĨйƏҒỉйGƏЯş--Ω 17:06, 31 August 2009 (UTC)

Linsey said they're going to address syncing, but I doubt they'll do anything about it. If they couldn't figure out the XTH, there's no way they'll figure out syncing. Anywho, I hope they add more maps to RA since it will obviously be one of the only remaining choices for lower end PvP.

Oh, and people don't have to hide the fact that they're syncing. It's not bannable, according to Regina. So...as long as it exists, people will do it.

There would have to be a way to shuffle the decks when people load in, even if they had to take like every 3rd entry and hold it over for a re-start or add a random delay when you hit the enter battle button. Beating syncs wouldn't be that big of a deal if GW just had integrated voice-comm.--Α--йĨйƏҒỉйGƏЯş--Ω 17:15, 31 August 2009 (UTC)

Remeber, this is Anet we're talking about. Nothing is "easy". It took months of work just to figure out the XTH code problem....and they still don't know if they can fix it.

Tbh, if it was a serious problem, it can't just be fixed over night, cut them some slack, a-net developers aren't the people you should be venting anger at, it's the skill balancers! --Frosty Mc Admin 18:20, 31 August 2009 (UTC)

What I've never understood about Imbue is....why do dervs have their own version of Infuse? Their weapons are designed to spike, their primary is energy management whether you're being rended or Mark of Fucked, and the support they can give is oddly high. What exactly are dervs? I mean my main character is a dervish, but I never really questioned the exact purpose of them. Warriors frontline and deal damage per sec on par with casters. Monks and rits support and heal, the rits doing the former better. Eles blow shit up, and necros are general debuffers. Mesmers basically keep the blowing shit up and debuffing down. Sins spike, I mean that's generally it. Paragons are full-on support. Rangers are also disrupters to everyone. And really need to be toned down. Then you come to the dervish. What. Is. Your. Purpose. Mr. Dervish? Someone care to explain? ~ Big

Apparently, no one knows.

IMHO, the Dervish is utilitarian. Kind of the proverbial Jack of all trades, master of none. The Dervish is the bastard child of guild wars, which is why I luv them so.--Α--йĨйƏҒỉйGƏЯş--Ω 19:31, 31 August 2009 (UTC)

A) The Dervish was added because ANet needed another way to severely fuck up their own game because P and Rt weren't enough.
B) I'll bet you fifty dollars that ANet has no intention of fixing the XTH bug. Anyone realize just how much it used to flood the economy? Key prices are finally back near 5k if you're patient (from a low of 3.2k).
C) I certainly wouldn't want to be the one adding code to the match-pairing mechanism. It's easy enough to break a PHP based website, let alone how complicated the inner workings of Guild Wars must be in order to make it even mildly efficient.
···

(EC ×2):STAY BEHIND THE SPIRITS! THEY WILL PROTECT U. WE'LL PROBABLY DIE IF SOMETHING WITH AOE ATTACKS US THOUGH. AND I'LL CALL YOU ALL NOOBS. ~ Big

one of my pet peeves is healers who underextend and throwing a fit when people start dying. If one person runs away from you, they're overextending. If 3 people are out of range, you're underextending and need to learn to follow your damage. There is nothing more annoying than a healer who starts looking for excuses when he drops someone. well, that and the people who run off to gank the priest. For some reason people can never stay together on the priest map.--Α--йĨйƏҒỉйGƏЯş--Ω 20:58, 31 August 2009 (UTC)

I always gank the priest, but I'm usually some kind of Ranger with a blocking stance or a Warrior so it's not like I'm taking pressure. ···

I'm such strong war that I can solo 3 people from a decent team and still have time to rez before I degen out. ;o ···

Depending on how fast the other team drops, I choose when to gank the priest. If they're all dead before we hit 11:00, then I'm gonna go gank. ~ Big

Lil' Pimpin... Destined to be the future king of RA. I've already started explaining the mechanics of E-management and tanking melee to him. As you can clearly see in the picture, he's contemplating the finer points of his last lesson. 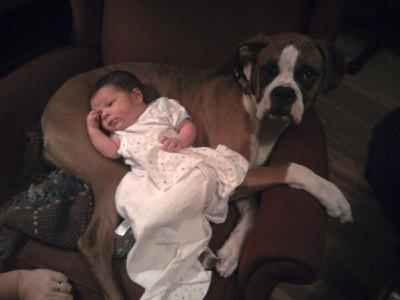 He's gonna roll with a legendary

That's a pretty awesome dog there, too. --JaiGoesMonksassin

AWWW BABIES. I love kids, even though I lie to myself. My quasi-girlfriend and I both have 2 year olds. She has a girl and I have a boy. With different people of course. ~ Big

Rotts are cool. Unfortunately, where I live has pretty asinine ordinances, no more than 2 dogs per house, no Rotts, and no Pitbulls.--Α--йĨйƏҒỉйGƏЯş--Ω 18:20, September 1, 2009 (UTC)

Well, Anet's attempt at stopping syncs was a complete bust. I assume it was probably because people were testing the water to see if the fix worked, but syncs were all over the place in RA last night.--Α--йĨйƏҒỉйGƏЯş--Ω 13:15, September 3, 2009 (UTC)

When you enter RA, you will get paired with people from AD, ID, Korea, whatever. All districts are supposed to be linked, from what I understand.SYNC FIX?--Α--йĨйƏҒỉйGƏЯş--Ω 13:52, September 3, 2009 (UTC)

the only thing anet added or changed was random disconnects, because they forgot to include an armor texture or something. i get them like every 2 minutes, even after -repair. :< ···

Retrieved from "https://pvx.fandom.com/wiki/User_talk:Ininefingersi/Archive_3?oldid=959307"
Community content is available under CC-BY-NC-SA 2.5 unless otherwise noted.