I have a screenie somewhere of you earning me 2 glad points with your derv healer. I didn't even know you were on PvX. HI! ~ Big

I don't know how 'on PvX' I am. All my builds get tanked off here, so I don't do much except bullshit with these low-lifes when I should be working. Its actually pretty good therapy. When life starts dragging on, a little online banter with some of these jokers reminds you that shit could be a lot worse. ;) --Α--йĨйƏҒỉйGƏЯş--Ω 13:48, 17 March 2009 (UTC)

My new tactic for farming Glads in Arenas .... The resign spike .... 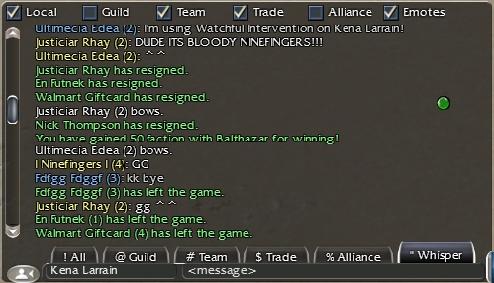 Time to Retire the D/Me

I challenge you to make a Death Knight that works.----

A Necromancer/Warrior, usually with swordsmanship.----

A Six-Pack of Bullshit

How is it that a Bullshit PvE flunkie game like WoW gets a signature 'Game Fuel' Mountain Dew? I would be more inclined to give WoW a signature Tampax. Anyone on here work for Anheuser-Busch? Someone needs to make a Guild Wars signature beer spiked with a shit load of caffeine. Call it PvPilsner or some shit.--Α--йĨйƏҒỉйGƏЯş--Ω 14:33, 3 June 2009 (UTC)

appealing to wow is a smarter marketing decision, this is all that matters. --Mafaraxas 15:10, 3 June 2009 (UTC)
Whatsup nine fingers. Ive met you in ra quite a few times.

More likely it'd be the other way around. ---

Ol' Nine took a 3-day ban for having a character with the word condom in the name. I guess a person needs to be careful who he rolls in RA. The word condom may turn pornographic all the sudden.--Α--йĨйƏҒỉйGƏЯş--Ω 14:52, 20 July 2009 (UTC)

The Ninefingers Dervish healer took a pretty serious buff yesterday. Armor of Sanctity now causes weakness to all adjacent foes. Perma-weakness spam. It is now almost invincible to melee and you can give weakness to non-attack skill using characters like Eles and reduce their damage to you. Also, there is no more need to use Shield of Force to pass weakness. You can swap it out for Fleeting Stability. IMO, Armor of Sanctity is way overpowered now, and I can't imagine this buff will last long. It puts your survivability thru the roof at no energy cost with the Mysticism bonus and with a 5CD on AOE weakness, its hard as hell to keep cleaned up. I ran it last night and it was 10 run after 10 run after I stopped dicking around with testing mods.--Α--йĨйƏҒỉйGƏЯş--Ω 14:02, 7 August 2009 (UTC)

Pious Concentration is a great skill, but since almost all your spells are under a second cast, +24 armor from something like Vow of Piety or Conviction wouldn't be terrible. ···

I'm kind of neurotic about not getting interrupted and I would feel completely nekkid without PC. Besides, its just friggin sexy to roll SoPL while the rupts just bounce off. Anyway, the AoS uber-buff turns the D/Me into a pretty serious tanker the way it is.--Α--йĨйƏҒỉйGƏЯş--Ω 23:55, 23 August 2009 (UTC)

Wasn't there a shitter named funk in mPPq? I trolled him hard in RA, then in TA. I'm ignored now. :( ~ Big

Saw you again in RA and forgot to ask. He was an ass. Raged about me dazing his monk in RA on a consistent basis. Then ragespammed me for like 15 minutes. It was awesome. Oh yeah, had me on ignore too. ~ Big

Thanks for the free glad points a couple days ago :D and also sorry about the condom ban, saw you talking about in ad1 RA awhile ago also x[ BLUE LAZERSEat It

That'd be lulz. What was Condom's name? ---Chaos- 19:10, 25 August 2009 (UTC)
(EC) If you've got a good lawyer, go for it. It'd be hilarious if you won. As for "Sofa King", I'd imagine the same person who reported you probably wouldn't be patronizing those establishments. It's been long known that GW Support is pretty.. well.. bad? I think bad is just about the only word that fits there. I mean, they try, but they're so inconsistent and negligent that it hardly matters. ···

Yeah, I kind of liked the name. After the ban was over, I was going to rename the toon "I Durexplosion I", as in Durex condoms, but my wife had a fit because she plays the same account and didn't want me pushing my/our luck. I wound up renaming it "Amaurotic Idiocy" hoping someone there would realize its a veiled slam. Anet is pretty asinine with their banning policies. I have a GW friend who took a ban for the name "Hexual Abuse" on his necro. They forget a lot of times that Guild Wars players are their customers who put food on their table. It isn't a very good business practice to go around being a prick to your customers.--Α--йĨйƏҒỉйGƏЯş--Ω 20:31, 25 August 2009 (UTC)

Any idea who I Eightfingers I or I Tenfingers I are? They you or you having copycat D/Me healers? o.o Fcking annoying, beat one of them after about 6 minutes and the other stopped us on win 7 >.<' BLUE LAZERSEat It

What I've learned: Nigger is offensive and bannable. Calling people faggots, cunts, and otherwise telling them "fuck you die in a fire you faggoty cunt" is bannable. Posting swastikas in TA is bannable. Being on the name King Dethlok and being reported, is definitely bannable. ~ Big

There is an I Eightfingers I, I Tenfingers I, I Nine Fingers I, I Ninetoes I, and a few more I can't remember. None of them are me. Whenever I'm on at the same tame as one of them, my chat window explodes with people saying "Have you seen so and so?". I bought a pre-order with Beta access for AION and someone has already stolen my name on there and it doesn't release for a month. I actually lost a match to my own build awhile back. That was pretty tough to swallow.--Α--йĨйƏҒỉйGƏЯş--Ω 13:41, 26 August 2009 (UTC)

maffles le troll. ninefingers is an aerospace engineer for what I've narrowed down to one of two businesses! (I'm pretty sure I know which one it is. Business jets =/= passenger jets, but that's not to say there aren't divisions in each.) he is very intelligent person, so at least that's a nice change from most of pvx. ···

I've contracted for Boeing (Now Spirit Aerosystems) and Learjet. I'm at Hawker/Beechcraft now. Don't be assuming any extreme level of intelligence is required to design or build airplanes. I know what kind of people do it.....I don't fly unless I absolutely have to.--Α--йĨйƏҒỉйGƏЯş--Ω 15:22, 26 August 2009 (UTC)

Its not really a matter of someone being better. Everyone who RA's regularly has been beaten by me and most everyone has beaten me at one point or another. Actually, all around, I'm probably one if the worst G7 level players in the game. I have just played one decent build ad nauseam. Two things I try my ass of to never let happen is to be beaten by my own build and to let someone solo me. Everything else is just 'shit happens'--Α--йĨйƏҒỉйGƏЯş--Ω 15:45, 26 August 2009 (UTC)

i meant it in a completely non-offensive way ;o. for any person, there exists someone better than them. this is what happens when i take real analysis. — μαφλεσ 15:57, 26 August 2009 (UTC)

HAHA, unless you're leaving peter tracks on my wife or something, you'll have a hard time offending me--Α--йĨйƏҒỉйGƏЯş--Ω 16:03, 26 August 2009 (UTC)
THAT DEPENDS ON YOUR DEFINITION OF "BETTER," MY DEAR WATSON. ···

So you were behind the pitot tube crashes, huh? ···

No, but I did work on the Lear 35 that cabin depressed and killed Payne Stewart. What I do now is Liaison Engineering. If they fuck something up like put the wings on upside down or bolt the empennage to the cockpit, I tell them how to fix it.--Α--йĨйƏҒỉйGƏЯş--Ω 20:22, 26 August 2009 (UTC)

I hope the "upside down" wing thing was just a joke. I'm not sure how the fuck you manage to put a 50 foot wing on upside down, unless you've never seen a plane before in your life. =/ ···

I was just kidding with that. You can't put wings on upside down. A plane only has 1 wing, which is rolled under the fuse and bolted in place with high shear shoulder bolts. If the wings were separate, they wouldn't have near the shear strength at the attach points. I suppose, in theory, you could bolt them on backwards but not upside down. Besides, if they were on upside down, all the fuel would run out ;).--Α--йĨйƏҒỉйGƏЯş--Ω 20:47, 26 August 2009 (UTC)

If you bolt your motherboard on upside down, nothing happens! :> ···

When ya dont know something google search is ftw... BLUE LAZERSEat It

Google it and find it out. --JaiGoesMonksassin

You knowm I was being sarcastic with the wings deal, but it does get every bit as stupid as that in reality. I once stopped them from doing about 1/2 a million dollars worth of warranty repair work on the environmental control system in a Learjet. They couldn't keep it from blowing hot air into the cabin. They were going to replace the whole system and I noticed the co-pilot had his jacket draped over the back of his crew seat, blocking off the cabin air sensor inlet. Remove the jacket, problem solved.--Α--йĨйƏҒỉйGƏЯş--Ω 17:24, 27 August 2009 (UTC)

If planes were idiot proof George Bush wouldn't have been able to get into Air Force One.--

Nothing is completely foolproof to a sufficiently talented fool. ---

Retrieved from "https://pvx.fandom.com/wiki/User_talk:Ininefingersi?oldid=951440"
Community content is available under CC-BY-NC-SA 2.5 unless otherwise noted.