suck it up babycakes, i got here furst --Angelus

That's thunda you shitter. l2ip. Also, if he wasn't using personal bias, he should've banned you for a week easy. Socking is one of the few things that's heavily frowned upon here. ··· Danny Pew Pew 20:14, October 7, 2009 (UTC)

That's not the point you idiot.--

He's temporarily back after a long hiatus. What'd the little bastard miss? --

omfg you just saved my ass thx soo much

Lol, don't worry about it. People are forgiving here if you're new and you're not doing anything malicious. Just try to familiarize yourself with the workings of PvX before you do too much more editting, and you'll stay out of trouble. Also, on talk pages you should always sign your name by adding four tildes (~~~~) to the end of your post. You can also just click on the third button from the right on the toolbar above the edit box (it should look like part of a signature). -- Jai 16:55, August 10, 2010 (UTC)

please i just want to poast the build i have no idea how to do that!

Is this build stupid joke?--God

No, you're just retarded. I was trying to help the person get his build in the right place on PvX, because he was trying to put it. I knew the build was going to get trashed, but I wanted the noob to at least get some good experience out of it and maybe learn something. But whatever, the PvXfags like you found it too quickly, and eventually Danny did turn it into a joke. I should have known better, but it doesn't really matter.
Lol, looking at the build today, I'm laughing even more. -- Jai 14:33, August 11, 2010 (UTC)

Jake already also reverted a revert, which iirc is what the rule says. Him saying 1RV and reverting actually seems like he thinks he can revert Jake for breaking RV1. I'd probably drop a whine about banning people who don't comprehend policy, but it's just 1 day and nobody cares. ---Chaos- (moo!) -- 19:36, August 15, 2010 (UTC)

(EC)Either way, Tahiri is more at fault than I am. I reverted once, then he reverted my edit (which, AFAIK, would be the first to break 1RV), and then I reverted his edit because I assumed he had made the edit in violation of a policy and was thus acceptable to remove. If I am misunderstanding the policy, then I think that would fall under ignorance, which I believe is generally not punished by bans. -- Jai 19:43, August 15, 2010 (UTC)

"I think reverting a revert is fine"

that to me is "you each get 1 revert" (but like i said, spirit vs word).
so...you broke 1RV because you thought it was OK to revert a policy violation of 1RV, that you were involved in...
That's not entirely true, we do ban for ignorance because we expect people to have read our policies (but i understand you're meaning in this context).
I will unban you on the condition that instead of getting back into a revert war, talk on the builds talk page =/. ~ PheNaxKian talk 19:48, August 15, 2010 (UTC)

Yeaaah, pretty sure people are confusing PvX and GWW policy here, but PvX policy has an extra clause "unless you are right". If you are wrong you get pretty fucked though. I don't even know what this is about, but that is how policy has always been interpreted. Misery 15:07, August 16, 2010 (UTC)

History says he only reverted once. You did twice. The original adding of the well tag does not count as a revert, obviously. ToraenTheJanitor

Also, this is kinda trumped anyway by Do not remove this tag from builds you authored unless a consensus has been reached on the talk page. ToraenTheJanitor

(EC)First of all, you removed the well tag from your own build (which in itself isn't allowed), you didn't revert his edit. We assumed good faith about the addition and removal of the well tag. You will note this in the exception clause of the 1RV policy. He reverted your removal of the well tag because "Stop being bad Jake" is a terrible reason. At that point, instead of bringing it up on the talk page because the well became contested, you reverted the reversion and committed 1RV. Anything not clear on why you should've listened to common sense?--Relyk talk 23:47, August 16, 2010 (UTC)

Ups. It might have had something to do with having reopened my browser while I was still editting the page. Probably didn't save the summary line, so it replaced the entire page with the section I was editting. Something like that. Sorry, and thanks for fixing it for me. -- Jai 19:53, August 30, 2010 (UTC)

stop vandalizing mesway, its there for people who dont have DPS or FoMF, capishe? The Scythe

We store builds here with the optimal skills. The assumption is that people are smart enough to realize that if they don't have DPS or FoMF, then they can add another rez. We try to give readers the benefit of the doubt. There's no reason for 4 optional rez skills. Karate

w/e feel free to remove teh bad shitz, i was listing pretty much everything that can work even a lil The Scythe

Wait, GWAMM is hard? Also, I thought everyone (who wasn't banned) has r9.... Karate

considering my first acc was banned, and my second is a R9 (1.5yr acc.) AND has a gwamm, id say im doin pretty decent. Also, gwamm isnt "hard" it just takes forever The Scythe

I think "religious scientists" is a perfect analogy about how rank just means you work hard. If diplomas would be awarded for getting PvE titles then they would be perfect for wiping your ass with, though I guess the paper will be about as cheap as the title ^__^ So ye ups. --DANDY ^_^ -- 17:30, August 31, 2010 (UTC)

A retard could play for 10,000 hours and get a couple GWAMM's, but that doesn't mean they're better at making builds than someone who's played for 1,000 hours and actually understands the game. Time means very little in terms of skill and intelligence. -- Jai 17:37, August 31, 2010 (UTC)

Wait, did Jai just write something I agree with? Karate

Believe it or not, I'm actually a pretty smart guy. I just have a tendency to make people dislike me on the internet, which basically makes all of my arguments pointless because people aren't listening. PvX is all about bandwagon, and I don't do bandwagon. -- Jai 17:43, August 31, 2010 (UTC)

(EC)1) i doubt it, your comments are always stupid. 2) dont talk about me like that The Scythe

for starters i dont trust u to be decent, 2 i only HA on the weekends (weekends, not double weekends) The Scythe

Crow, is it the weekend? o and no The Scythe

LOL turning down a top 10 GvG player for HA? Oh, the lulz. Karate

i kno who crow is KJ, troll a troll = raise the bar? The Scythe

Again, if you want to truly troll check out Iffy's or Ariyen's contribs. True trolling is a subtle and hilarious art. Karate

"Wait, you are calling Iffy subtle?"

Iffy's trolling was subtle, even if Iffy wasn't. Karate

He keeps saying that, but he's online now, so..... Karate

Why is this all on my talk page, exactly? Scythe is yet another nab that talks shit but can't do shit. Crow is a rare exception among braindead basement-dwellers. I don't see what's new. Now, I would normally request that everyone gtfo, but that would just attract the trolls like moths to a flame. So I guess I'm just gonna have to enjoy the rest of the show. Carry on, my fellow niggers. -- Jai 00:49, September 1, 2010 (UTC)

1v1 offer still on the table jai, lets see what u got The Scythe

@ KJ, i have fraps & camtasia, would be glad to.
@ Jai, so ur chickening out? mhmm whos the shit now?
also, has this 'conversation' ever been anything but trolling??? The Scythe

1v1 is highest form of pvp and we all love your shitty theorycrafts jai!--Relyk talk 21:25, September 1, 2010 (UTC)
Obviously you can't read Scythe, I'm not even going to bother responding to you anymore because you don't understand reasoning. And Relyk, Inoright? I'm obviously far better than anyone else at GW with my epic theorycrafts. -- Jai 21:31, September 1, 2010 (UTC)
Wait, you meant 1v1 sex, right? Karate

How dare you imply that Chaos is a homosexual! Chaos is a very straight male who enjoys only the manliest of activities and the sexiest of ladies. Karate

Honestly, using my quotes, you could probably justify just about any statement about my character. I believe that you could suggest that I'm a psychopath with psychotic delusions of genocides and riding dinosaurs rather easily. Karate

(Reset indent) Not that this applies to anyone here *cough* all of PvX, but the xkcd link reminded me that I wanted to show this off again :D

nowai! U FOUND JAI ON T3H INTERWEBZ The Scythe

try the heros, change the vote you dumb fuck. The Scythe 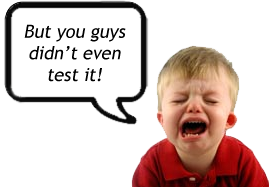 so make it ruptway so it sucks, right? also, "try it" implied you were wrong The Scythe

"Ruptway" uses two PI's. Also, "try it" has no worth at all on PvX. Again, you still haven't done anything to make me reconsider my vote. In fact, you're just reinforcing my assumptions that you have very little ability to reason, and aren't actually able to present a real argument. -- Jai 00:52, September 2, 2010 (UTC)

cba to explain 2 u The Scythe

My vote has valid reasoning. As it stands, I'm not going to change my vote, and no one is going to remove it because of the current policy on vote removal. So either convince me that I'm wrong or stop bitching about it. -- Jai 01:09, September 2, 2010 (UTC)
why in the hell would you link something that make you look like a total drama queen. You have child like arguments that just make people flame. Now you are doing it over a vote. Mesway needs work...simple. KJ made it better but it needs SYNERGY. Keep working on it.--XTREME 02:23, September 2, 2010 (UTC)

Oh, hey, I made that image. Karate

It's a Futurama quote. Karate

I'm a Futurama junkie. I own every season and movie, and I plan on getting the newest season as soon as it comes out. Karate

Parents are too cheap. Wouldn't watch hardly any TV even if we had it. I only really follow one show, and I don't even watch that every week. I'd rather play video games or do shit on teh internetz. -- Jai 16:36, September 2, 2010 (UTC)

So, there's no point in leaving him a message on his IP. It'll honestly just bug someone on one of the other wikia sites or one of our users. Karate

I understand that, but it would be good to get him to realize that his tardness isn't really doing anything. Chances are that IP isn't being used by anyone on Wikia anyway. But I get your reasoning anyway, and I won't take any more action. -- Jai 20:03, September 2, 2010 (UTC)

Honestly, if he were smart enough to realize that, he wouldn't be doing it in the first place. Karate

Scythe is banned for a week, so don't expect a quick response on your wall o' text. Karate

this feed is now about real trolling

this is precious: "Good night Enormous. This might be a good time to reflect on how fucking terrible your life is and why you're trolling a website that no one cares about.". Jaigoda quiting, hilarious, after feeding me for 2 hours, and causing the feed to cluster on his page... wat a bad wiki service , he should get a ban for troll feeding, maybe he's one of us, troll people... just think about this, he deletes all troled pages, how maniac is that???69.175.35.66 02:12, September 4, 2010 (UTC)enormous

Retrieved from "https://pvx.fandom.com/wiki/User_talk:Jaigoda?oldid=1113897"
Community content is available under CC-BY-NC-SA 2.5 unless otherwise noted.