if you want something deleted you need to either:

If you want to improve upon a build article, improve upon it, don't just rip it from said article and create a new page. Also if there is an issue with naming you can move the page with the "move" tab at the top of the page (next to edit). --Frosty

I don't know if you intended to, but if you are to use the assassin icon, please reupload it under a different name as it's a commonly used icon. I read you are wiki expirienced, so I'm not going to tell you how to. Ciao. Brandnew 12:32, April 28, 2010 (UTC)

Need to test the signature here too, and I will use the preview from now on. --

I know you are only trying to help, but builds are only supposed to have one Build Tag, at the moment you are putting Trial builds in the Trial section and Stub section which is incorrect (policy). Read up here if you don't understand what I mean. --Frosty

[1] That's actually a good reason to WELL a build, especially considering I'm the one who submitted it. It's also no longer in Testing, so no one should be voting on it, anyway. After the Mesmer update, it will also probably be even worse (the buffs to Ineptitude and Psychic Instability we're waiting for). ــѕт.мıкε 11:19, May 6, 2010 (UTC)

What happened to this build anyway? :D --Juze

Yeh but I meant with the ratings spam, everything posted at the same time with hundreds of alts? --Juze

No, when pvx moved to wikia all rating where automatically submitted again, at that date. It's that way with lot of ratings, look up some archived, old builds and you'll see ;) Brandnew 12:12, May 11, 2010 (UTC)

Deleted. Yes, I'm too lazy to post this to your user talk page. --Juze

CONSTRUCT THAT USERPAGE, GO ON, CONSTRUCT IT!!!!1!!

and stop copy/pasting other peoples votes. especially if they are retarded and dont know what theyre talking about.

I don't usually come on very much

learn to use it. Here's a few hints.

I'm not disputing its a terrible build but in future you shouldnt just call builds jokes when if you read the talk page you'll see he actually takes it seriously, it'll just make new players/users rage pvx and drive them to things like vandalism! thanks!--Steamy..x 15:58, June 1, 2010 (UTC)

Just a heads up, it's really more for immediate issues that require admin intervention, such as vandals or policy breaches. Run of the mill stuff like janitorial tasks don't need to be brought up there. ToraenTheJanitor

Your question on UW physway

Actually two things; firstly, was discussing how we could add even more DPS on the assassins, so we decided to go with Dodge This! replacing 3 SYs and replacing two BuH for the Dodge This also. You know, just to speed shit up.

And Prot Spirit is incase of strips, perhaps the ERs energy depletes or gets stripped of ER. Also in 4H quest you need to really stack on the strong prots; if Prot Bond is stripped (which is likely) PS is there to make sure he lives. Hope to see people using it more often. Minion

Symbolic Celerity got an update. Hence the attributes. ToraenTheJanitor

Ah, sorry. And I don't really have time to answer to every message. Juze

I herd you were butthurt 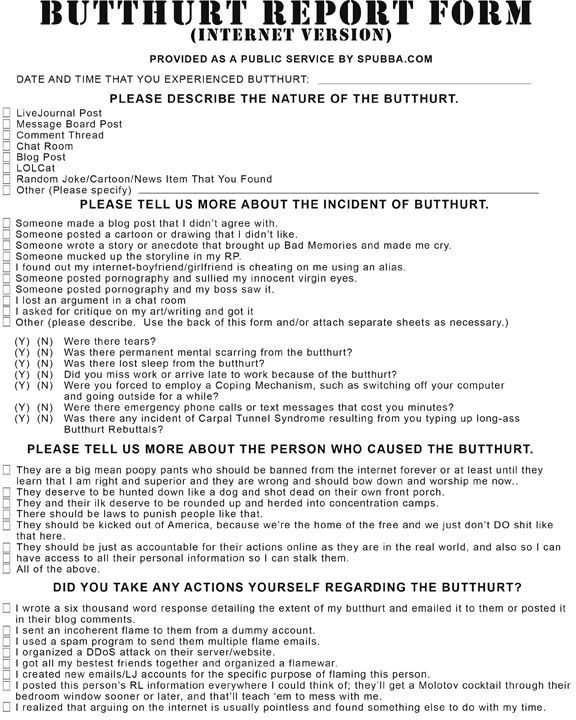 My talke page is not shared to talk beetween you two. o_O Juze

Then do it out of common courtesy and don't be spiteful? Heh.Minion

What is this? A some kind of a joke? Juze

It's not about that but I keep remembering new things to add. I do use preview button often. Kthxbai. Juze

It's PvX, learn to get used to people. Juze

You do realize KISS has proved itself to be one of the worst PvE guilds in the history of guildwars right? Stop being butthurt you little cunt--TahiriVeila 17:10, June 20, 2010 (UTC)

I can't leave it either though I'd love to. I've got Emilie there and she won't let me quit. Q_Q Juze

So i herd opposing an rfa cause you dont like the reason they opposed you is proof you are suffering from a severe case of butthurt.--Oskar 20:44, June 20, 2010 (UTC)

Hmm I remember a quote from Chaos, 'only popular and bad people get their talk pages filled fast' guess which one you are Juze :) Tyrael Strikes Back- 07:55, June 21, 2010 (UTC)

I thought it was frosty or maybe danny who said that and i thought it was "popular people and retards archive fast, guess which one you are?" or something like that...--Oskar 09:47, June 21, 2010 (UTC)

I used to be in [Claw] (Was a member there for 6 months), now I quit [KISS] for a week to learn SCs, I didn't oppose anyone, it was neutral. He's done good job but still not enough in my opinion. Juze

Yeah? That's what the universability what ever is for. Juze

Uhh what? You go there to farm ectos and the AFC does not affect Ecto drops. gg Juze. --

Juze you are such a clueless shitter. HM may get better drops with lockpicks, scrolls and tomes but NM is three times faster so you get same ammount of cash and three times more ectos. =/ --Iggy 's other account 17:37, June 23, 2010 (UTC)

Retrieved from "https://pvx.fandom.com/wiki/User_talk:Juze/Archive_1?oldid=1091131"
Community content is available under CC-BY-NC-SA 2.5 unless otherwise noted.