It would be more, but I must have deleted all my old shittery or something. I can't find my rage from when I made a Rt/A SS daggers build and freaked when people questioned it. So, that stuff must have been on one of my IP's or something. Karate

Sweet. I was pretty hardcore for a while. Being an admin does something to curve that, I guess. I rarely rage on shittery now. Although, I have banned like 5 people lately, and gave Docta a month for something small. Meh. Karate

Or all the work/personal shit I've been doing lately. I'm busy like 99% of the time now. I got a call at 2am from my staff trying to get me to come into work. I told them to fuck off and do their jobs. I think that kind of stuff makes me too tired to care about spouting off long rants of awesomeness like I used to. Karate

Isn't Docta Jenkins Thunda? That's what he told me. Karate

is rask. not thunda. it should be obvious since Docta Jenkins never talked about getting high and used the word nigger only half as much as thunda or any of thunda's socks. ··· Danny So Cute 05:50, 8 July 2010 (UTC)

i can't confirm either way, but when i was talking to KJ on MSN yesterday about Jenkins ban, i mentioned I thought it was rask, but KJ told me that it was definitely Thunda because he'd told him he was going to make the account before he made it. Apparently Rask is using some variation of his original account. ~ PheNaxKian talk 11:46, July 8, 2010 (UTC)

Thunda told me before the account was made that he was going to make an account named Docta Jenkins. I assumed it had something to do with his strange love for Biggles. And I thought Rask had some other account around here.
Meh, doesn't matter to me, honestly. Either way, either one of them shouldn't be vandal trolls w/o consequences. Karate

How? Here is KJ's carebear 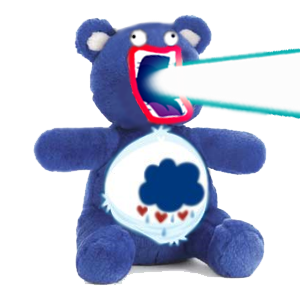 *Threats of permas. And there aren't many of those. Just the two currently against the whiny new user who "removed his build from PvX 'cuz we're not mature blah blah" and Rask/Thunda (w/e the fuck that is). Karate

No, you're too damn good. So damn good, in fact, that no one will be aware that you are trolling. I mostly meant the no-name guy and the idiots trying to troll him off-site. Karate

Heya, KJ. Haven't seen much of you at the official wiki. Hope all is well.

I generally create my own builds and I use PvX a lot to make sure I'm not doing something st00pid or failing to take advantage of something clever. However, I find it difficult to search for builds here. (Please let me know if I'm going about it the wrong way.) I wonder whether you might be interested in setting up some alternative search tools.

Here's some examples of where I run into trouble:

Hey, Tennessee. I'm doing fine. Just avoiding the wiki a little since the mass banning/trolling fest. I don't know if I can help on the first suggestion; however, on the second try something like this. If you use our advanced search and select "Builds", then you should be able to get similar results. Let me know if that's helpful. Karate

@KJ: glad you are well. Things seem calm now at GWW (then again, I wasn't around for the massiveness, so ... what do I know). So, the first choice on the link you provided was, this one, which is archived. Which is why I use Google. :-/

Anyhow, for the moment, I have something that works for me. OTOH, if you think figuring out how to ignore archived builds might be useful here, let's figure something out. I've mentioned the idea to Mendel, who can help (should we decide to go that route). Thanks for taking the time to respond.  —TEF (WTB: sig) 23:17, July 13, 2010 (UTC)

The first plan would be useful if we could hornswaggle it. A drastic alternative is just making another namespace for archived builds, since honestly, most of them will never come back to the meta. (if you guys like this plan, it can take off pretty easily).
Gcardinal had plans to allow searching for builds by attributes and specific skills, but never got around to putting it in before he lost interest. I doubt we could convince wikia to code it for us, although if we had the code on-hand they could probably copypaste it. -Auron 23:25, July 13, 2010 (UTC)

I know i havent been to the admin noticeboard but because this page applies to you, mind if you clean up some of the NPA's in shorty's comments? just dont see why they were made. http://pvx.wikia.com/wiki/Build_talk:R/any_PvE_Incendiary_Arrows_Ranger#Dracaena.27s_Vote --Pirate 22:01, July 13, 2010 (UTC)

We don't edit comments. We can remove them, but we rarely edit them. They've been warned (by the section I made). Trust me, if there is any more asshattery on that talk page, someone will take a break :D Karate

I wasn't involved or aware. I've moved on to botting other games and actually made it into an MW2 tournament recently. Also work has swallowed my life. ··· Danny So Cute 03:13, 14 July 2010 (UTC)

Retrieved from "https://pvx.fandom.com/wiki/User_talk:Karate_Jesus/Archive_21?oldid=1096176"
Community content is available under CC-BY-NC-SA 2.5 unless otherwise noted.