Hey, I haven't tried running Southern Shiverpeaks in a LONG time, and I have been developing an entirely theoretical Avatar of Dwayna running build specifically for that purpose. Since you seem to be the resident expert (or this at least appears to be your special area of interest), would you mind looking at the build and giving me some feedback? The build can be found at User:Defiant Elements/Sandbox. Thanks.

I'm deeply sorry but I couldn't keep my hand from releasing two new running builds on PvXwiki. My impatience wouldn't want to wait until the official vetting policy is properly implemented. Somehow the moving of my builds to the intended build page can't cope with the letter order on the build directory. It seems it's still under L from my userpage (Luobailong). Again, I'm deeply sorry for havn't hold out any longer but, therefore, the builds are, above the contents, well written, and well formated (at least I hope so).

This is kind of ironic, since I'm a cross country and distance track guy, that I'm having trouble running Droks. I use my ranger, and have all the equipment, but can't get past the second part. If there's anyway that you could show me, or provide more detailed instructions, or something of the sort that would be awesome. Oh, and another thing. Is droks still the most financially best run? Bluemilkman 18:48, 4 July 2007 (CEST)

You had said 'This build lacks the purpose to run most common high-level routes in Tyria that most other builds here on PvXwiki have.' That isn't actually correct. It is capable of running pretty much anywhere, especially the droks route. Why the slamming of a perfectly fine build? ~~ Napalm Flame ^_^

With all respect, but the Divine Wind Runner is far from being a perfectly fine build. See the discussion page of the article here, why I think this is the case.

Omg! Luobailong, I love you!!! All of your builds for running work amazaingly well! They have a special something to them that just makes them good. I'm currently trying to get the D/A running build you've done and I was wondering, how hard on a scale from 1 to 10 is it to finish the run? Anyways, like I said before, these builds are amazing! they've inspired me to make some of my own running builds =D. Your builds can't be beat, and I hope that you'll invent even more builds for running in the future =). Lyssan55 16:08, 12 August 2007 (CEST)

seconded. great job on running builds, glad to have someone like you active here. also, your sig code is massive heh —The preceding awesome-sauce comment was added by Skakid9090. 07:12, 16 August 2007 (CEST)

Took me quite some time until my signature turned the way it is now :D. Yay :D. —

It seems every build except for necromancers have a running build, so im trying to make on for necromancers...i dont know how well it works though =D If you could take a look that'd be fantasmicle. Tell me if anything seems amiss or not exactly right. I'd like to see what a master of running builds thinks of it. Lyssan55 22:47, 12 August 2007 (CEST)

Wouldn't it have something to do with Deadly Paradox no longer affecting stances? —ǥrɩɳsɧƿoɲ〚₮/ḉ〛 07:02, 15 August 2007 (CEST)

I don't remember it being archived, especially because there is a mirror build with the exact same name in the tested Running category. Paradox would have been a reason (as it doesn't half recharge times of Dark Escape anymore which was a somewhat brillant part of the build) but I think the community would have intervened. Hm ... —

Looking at the original build (Build:A/D Dark Shadow Forge Runner) on GWiki, the last revision before the wipe had "NOTE: The recent changes to the skill Deadly Paradox bring this build's viability into question. Please discuss on this article's talk page." The talk page had one or two people mention the nerf, but nobody talked about moving it to a new page with (archive) in the name, nor was the build moved on GuildWiki. Not sure when it got archived. Someone suggested bumping earth prayers down a pinch, raising wind to 6-8 and bringing featherfoot... not sure if that's still viable, I'll leave that for you guys to decide :P -Auron 12:09, 15 August 2007 (CEST)

That's odd. Someone must have created a mirror page for that build. When GWiki was closing its build doors maybe something got messed up and no one really cared. As the tested Build:A/D Dark Shadow Forge Runner still works (but could bear a little clean-up), I'd say that the archived mirror build is ready for deletion as it is the same article written by the same author(s), only that the non-archived version is a bit more up-to-date (Harrier's Haste), but not too much. —

Your vote on it was removed due to PvXwiki:Real Vetting briefly forbidding author votes. For the moment, the matter is undecided. Feel free to vote again on the build. --Edru viransu//QQ about me 05:17, 22 August 2007 (CEST)

I just tried the "Pious Aura Runner" build (N/D) (for Droks Run), but somehow I can't get further than a couple of meters ^^. Is there something wrong with the/my build or maybe you might help me out with this. Btw, I did NOT run that lot at all at the moment... But thanks to your build, there is now a way to do running with a nec, so I thought "give it a try"... Moreover, I'd really like to know, how exactly the armor has to be upgraded, though described in your build, I quite don't understand how to get +10 in all armor pieces and Radiation in all of them too ??!! Thanks in advance ;-) Alex

Hi, Alex. First of all the Pious Aura Runner is not my build but Lyssan55's. If you have really serious problems with removing hexes, then you might want to try a variant of the build with the Dervish Elite Vow of Silence and, thus, drop Aura of Lich. Do not forget to use a +20% longer Enchantments item, though - otherwise VoS won't last long enough. —

hey, it's me again....ummm alex ive answered your quesiton btw. Check my build's talk page. Also, Luobailong could you please put my build that you helped me with under the "Running Builds Where My Editing Played a Major Role" section? I feel as though without your help, it couldn't be where it is today and I deeply appreciate that. If you don't think that this is so, please explain to me why. thanks, Lyssan55 00:12, 24 August 2007 (CEST)

I am very honored Lyssan, but I cannot do that, as it is not my creation but yours. You yourself should create an own build userpage. ^.^ —

Thank you Luobailong and I understand how you feel about the build. But I dont think I have enough builds to make a userpage yet ^.^ once I've done more builds I may yet make a build userpage. Lyssan55 00:59, 25 August 2007 (CEST)

Hey Luobailong, it's me again ^.^ I've recently formed a build for running for Paragons. If you could take a look at it I would be quite greatful. Here's the link to the build: Build:P/Mo_Diverted_Godspeed_Runner Lyssan55 15:11, 25 August 2007 (CEST)

I see that you are a leet runner. I wish I was. I need to work on getting the ranger running build for droks so i can run my guildies through their. Got any tips? Also im gonna post my R/Any Basic Runner build on my user page. You mind takin a look at it sometime? im still workin on putting it up so it might be partly finished. --Hellbringer 03:02, 29 August 2007 (CEST) --EDIT-- Finished it. It is at the bottom. You can criticize it however, but don't think this build sucks balls. This was my first running build I ever made. --Hellbringer 03:19, 29 August 2007 (CEST)

To me, they look perfectly the same (exact same pixel dimensions with and without skill names). I'm using the newest version of Firefox (or I'm totally silly today). See screenshot below: 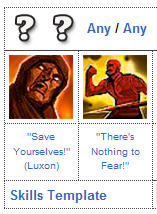 What browser are you guys using? Internet Explorer? And if yes, which version? —

Dunno what all the others are using, but at school i use IE6( cant get any better at school) and at home i got IE7, which causes the rest of the wiki to work exelente. Єяøהħ 16:35, 7 September 2007 (CEST)

IE has another problem with showing code correctly then. Damn Microsoft. :/ —

UUUmmm this is my first time ever posting period so i could use some help if you wouldnt mind. Ok time to get to the point i am a fellow runner i run Droknars, Shiverpeak tour, Kodash Bazaar (from sanctuary),From LA to Ascolon and back and now i have discovered a new run. I was gonna make my own page but as i'm to inexperienced and your D/A Droknars run build is very similar... i figured i would ask your help. As you may know with the release of EN the dungeon run HoS CR has become a popular party run. As ussually 8 people do it and most tend to die at least once maybe more during the run i count what i have done as a major acomplishement for myself. I found a build combo that allows me to solo the entire run from beggining to end and i was wondering if you would help me post.

If you would like to talk to me in person (or close to it) My screen name in game is "Seimos of Elona" and for anyone who wishes to talk to me you may add and pm me. I am not stingy with my builds any one who wants me to ping my build to them may ask and i will give it.

If you wish to e-mail me i can be reached at "nightfirechicken@yahoo.com"

Seimos, I think you will do fine posting your build here at PvXwiki. Here are the guidelines for posting a build: PvXwiki:Style and formatting. It is also very helpful to view the edit page of other builds that you may like and that are already vetted upon in order to copy and paste the formatting into your build to help you editing it quicker. —

Fine so far, we are growing rapidly hitting 50 members. Visit us from time to time on Sword of Laban or have a good look at our new GWW Guild site. —

i will, i miss everyone and between trying to stay active and beat NF, i haven't had much time to do anything else, all i've been able to do is post on here lol and thats a couple days when i can spare lol. Once you turn "pro" at running everyone wants you lol, semi bad for me tho, cause i do guildie/alliance runs for free lol. Riff 07:07, 10 October 2007 (CEST)

I was browsing through the Dervish EotN skills a while ago, and this skill popped up. [1] I've observed in some GvGs where a team would have Monk runners using Holy Veil, Protective Spirit, and maybe some other Enchantments (Although there isn't much difference, just 3% =P)Perhaps this can be used in PvE running also? What do you think? Sshaun007 15:18, 14 October 2007 (CEST)

Yes, the Signet of Mystic Speed is no bad skill, and costs nothing to cast. It will find its place in PvE Running builds, too, sooner or later. —

Didn't even know they were still there. Thanks so far. ^.^ —

You are the running build expert of PvXwiki so I was wondering if you have any suggestions or advice for this build. Thanks. :D

Did you by chance come back to guild wars? Invincible Rogue

Retrieved from "https://pvx.fandom.com/wiki/User_talk:Luobailong?oldid=761456"
Community content is available under CC-BY-NC-SA 2.5 unless otherwise noted.