It was marked as tested for a long time, and therefore, should be archived. I do not believe it is a good build either, but it is standard procedure. — Rapta

Then I would say it was just a time of minimal attention, that allowed the build to be put in the good category. Procedure is sort of a weak reason to keep bad builds. -Shen 16:21, 8 February 2008 (EST)

One could say that a lot of the builds we archived were bad. However, since you're saying that from a perspective from post-EotN in comparision to a perspective from when the build was initially written, the judgment is already flawed. It was vetted with a "tested" rating, and the transferred into a "good" rating on the current system. As such, it should be archived. — Rapta

I don't see how perspective applies here. You yourself knew it was bad, and PvX allowed it to filter through. I must be missing something. -Shen 17:38, 8 February 2008 (EST)

Others thought it was good. It's not solely based on the perspective of one person. It was vetted (albiet twice) as a good build, and it will be treated as such. — Rapta

That it was vetted favorably is irrelevant. You mark all builds as mystifying by saying an incorrect representation of abilities qualifies the build as worthy of archive. I'll leave it archived, I just don't see the logic though. -Shen 17:46, 8 February 2008 (EST)

The fact that it was vetted favorably for a long period of time makes it a build that should be archived. That is all, and not much more to it. It has nothing to do with "me marking all builds as mystifying". Not that that statement has any meaning to it, or anything. — Rapta

Archiving implies the build once worked, which is clearly not the case, as evidenced by the number of invalid votes removed. No, the question is, does Real Vetting end after a build has been categorized? Absolutely not. Of course, a build may be considered "outdated", but considering how it fails to meet even a minimum threshold of effectiveness, that doesn't apply. -Shen 09:40, 9 February 2008 (EST)

I talked to Scottie and he made it clear deleting the build creates more trouble than archiving. -Shen 11:45, 9 February 2008 (EST)

That's another part of why we archive specific builds. — Rapta

I feel special because a "Why we Fail" link links to my user talk.

I wasn't talking about recharge, I meant with Sun and Moon, it's a more or less instantly recharged D-slash. Then, it's certainly less dependent. Granted, I probably should have elaborated, but you need to modify your vote, as Sun and Moon is the very obvious choice, and Whirlwind isn't even in the bar. -Shen 14:18, 12 February 2008 (EST)

That's not what the build says. — Rapta

I'm aware, I'm just suggesting that the one with Sun Moon is clearly superior, and the addition of SY is major, but still a completely viable variant to the better one. Would you agree? -Shen 14:11, 13 February 2008 (EST)

After tons of wasted faction getting Creme Brulees, and Firewater: 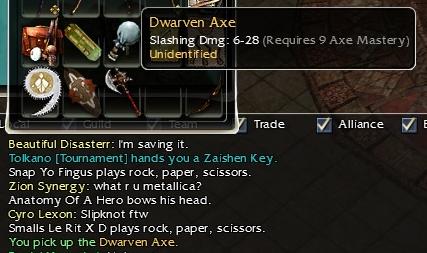 Also, in before "wtf, a monk insignia". — Rapta

The point is, that I got a usable item. — Rapta

I don't understand those RV's tbh. Why wouldn't you want to qlock (besides being fucking retarded)? Frenzy speeds up the spike immensely. There is simply no reason not to do so (besides being overtly bad). Mind explaining? --Readem 01:50, 24 February 2008 (EST)

I don't see the reason behind this rerevert, tbh. Running Echarge instead of Rush means no cancel stance means less frenzy means red bars don't go down as much. — Edru/QQ 02:02, 24 February 2008 (EST)

All of the best warriors don't use rush. It cannot be used as a reliable speed buff, and cannot double flag in times of need. If you honestly need rush, then you are simply not switching targets often enough. Drop echarge completely. It is simply terrible :/. --Readem 02:06, 24 February 2008 (EST)

I removed it because it's too general for a build-specific page, and would be better suited for a guide. Also, note that Exec Strike does not always have to be used after eviscerate. — Rapta

Unless evisc decided to do the same as that other skill that applies damage after deep wound, you do if you want spikes/kills. -- Armond Warblade

Not really. If you've two warriors spiking a block-less prot-less target(or you're otherwise guaranteed to hit with the evis), only one of them really needs to start with evis. More damage quicker if one starts with evis and the other starts with exec. — Edru/QQ 20:59, 25 February 2008 (EST)
Edru beat me to it. Also, a keen eye on obs would notice that as well. — Rapta

In GvG you should be unloading on rec (or at least spiking as often as possible). The great thing about eviscerate, is that both warriors don't need to spike. It adds more than enough DPS. (also, who is running dual evis atm? other than rawr?) --Readem 22:19, 25 February 2008 (EST)

You don't have to be running dual Eviscerate. — Rapta

You remove a lot of red links. Makes it hard for me to see what was deleted. -- Armond Warblade

With the recent update? Your tagging a ton of builds for archival... I know, it sucks some serious nuts. --

Pay less attention to the "might be archived" part and more to the "possibly inaccurate information" part. — Rapta

Wuv that. Sais so on about all builds. Godbox

Wow. They actually have a policy on that. — Rapta

It's as per consistency with the Siphon Speed nerf, those builds that function with Siphon Speed are archived. Should additional users request it be unarchived, it will be done so. In which case, it will probably just be voted down and archived/deleted anyways. — Rapta

Why would anyone want to be an admin? —ǥrɩɳsɧƴɖɩđđɭɘş

But we can't let Rapta be admin, he's corrupt and will screw up the wiki! CONSPIRACY MAN! :O --

Take a look at this. I've seen you having a few issues with archiving vs. deletion, and I made this to help. --

I'd like to have a way to generate focused discussion regarding certain builds affected by an update/nerf. I've been trying to get some discussion started on the Community Portal talk page, but with no luck, as people prefer to just jump onto random pages and scream "NERFED!" and look away. It would be nice to have sort of a "progress tracker" or something, with admins, BM's, or just regular contributors going around and reporting anything they see on the talk page. It's mostly a problem with disorganization, rather than policy. — Rapta

Still, I've seen debates on whether things like Other builds should be archived or trashed. This covers it. --

There should be no preset condition. Builds that are around for a significant amount of time or were around for a short period but had a large impact (ie, actually causing the nerf(s) to the skills) should be archived. Common sense, really. Not that I expect too much of that from the overall community. Use of policy is not practical in dealing with build archival, as far as I see it. — Rapta

The closest thing I can find to it is stunning fury, and because somone changed the Spearchucker its similar to it- If somone hadn't changed the spearchucker it would have been almost totally different. --Warwick (Talk) (Contr.) 12:42, 11 March 2008 (EDT)

There you go then. — Rapta

For updating my userpage.

Retrieved from "https://pvx.fandom.com/wiki/User_talk:Rapta/Archive_8?oldid=833579"
Community content is available under CC-BY-NC-SA 2.5 unless otherwise noted.