Needs a ritualist casting warmongers on it :O --Ikimono "...And my axe!"

I was bored so wanted to find out the highest heal possible xD. I used the following builds (most of my heroes didnt have sup runes so Im sure ppl can do higher ^^). With another team mate 10k+ would be easy xD. Maybe a warrior with defy pain and endure pain as the infuser lol.

Yes he can, but unless his reasoning is valid and based on the facts then it will be removed again. Spaggage talk 01:26, November 3, 2009 (UTC) 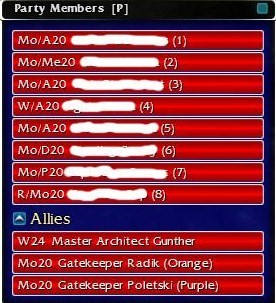 Weee made my own guild today

Not sure about where your from but in Australia STDs are called STIs (Sexually Trasmitted Infection), pretty funny because there are alot of adds on buses and such about STIs. "It would feel like you're peeing razor blades" is one of them. Otherwise cool name lol.Consitini 01:58, November 21, 2009 (UTC)

So umm I decided to death level my perma-pre and went down to make meself a coffee. When I came back this is what I saw lol.

Retrieved from "https://pvx.fandom.com/wiki/User_talk:Ritz1337?oldid=998813"
Community content is available under CC-BY-NC-SA 2.5 unless otherwise noted.