IM? dirty dub is the best when youre high, uk hardcore when youre wrecked and trance for acid, daft punk goes amazingly with everything though Rawrawr Dinosaur 20:35, April 25, 2010 (UTC)

i have my ways, listen to this http://www.youtube.com/watch?v=W5WxZNIpszs when youre wrecked and it actually messes with your brain. Its fake dubstep but that doesnt matter in a state :D Rawrawr Dinosaur 20:39, April 25, 2010 (UTC)

I presume you would do what you do with sigs. [[Image:lolcakes.jpg|60px]] for example (idk if lolcakes is a picture or not). --Frosty

I didn't get admin for nothing (well, maybe). --Frosty

Now where should i put this..

I do not condone calling people Autistic, unless they choose to be called it. --Frosty

Ign? and i have very limited HA experience but apparently im a pretty good OoS according to chris who is like r13 or something ridiculous like that --Steamy..x 21:04, April 27, 2010 (UTC)

So was the paedophile who raped me. --Frosty

Some people from tF including myself decided that we cant be bothered with all the bad players and shitters in it. k. one guy decided he'd make his own guild and alot of people from tF followed him. we're like 4/8 on the core (although backline is coming after mAT so 6/8 really) need ranger who can also play front/midline roles and a mesmer who can also play other midline roles and maybe frontline roles. In general primary ranger and mesmer who are flexible. tF was usually around the 200-300 mark but it did get top 100 like twice for decent periods of time, so we're not awful not we're not exactly the cream of the crop. if you want to take one of these slots just leave pm and we'll try you out in smurf (or main guild for now as its rank n/a atm wat) --Steamy..x 21:13, May 17, 2010 (UTC) 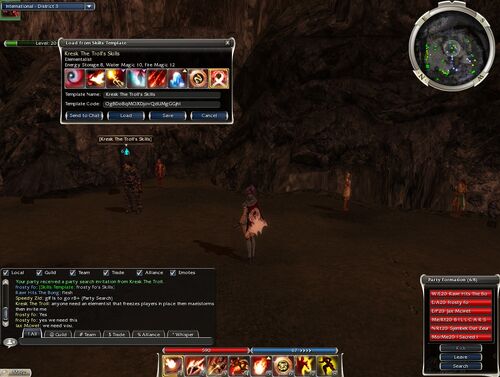 I do hope that's not sarcasm I'm detecting! ToraenTheJanitor

Sarcasm? Why, I simply can't believe you would suggest that I am guilty of such a heinous crime commited in gilworz, the most serious wor you will ever see! --Steamy..x 22:04, May 19, 2010 (UTC)

this is why I have no faith in you

You claim to know about honour, yet you don't even know what eprod is, son, i am disappoint. --Frosty

I'm very well aware of who IWAY is, seeing as I have a guest invite to them in this moment and several times in the past. And the answer would be Furious Dragons Reign. Atleast according to the one I asked. Kurtan 16:52, 24 May 2010 (UTC)

Thanks, im not looking to join IWAY or anything, im a euro, it was just my friends guild recently left GG ally and theyre looking for a US ally and saint said i should try and find out what ally IWAY was in :> --Steamy..x 15:17, May 25, 2010 (UTC)

Hey jax, I heard you like Dicks, so I got you one.

You just messed up redirects and newest articles. >:( Juze

Yea good work on the pages. User:Steamy Igloo/etc etc , not hard. Also GG went 10-0 and pretty much dominated the mAT, it was a good final vs MSH (DirT) though, they ran Dual Para and came pretty close to winning, if their flagger got back to the prot in time they would have won the game. Also LAME went 2-4 lol. --Frosty

How's the weather down in wherever you are nig?--Schoko Ze Germun

Stop that mess!! You are still messing them up with User/ instead of User: >:( Juze

And messed up redirects even more, should be blocked for that. Juze

Read all the PvX policies please. I have hard time moving all your pages because there's a limit you can move in a short time too. Now Frosty's got a lot to delete. Juze

Hmm. Your guild sucks and you should join mine because our name mocks the irish and i need more people for it. Atm its like er. Me. Dandy. KJ is joining at some point, hamster is joining at some point and conny might. Hamster got his old guild into [srs] ally before so he should be able to get this one into it. Hopefully anyway.. --Steamy..x 14:49, May 30, 2010 (UTC)

I just don't get the jokes about irish tbh...--Schoko Ze Germun

Your vote on Build:Me/any Psychic Instability

I have a few objections against your vote, 1: PI KD's for 4 seconds, erf shakur only for 3, 2: thanks to r12 FC PI recharges in approximatly 7,68 seconds, which is not really much slower than you can charge ES while under "FGJ!", 3: ES is only adjacent while PI KD's in nearby rangee, 4: mesmers have illusion/dom utility and wars have good damage, so that balances that out, to summarise: I think you voted a bit low

Ye but still, include magehunter strike to your elite section, it's almost as manly as decapitate, sth like this--Schoko Ze Germun

Schoko such a baddy :) --Frosty

This was not made for RA you fgt, if RA, drop sprint for Dash and bring Res sig.--Schoko Ze Germun

40 second recharge =p builds like that go in your sandbox 1 sec i'll put one on your userpage, just click the link and shove builds in it but dont add tags like trial/testing/stub to them obviously--Steamy..x 13:14, June 1, 2010 (UTC)

Did you actually read the skills? 1 spike every 15 seconds :p --Schoko Ze Germun

Wat, we ran this in HA yesterday, was pretty funny tbh, only problem is, you don't really kill R-Spike--Schoko Ze Germun

Retrieved from "https://pvx.fandom.com/wiki/User_talk:Steamy_Igloo/Archive_3?oldid=1091305"
Community content is available under CC-BY-NC-SA 2.5 unless otherwise noted.