Thought I'd be sociable

Hey XD I looked on your guildwiki page, LOVE your thumper dervish build. VERY powerful. My guild were shocked when I annihilated them with it Napalm Flame 12:35, 7 May 2007 (CEST)

Good idea, I also tried your build with Melandru, even though it got nerfed. Energy was a tight squeeze to manage, but I ended up using the energy gain enchantment which I've forgotten the name of. The guild leader, running a blinding air E/D just couldn't beat it.

It's weird though that some of the attacks are melee attacks and don't require a specific weapon to use. I'd bet any money an assassin's build is gonna someday come out with mystic sweep and crit strikes. hmm... I'm tempted to try that. Napalm Flame 12:44, 7 May 2007 (CEST)

Meh Eles don't need damage from a scythe. Works decent on dervishes wielding non-dervish weapons due to recharge and activation time and the fact that dervishes are often enchanted. Swiftslash 14:14, 7 May 2007 (CEST)

This is rather weak though since it's only hexes. An ele or derv with the same amount of attb pts... Well GG. Swiftslash \\

Exactly, some more varied hexes which affects anyone and then anyone is screwed. And eles or dervs with that many points is just fkin crazy. Prot spirit, here we go! *glares at 55 monks* as long as there is ench removal somewhere we are safe. Napalm Flame 22:23, 9 May 2007 (CEST)

How about a nuker?

Or just <pvxbig>[searing flames@99999999999]</pvxbig> For a decent long burning. I should stop playing around with builds here and move 'em to ideas... People might get trouble loading :P Swiftslash \\

I use the same build, almost exactly the same, except I just use bloodsong instead of natural stride as that means I don't have to sacrifice. Way to go spike team! '~\^/~' Napalm Flame

I run all kinds of variants on it. Natrual stride just adds some extra blocking. Good fun, good fun Swiftslash \\

Aye I do :P Gotta love the Cox. Oh wait, scratch that. Swiftslash \\

Your mom is puke, kthx? Swiftslash \\

I've taken true to some of your critiquing on the Scythe Spammer build. It is true what it lacks, so I have removed the RA tag since it can't be self sufficient, but relies on other teammates to augment the damage. Perhaps you can re-evaluate your rating in the future since it's no longer in the RA, and thus some of its limitations can be covered by teammates. Thanks for bothering to rate it nonetheless. Paragon City 09:19, 29 October 2007 (CET)

My reasons still stand, whether it's RA or TA. Swiftslash \\

Maybe. Feel bad against my friend who's running my guild but on the other hand we DO have an ugly cape. :O Swiftslash \\

I like bunnies. And yeah I'll PM whenever I'm on which is not now cos I'm going to bed. I got work tomorrow >.< Swiftslash \\

Blazing Spear was added for more damage, and the adrenalin is put to use. The attacks aren't bad, you apply burning, DPS, and DW plus conjure flame.--

Isn't there some kind of policy against going to ppls userpages to post comments about votes? Either way I still think attacks are bad and you're not abusing the massive adren gain you get. Swiftslash \\

first of all, it doesn't show. Second tanks suck in PvP. Period. No wait, third, why are you asking me? there are guides on this site for that. Swiftslash \\

saying Heal as One is a bad elite is an opinion, saying earth tanks are bad pve is a fact. Swiftslash \\

You said he's inactive, that's because he's banned 3/4 of the time lolol. He's still active on GW and stuff. -

being banned 3/4 of the time as a BM is bad, so vote is valid. I know he's active on GW, since I'm in Zeus but that's not a valid point for being BM. Swiftslash \\

Just a small error: Corrupt Enchantment is a hex, not an enchantment. I'm pretty sure you typo'd that one =P --

AHHHH wtb sleep, why does my sis have to wake me up so early >.>.

U got pwnt tbh.

Can you update your rating discription to reflect the fact that whirlwind does not suffer the PBAoE aftercast? It's one of the few that aren't 1.75 seconds. Your point about the 3/4 second cast time remains valid. Thanks.

I figured you might like this. Go to your sandbox. Then, copy and paste this code into the address bar while on that page:

It should turn all your pictures into a big 3d spinning halo like: 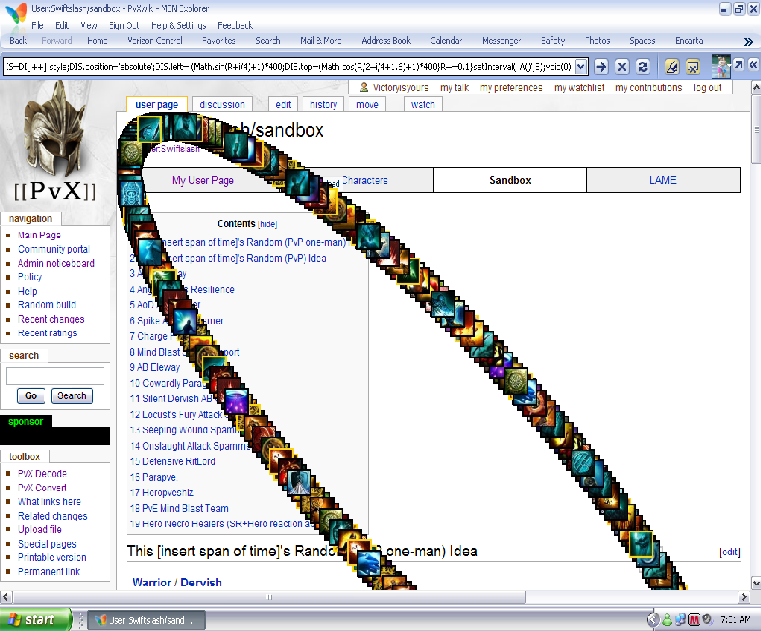 Nope they just went like (skill)+blackbox on all skillbars. Swiftslash \\

Valentines, gf in bed waiting for me, noty. Swiftslash \\

She was brushing her teeth and had just gone to bed when I wrote it down and shut off the comp tbh. Swiftslash \\

Can you please revote on this build because the attributes and profession has been changed.

Runes was only a minor part of my vote. Swiftslash \\

Tried to make it a bit less joke-like, cleaned up the bar a bit and such. Care to revote, or suggest stuff if it still sucks? No hard feelings if you leave it be. -StarSeeker | My talk 11:25, 9 April 2008 (EDT)

U added a vote there a long time ago i fixed the build a bit, so if u want to reconsider your vote :) Massive

deleted it for now, will revote when I have the time. Swiftslash \\

State your reasons for A-echo being a waste. Echoing one of the most annoying hexes in the game and maintaining them on 4 chars owns. Jebus

Retrieved from "https://pvx.fandom.com/wiki/User_talk:Swiftslash?oldid=974633"
Community content is available under CC-BY-NC-SA 2.5 unless otherwise noted.