I'm drunk and i wanna kill this fucking guy for being an anoying fuck http://pvx.wikia.com/wiki/Build_talk:Team_-_HA_Arcane_Hexway Kyhzna Faikun 21:27, 31 December 2008 (EST)

"Healing derived from enchantments (such as Dwayna's Sorrow) is not normally increased." nothing for sure though, and i cba ingame

I was first tbfh ;o

ty <3 is it really that simple? wow i fail

18:01, 7 January 2009
actually it got inturupted when i wasdoing it, and you added an extra comma that made it look weir so i fixed and centered. owned.*Un*ɖɩđđɭɘş —ɱƈ^Ŗęąḻ^ḻƴƿʃooƿʂ

I centred it, you removed a comma, tbh

gonna have to go with frosty on this one

I say you guys have a pissing match to decide who did it first. I'll judge/jerk off.

Tai, you want me to see if I can resize your sig?

And how the hell do you do your time/date like that? I've wanted to be able to do that forever.

and you fail at grammar tbh, too not to --

32 bit supports upto 4 gigs of RAM. However, Windows reserves 976 Mb of RAM for MMIO, thus you only have 3 gigs of usable RAM. Not that you'd need more than that, anyhow. and if you "only" put 3 Gigs in it, it will use a part of the 3 gigs for MMIO, so having 4 gigs is not redundant. --›

I have 32bit with 4 Gigs myself :) I didn't feel the need for 64bit, and it would prevent me from playing Nethack (which is awesome. The only graphics it has is ASCII, it's funnier than Portal and harder than <insert hard game here>). --›

Afaik, 64bit only should have trouble with 16bit programs o-o (theoretically, of course! It's still Windows). So, it's PS Elements, not your OS :P --›

basicly, i want some moneys, can anyone give me a hand in choosing my top 8 for the xunlai tournament house? thx --

yetiamchosen: So the only part about this curse of recruiting potentials for the marine corps that isn't utterly miserable is fucking with the people that have already signed up. Now, we don't want to scare them off entirely, so we can't just sit there and be like, "You're going to die in bootcamp!" But we can be completely insane with each other in front of them, and let them draw that conclusion on their own. So we're told to take the poolees on a 1.5 mile run today. No staff nco's there, so we're like, "Fuckit. There's two recruits, there's eight of us ... four mile run." So we start running and I had just had a monster energy drink, the lo ball kind, which is red. That's a dumbass's recipe for disaster, but I really wanted one so I had one anyway. It dehydrates you, gives you cramps, and makes you puke. So we've been running like half a mile and without breaking pace I casually puke onto the side of the road, and keep running. Among marines this is normal behavior, so no one even says anything, but the recuruit is looking like, "Wtf, did that guy just puke without stopping?"

yetiamchosen: And he's like, "Dude! Are you alright!" I'm like, "KEEP RUNNING!" and I speed up a little bit, chuckling inside. And then it really hits me and I'm like, going full speed, just hurling all over the side of the road, wiping my mouth, running, hurling and he looks at the puke and he goes, "OH MY GOD ARE YOU PUKING BLOOD!"

yetiamchosen: And I go, "THAT'S NOT BLOOD IT'S CONFIDENCE AAAAGGGHHHHH!!!" And I just blast off like a little red streaming rocket ship. I look behind me and this kid seriously look like he's just about to piss his pants, like, "Oh my god, what the fuck have I gotten myself into?" I got up to the front and this marine looks at me and goes, "Were you really puking up blood?" I'm like, "No devil, it's monster," and he just laughs, he's like, "You're going to hell."

yetiamchosen: That's it. I was chuckling inside all the way home.

geekryan: that really is awesome

geekryan: I can't imagine how freaked out that recruit was

yetiamchosen: I hope he doesn't sleep well again until he gets to boot camp.

I did give actual reasoning --

no, u just said that ppl should stop putting any elite on such a bar and call it a turret >_> such a bar is called a turret, fyi InfestedHydralisk

Does Coward? No, because they aren't kiting from nothing. - Misery Is Friendly

I use it to solo farm DoA. - Misery Is Friendly

Misery can solo DoA with no skills.

players keep moving around a bit all the time tbh InfestedHydralisk

yeah, i got the idea from you, but surprisingly the only thing i ripped from yours was the curvy borders :) --

The one i tagged as a joke was a different one than that one you linked, if that's what you're getting at --

hey, next time let me know if you want to RfA me. Not that I'm upset or anything, but I knew what happened would happen (so there was no point in it). Thanks for thinking I'm not an asshole though. You're one of the chosen few. Lol.

Yes, I have a beard....and men with beards are always assholes. Look at that Dos Equis advertising guy. He's the a-hole alive. Also, what's logic?

yeah, i thought you would do a good job at least :( sorry bout that though --

(late response). Eh, don't worry about it. Thanks for thinking I'd do a good job.

I'd still prefer the other r/d. you have no hex removal on yours --

"needs more experience around the wiki"

ive been here longer than u have, and i have about the same # of constructive contribs as wiz when he was made admin. If you count all the moving builds, abandoned tag placing, and image tagging, i have about twice as much. :3 Jebus

who cares how long I've been here? I'm not the one being RfAd --

a new name, I really haven't liked this one for a while. So far I've been thinking of Star (after my sin), but I really don't know. any suggestions? (if you're just gonna flame, gtfo please) --

Star of Exile? You did that for freaking ages till someone (possibly me) raged at you. -

Call yourself Mont Senor....that's what I would change my name to.

Mont Señor is just a spanish title. Something you would say to your boss if you were a house servant. Fry from futurama pronounces it w/o the tilde and it's hilarious.

Just copy and past it or you can download a spanish font. And Chaos, I live in the US but on the border of Mexico where they speak shit Tex-Mex. I only speak english fluently, but I can get my point across in spanish and I can read Greek but suck at speaking it.

Close, but you don't need the "he", espanñol is spelled español and desde would be best subbed with por unless you were trying to get across the idea that you've spoken spanish since you were 5 years old, in which case the whole sentence is wrong.

the double n was a typo, and yes you do need the "he" because it's "I have spoken." maybe i meant desde hace instead of desde. --

he is only needed in the formal sense, like if you were addressing a boss or someone who is on a higher social rung than you. In conversational spanish, you don't need it. Also, were you trying to say that you'd spoken spanish since you were 5 years old? Or that you've spoken spanish for 5 years? If you meant the former, then the structure was incorrect. If you meant the latter, then you don't need desde

I meant for five years. my bad, i need notes when doing homework :) --

ok then :) I could have sword we learned some construction with desde (and maybe hace) somewhere along the ling. --

Cingular Star - also I am guessing you are going to change during the switch to wikia?

Already saw it now, but thanks anyway.

Ups, Fry uses the title Monsignor. He's quoting a physicist (holy shit that show has a lot of subtleties). I kinda want that to be my name now tbh. Which is better? Karate Jesus or Monsignor? Or should I think of a new one?

Derived from the French, Mon Seigneur = my lord. Unless you want people sucking your cock by looking at your name, go with KJ.

Lol, I know what it means. It's a quote from futurama (who were quoting a movie) and spelled the way I spelled it, it's actually a title for a member of the Catholic clergy. Anyway....what about Death Rabbit? Also from Frisky Dingo.

(EC ×2)Lol, idk. I'll probably leave it the same, but if I changed it I could have a badass pic in my sig. 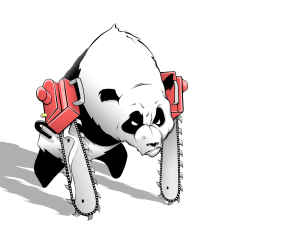 This is what I mean by Death Rabbits 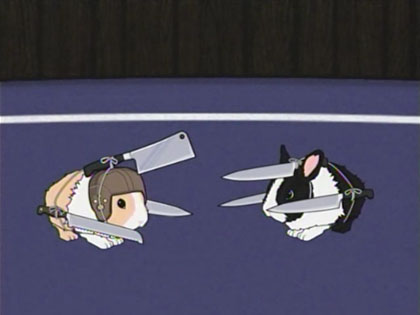 They'll fuck you up.

Not positive how, just do Special:Contributions/Imperial? --

Either that, or check for a user/talk page. Most peeps get welcomed (except me, sniffle)

I don't see one. Whatever, I'll keep thinking for a name. Still open to ideas. --

It actually leaves a space, although somewhat unnoticeable. --—The preceding trolling attempt was made by Chaos (talk) . 14:41, 18 February 2009 (EST)

To sum things up, you epic fail at indenting. GG

It actually leaves a space, although somewhat unnoticeable --

No, i'm just informing you of the common style in which discussions flow on PvX. No need to rage --

I laugh at your sig then --

Retrieved from "https://pvx.fandom.com/wiki/User_talk:Tai/Archive_2?oldid=833708"
Community content is available under CC-BY-NC-SA 2.5 unless otherwise noted.