You just don't seem to get it. All we ask is that you follow a few simple rules. I would highly recommend that you read in full all of the following before continuing to contribute: PvXwiki:No personal attacks; PvXwiki:Disruption; PvXwiki:Editing User and Talk Pages; PvXwiki:Article Ownership; and PvXwiki:Only revert once. If you continue to violate these, I can and will ban you for however long I see fit – but if you just follow the rules, you won't have any problems. If you have questions about any of these policies, ask. ¬ Wizårdbõÿ777(sysop) 20:54, 6 March 2008 (EST)

Do you think i really care if you ban me? You don't scare me one bit....I have better things to do then listen to idiots try and act tough on PvXwiki..so plz ban me all you want.. jack ass

Dude your userpage is...organized! o.O I wanna rejoin the guild but ur never on.

Just fyi, you can use the {{clear}} template to help with formatting. It basically starts a new line at the next line that doesn't have anything on it. It's helpful with things like userboxes. since they take up several lines and often vary in size.

This is text after the userbox, but it shows up wrong - it's not on the next line.

So, by adding in clear templates, you can format it better:

This is text after the userbox, and it shows up right.

Lol no its ftw tho Thunda

Seeping wound is 4 degen, max. It's like, ohnoes i can counter it with mending. Also, you don't even need hex removal to make it ineffective. There are much better elite choices. ¬ Wizårdbõÿ777(sysop) 22:36, 12 April 2008 (EDT)

Lol it be a joke Thunda

wtf? what do you mean steels username? in gw or pvx..and no u weren't kicked Thunda

IDC ABOUT A WTF? CHAIN.....and his username is "Steel The Assassin" Thunda

wtf its his userpage..now how do i link to it..... ok when you go to edit talk page on the bottom is a thing that says templates used on this page..his name will be there Thunda

I don't even think he logs on it ever...he just wikis builds(then most of the time he changes a skill and calls it "original) Thunda

Mayb....and i rated that a long time ago..like when you first made it.. Thunda

Yea first time I tried it with some PUG and it worked brilliantly. Next I try it with you and steel and some random guildie and it FAILS COMPLETELY. Lol but steel was monking >_> and u guys wouldn't even use the exact builds and stuff. But yeah it was a pretty 1337 pug. And now its changed for the better.-Jax010 22:50, 7 May 2008 (EDT)

fuck you i'm beastly at TA..like you said steel was monking..thats why we lost..and skrew exact builds..doesn't make much of a difference..thats wut variants section iz 4 Thunda

o and why dontcha put ur build on featured

wtf ur noob build has 3 votes by friends..well 2 by friends and 1 by urself...and 2 random ppl... not really "great" yet Thunda

almost all the builds i posted were jokes..except the SoI pve mes..and idk what happend to that..one day it was just deleted w/ no template for deletion or anything..don't know..so stfu Thunda

ugh so now ur gonna be back...jkjkjk lol Thunda

Rap that some friends made about me

One guy is beatboxing and one guy is rapping. It goes like this:

His name rhymes with CHIN

His favourite nationality is ASIAN

His sweatshirt is BLACK

His girl is WHACK

He's in love with this puny CHICK (True)

Her name is BRIDGET (Untrue)

And this rap is still LEGIT.

Well my Asian name is "Zhepeng" and alot of people call me that cuz they think its cool, but they cant pronounce it anyways o.O. Sometimes it comes out "Shebang" instead which makes things awkward.-Jax010 20:39, 6 June 2008 (EDT)

ur sped class hw? gl.. and u upload images by clicking the upload image file sry button under the search bar...retard

nah GoD it isn't..but i like to call jax a retard cuz its fun

>.> wth is with all these policys

so frvwfr isn't gonna shit on me anymore if i use the "thunda sig" patient spirit pic? cool ty GoD

o frvwfr i'm not trying to get on ur bad side or anything...sry i wuz just confused

noone uses coward in there sig right?..none that i know of

CLICK ON HIS NAME ON UR TALK PAGE....IS IT REALLY THAT DIFFICULT...AND ITS NATA

Just click the User:Thunda/userboxes thing at the bottom..then its in there.

Tell that to your mom before she has another one like you tbh.

there was a kind of vote whipe at this build http://www.pvxwiki.com/w/index.php?title=Build:E/A_Fiery_Promise&action=rate because the build setup is changed a bit to make it lots more effective, maybe you could vote again (you need to delete your old vote for this :) ?robertjan 07:29, 30 July 2008 (EDT)

My name really has nothing to do with Thunda tbh, I really don't know how I got this name.

The Scrapbook Of Thunda (by jax)

A remarkable masterpiece, very well thought out collections of successes and phailures of Thunda.

A furious mouse scrolling, 120 bpm heart throbber. Shall go down in history as one of the great random pieces of crap made while the author was bored.

Well, I thought it was a nice try, but it lacks that certain.....entertaining tang that i expect so much from random pieces of crap made while the author was bored. I'm sorry, you're very talented but - *review cut short by a maniacal american idolist with a chainsaw.

Errr...ok so this is basically a scrapbook of your failures and successes created by me, because Im bored. And yes, I do have a strange memory that makes me forget all the important (and boring) stuff and remember random stuff like this.

"Jax: Wtf why are all of your characters female? perv."

Thunda, WHERE THE FCK ARE YOU"

Thunda, the dragon in ventrilo.

Thunda: Jax, I have 9 sets of elite armor on 9 characters, not to mention sets ive replaced

Jax: Too bad most of them make your characters look like eskimos on roids.

Examples: "NEGGERS go back in the jungle and stop stealing mah TVs"

Pretending to be black in our old guild JuNx, and having half the guild believing him.

You forgot about my appeal to my perma ban in rs (yeah ban now) where I said OMFG I CANT CLICK ON STUFF ON THIS ACCOUNT ANYMORE QQ /WRISTS OH WAIT I CAN JUST MAKE A NEW ACOUNT OR HELL, NOT PLAY RS CUZ IT SUCKS!

3 days for spamming "northkorea.com GET YOUR BOMBS TODAY" in all chat of kama d1. 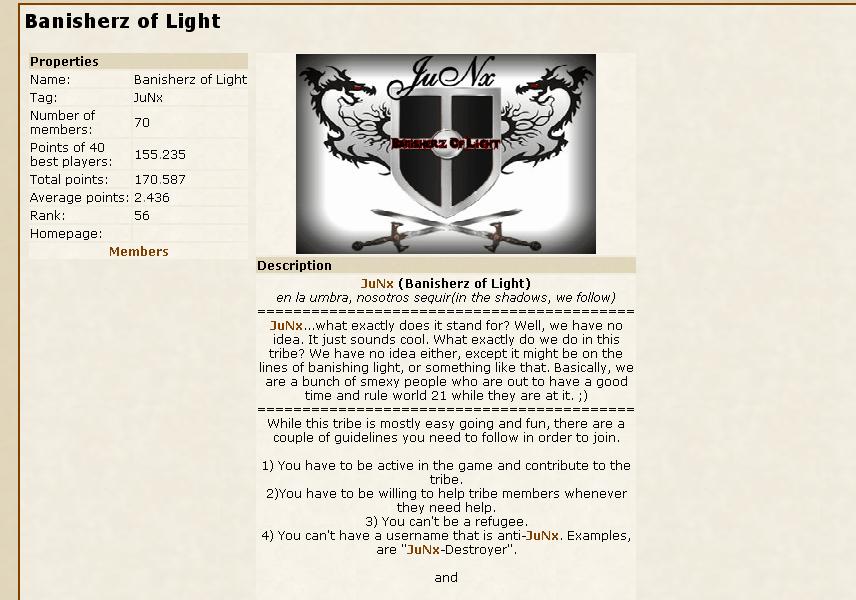 Sign your comments, and also: what's up with that? :o Godbox

JuNx was our old guild, and I guess Jax made it into some clan in his nerdgame, dunno though. 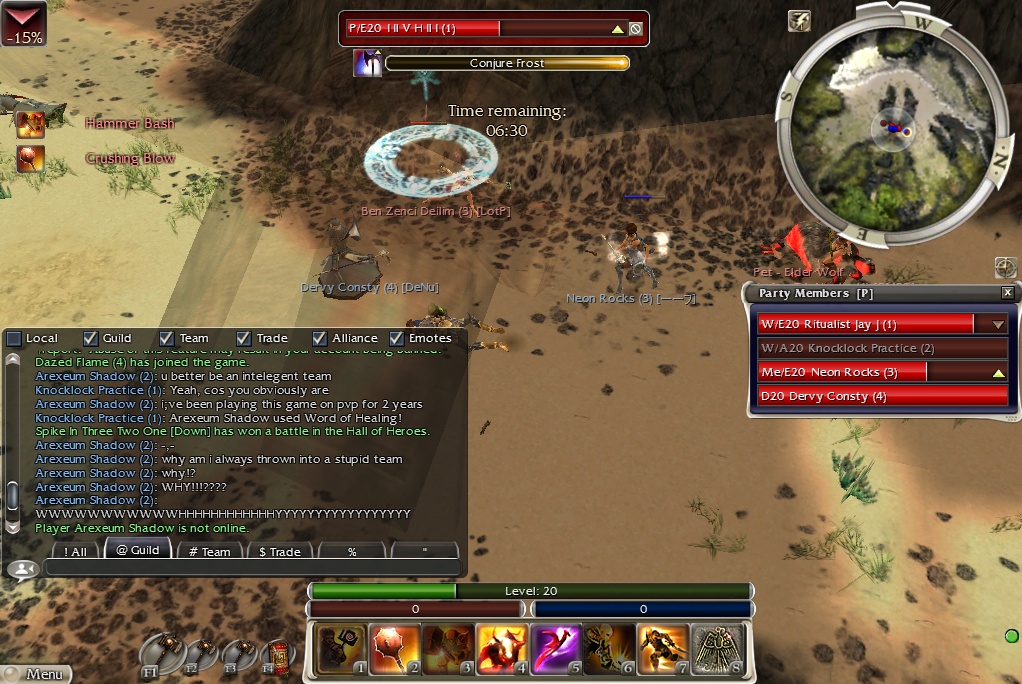 Which one of your nerdgames is this anyway?

Oh thats the game you tried to get me to play..

And it was so boring I couldn't get out of tutorial or w/e.

If you're a jax010 hater, you can find friends at: 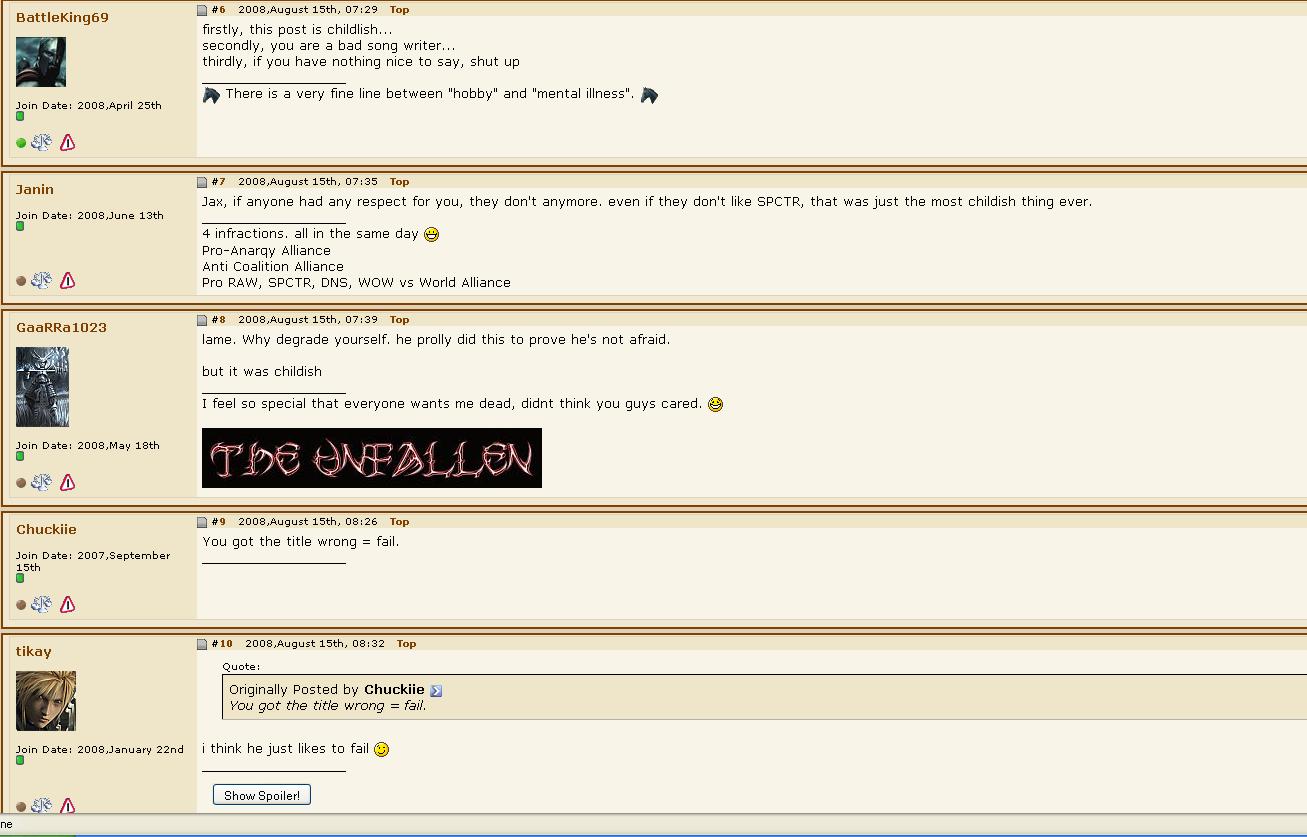 I won't even ask.

You know whats funny? The image of me ppl hatin on me is from when i put it on the world 9 main forums (where everyone in world 9 discusses politics n shit). This is the feedback i got when i showed the song to my own tribemates in our internal forums:

How many fame you got now?

i didnt get any retarded fame, cuz i had to go right after one match. Plus im going on vacation this weekend tomm morning to sunday night so ill prolly miss the whole double fame weekend. -Jax010//healingp=0 00:29, 23 August 2008 (EDT)

And this has what to do with racism? Godbox

Come back online I'll tell you how...

Don't infuse for them or you will be gone in the first day.

heres a message, you dont spam me enough. gg.

I only risk perma's for Effin.

I nominated you for User of the Week. Discuss.

Retrieved from "https://pvx.fandom.com/wiki/User_talk:Thunda/Archive_2?oldid=685061"
Community content is available under CC-BY-NC-SA 2.5 unless otherwise noted.