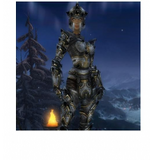 You can archive the page; however, you can't just delete everything (unless it's a violation of NPA). If you want to know how to archive, look over the policy. Karate

This is Chaos, I'm known as Dandy nowadays, though, but call me whatever you want.

See PvXwiki:Style and formatting for build article naming guidelines. Practically it's just gonna be something along the lines of "Build:Team - Vanderway" (you're not supposed to name builds after yourself, though, so something describing the team setup would instead be suggested). Enter the desired name in the search bar and hit "Go", or modify it into the URL-bar, it should be rather self-explanatory. After this, add {{Untested-Trial|HA|PvP team}} on top of the page. Just steal the code from a well-formatted article such as Build:Team - HA BBway is easiest.

Oh, and I wouldn't really suggest posting articles before the move to Curse is finished, because the Wikia side site is "chaotic", to put it nicely, and no change is expected any time soon on the PvX@Wikia part of PvX. --DANDY ^_^ -- 19:02, November 17, 2010 (UTC)

Retrieved from "https://pvx.fandom.com/wiki/User_talk:VanderBeltLegacy?oldid=1132960"
Community content is available under CC-BY-NC-SA 2.5 unless otherwise noted.