Only omelettes are strong enough, though, all of you weak people.

Omelettes are weak for dinner, maybe not for azn's, dey so smallll

Your stomaches are small, that's why you can't eat omelettes, now I get it.

I'm pretty sure you're trying to use a misleading racial stereotype to make an argument, Mr. Brandnew. Stereotypes are bad, just like Mexicans. ··· Danny Does Drugs 19:57, 16 June 2009 (UTC)

I'm pretty sure you were using a misleading racial stereotype in the comment just above mine! Brandnew 20:10, 16 June 2009 (UTC)

All Dans have large Peni!

The dutch are excluded from my research!

All of you are so terrible!

When you can go put your stuff in over the D/Mo that i put cause i deleted yours so just wanted to let you know that I did that so you could go back and fix it plz do it cause I really messed up. I am new to this and still don't understand everything about the site so thanks.

It's no problem, I fixed it, please remember to sign your comments with ~~~~.

While im not overly fussed, im sure you have to put a deletion tag on things for a few weeks before just deleting stuff-? And yeh it is faster to do a CoF ru, get 15k then spend it on sweets, but your assuming everyone has, EoTN, Factions, and a 600 that has got as far as Doomlore.--Obsidianflame 08:57, 17 June 2009 (UTC)

Thing is that PvX is actually quite Elitist. We try to store the best-of-the-best builds (which we don't succeed in btw.) Not builds that everyone can use. As for the deletion tag. You only get a 2 weeks grace period if said build was trashed, and didn't have a WELL or Delete tag. If said build does have a WELL or Delete tag, it may be deleted at any time of any day. Brandnew 09:06, 17 June 2009 (UTC)
I can restore it to your userspace if you would like, but the build met the requirements for WELL.

Yes, but VoR -somewhat- works outside of hexways as well. WK Sword doesn't. It's just like why we never had an Anthem of Fury paragon vetted. Because they only work in melee heavy teams and are terrible outside of it. Brandnew 09:57, 17 June 2009 (UTC)

Actually people are running this in HA too, like not in hexway (well with one LC buts thats hardly hexway). And you could easily argue it somewhat works outside of hexway too (WK is srsly a powerful hex).

Me and crow are in relations, therefore crow agrees with me.

Crow
Ownz in hexway and allows you to drop the WK necro for another war for bigger damage. Pointless elsewhere.
Pointless almost equals terrible, therefor i am right. Brandnew 10:08, 17 June 2009 (UTC)

Crow only says what is true at the time of speech.

Cry of Frustration on Paragons in HA

what's the deal? Possibly I am just being bad, but I don't see the synergy.--|

Needs a hard rupt, why not?

Not your build in particular, just paras in general. Why is it run so commonly on paras? is it because they can afford it with leadership?--|

A paragon is just a massive utility slot. If you have a paragon on your team you can pretty much put anything on it that you don't have room for in the rest of your group. If that's a hard rupt, then you almost always have room/energy for it on the paragon. Drahgal Meir 17:20, 17 June 2009 (UTC)

This is reason number 3 why Paraspike is fucking ridiculous - walking tool boxes. (Reason 1 is 6 AL 96s hitting you in the face. Reason 2 is retarded number of support skills in addition to huge ranged damage.) ··· Danny Does Drugs 17:23, 17 June 2009 (UTC)

I want a new sig

Someone make a brave one.

If you don't mind an image sig, I'll make you one tomorrow :D

Frosty smash is great....can you have it in red instead of black?

Smash is sensual, the font is a little, hard to read though.

hey, there's one thing I don't get....what's with the PvE spirits buff? wtf is reducing the cast time supposed to do if the good spirits all die in 8 seconds anyway (and have 60 second recharges)?

Rit lord makes a comeback! And they probably won't be buffed to that extent. Life

But I still don't get what they're thinking. Really...even if they did buff their cast time to 3/4s, the good spirits would still die too fast for them to be useful and take forever to recharge. The only way anyone could actually use them would be with AP.

I'm not saying it's difficult...what I'm saying is that typically Anet seems to want there to be more than one way to do something. If this update is true, then there will be only 1 elite anyone will run as a spirit spammer....so again....I don't understand what they're thinking.

That's true...and I was wrong...people will run Ritual Lord too.

I actually think it's time fora new sig for me too. Someone get on it. --

I WOULD NEVER SHAVE MY BEARD! 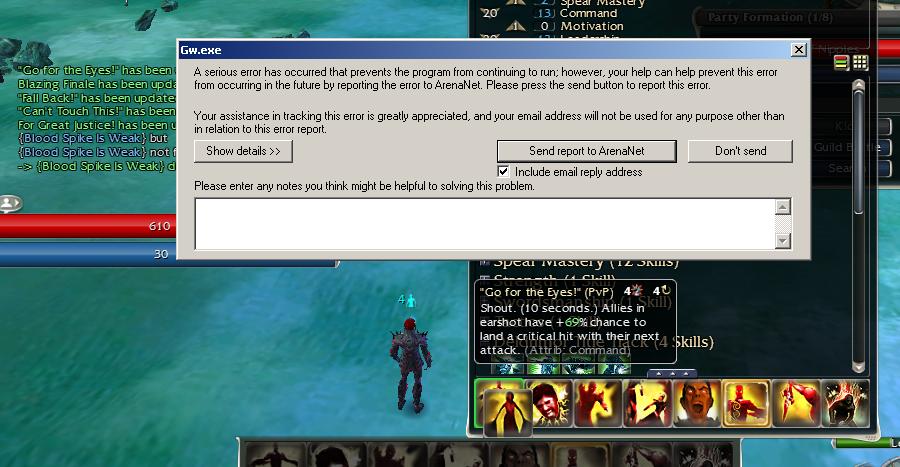 you mean the ones I put there?--Ikimono"a rabid grizzly bear" 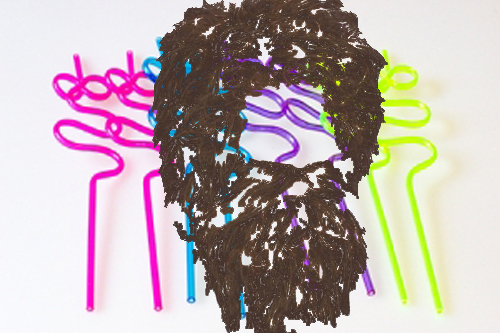 Why are you deleting so many Necromancer builds that could be used? I highly doubt you know what the f*** you're doing.

whoru? --Frosty Mc Admin 19:12, 21 June 2009 (UTC)
And also i wasn't "deleting" any builds I was flagging them for POSSIBLE archival, LC, WK and many hexways have seen a real drop in usage since the nerf (especially in gvg), but I was just putting them for possible archival so I can come back at a later date when the meta is a lot clearer. --Frosty Mc Admin 19:14, 21 June 2009 (UTC)

Quote * Heroes are more likely to scatter appropriately when affected by Ray of Judgment. I have noticed the monsters don't scatter but in HM they do. So really Ray still isn't that bad. Granted going into HM you have to take grasping earth or some sort of snare. Did you find this as well?

Why are you asking someone who pve's about once everytime the labour party makes a good political decision? --Frosty Mc Admin 11:15, 22 June 2009 (UTC)

Why wouldn't I ask somone who is very informed in the game....and politics? If you don't care no problem I will find my answer else where

An urgent matter has recently come to my attention. You see, the best build in existance does not have a 5-5-100% rating. As of right now, this page only has a 5-5-98% rating. It is deeply disturbing. In addition, it would appear that said build had it's ratings locked. Finally, how the hell do you vote multiple times? Life

Dear Mr. Frostels,
. . I'd link to inform you that your position as admin on this spectacular wiki has come into a conflict of interests between yourself and the rest of the community. As such, we ask, as a community (aka Auron & Co.) that you resign, effective immediately. I haven't slept in two days and I think your resignation would make me feel better about how shitty my miserable life is. Save me from eternal misery. Have a nice day #___^

It is the build ratings page for builds thy don't exist :3 Life

I just finished and deployed the updates skills DB. You should be able to see the changes on the site now.

I've only did a few random tests, and it looks like the new skills are showing up correctly. The only thing missing is images, which I'm correcting now.

Please let me know if you spot any other issues.

Aha, nice to see the skill split in there, that will make things much better. There are still a number of issues but at the moment I am a little busy. Later on tonight or tomorrow morning I can go through all the skills pretty much and tell you what each skill needs done, all the skills descriptions and main attributes are over on Guild Wars Wiki. Thanks again for the changes, I will get back to you with the skills which aren't correct when possible. For now check out User:Frosty/Skills, thats where I am keeping a record of this kind of thing.

Wow! Thanks for that. I'll try to implement the changes around Monday or Tuesday. I might have some additional questions -- will drop you a line either way. --TOR 00:42, 28 June 2009 (UTC)

Joined us on the field of battle, Crowels was there and fishy moo too, and Mattie was there for a bit of it. After we banned our flagger from the guild for being a dick it was truly a sensual experience. He had the audacity to call crow bad :O----ﮎHædõ๘یíɳ

Can you check out the tag on this build: http://pvx.wikia.com/wiki/Build:A/Me_Stygian_Brute_Farmer. Thanks jboy157

i can explain that one. Basicaly we created a page here which shows pages in untested and when they were put in untested (in order), so basically unvetted pages. Upon it's creation I said anything put into testing before ~16th may could be trashed, because chances were it will have been effected by some update or something (or it was incredibly out of date (one build was around 2 years old)), by all means if you can find another 2 votes feel free to put it into the relevant category. ~ PheNaxKian Sysop 16:38, 27 June 2009 (UTC)

Put the penil areas that were on my talk page back.

Not really an image problem but the mini skill bar icon, and the regular icon for faintheartedness are different.

Hmmm that is odd, I don't really think it is worth looking into (since the big image is very similiar). Looking in the old image version of the skill I can see that it was the old skill image, but it looks almost the same so I am not really bothered about it. --Frosty Mc Admin 16:44, 29 June 2009 (UTC)

The image will have been changed when factions was released (or any time really, but a Game release seems likely). The PvXbig icon will hvae been uploaded before this change, and the icon will have been updated when the game updated, that's all. There are a few other skills that are like that iirc. ~ PheNaxKian Sysop 16:48, 29 June 2009 (UTC)

Retrieved from "https://pvx.fandom.com/wiki/User_talk:W-Frosty/Archive_12?oldid=922322"
Community content is available under CC-BY-NC-SA 2.5 unless otherwise noted.