Homesexual? That's a new one on me. Do you prefer terrace flats or semi-detached? -

I'm really drunk every night. You wanna fight about it? I don't need you, anyway! Aarrugh... thish ish a messh... -

I also have an awesome pic I think you'll appreciate. I'll link it in a few hours. -

this doesnt even deserve a spot on grinsh's epic page

already have, gonna keep doin it for about 12 minutes and 34 seconds.

for some reason i pronounce your name "fiffwivver".

"GvG without skakid, is actually impossible, noted and recorded."

Did GoDway teach you nothing? How about "GvG without Frosty is actually impossible", seems as we always play with you. --

Did Misery report you for sexually harassing him? -

Which one? Black Mesmer? -

Lol. Hope not. If so, send them a complaint and say your name is "Niga Benjerobi". -

THEY'RE BEING RACIST AGAINST MIDDLE EASTERN PEOPLE. Now lose the British accent and pick up a Middle-eastern one. --

Or Niga Mohammad. Thats about as middle-eastern as it gets. Or Niga Bin-Laden.--

No one expects the Nigian Inquisition! --›

my sig? Imight be *Jebus*

Extra damage, Bleeding + Apply Poison is awesome condi pressure, then add cripple wtf? THEN make it quick activation. It's just loads of awesome all balled up. Frosty No U! 02:35, 8 August 2008 (EDT)

The damage is unconditional, why do rangers run sloth hunters? recharge is not great but it's 3 conditions with ONE SKILL (with apply), that screams condipressure. Frosty No U! 02:42, 8 August 2008 (EDT)

How many builds have you submitted since the update already? You kinda already took my WotA idea but put it onto paper faster then i could. --

Haha i guess. That update was massive. Its not even funny how many ideas I have to put down. Just dont know if i have the brainpower to do so at 2 in the morning. --

It's 8 in the morning here and I haven't slept. And what they did to GvG was horrible though, thb the skill update has made physichal raw damage even better. Frosty No U! 03:08, 8 August 2008 (EDT)

True true. Its opened up so many options. And I actually like the GvG change. Time for something new anyway. IMO this is the best update to GW ever. --

Can you submit this build for me please?

Okai i think that of 5/10 new builds whit the new elites its Frosty which have added:P I suppose Frosty want alot of hes builds to be in the Great Section but this is going to much.. I dont reach to submit anyone!! Im at work and doesnt have GW here , so stop plz kthxbai! Massive

No. We lost when we'd out DP'd them. And we should run this Godbox

Here is the TB channel and pass: You are dumb - Misery Is Grumpy

Yeah, see I did know because I didn't run it yesterday either. - Misery Is Grumpy

(Im using Indent wtf oO) Btw you guys like a guild or wtf oO and whats ur rank etc :) Massive

Oh what rank? Cant see y in the in ladder and also who is the members? Btw stupid question but how do you know how many indents u neeed? Massive

So you guys doesnt take the + sign beside the edit or just scroll down to the theme then edit ? Massive

I thought reading comprehension was part of an IQ test. Dunno, never taken one. - Misery Is Grumpy

Ok, then permit me to follow the crowd, lolMENSA. - Misery Is Grumpy

Frosty: if we play that you're the fucking ranger, no matter what you say. Godbox

We got Frv, Panic, Frosty, and I as officers, Godbox, Thunda, Der Pwnzer, Crossfire, Dutchess, Ojamo, Brenden, and Gates as the active members. --

Who can i play in the gvg build? and come on my talk page and tell me what you think of my TA balancedDutchess of Roseakalukejohnson - talk 08:12, 10 August 2008 (EDT)

So like 1/2 of all the active ppl in PvX is in XoO btw didnt find you in the guild list, whats your Name and rank :) Massive

I used to guest for them when they were terribad, but now they are too srs bsns to guest me. - Misery Is Grumpy

It's two rangers: Frv and Frosty; I take necro because that's the only thing I can play in that build; ojamo is one of the frontliner; the rest I don't know. Godbox

Thou if Frosty is a good Pblocker he should be crippshot since IA is moar spam spam :P Massive

Depends who's on but probably. Godbox

Nice build ya made there :P Massive 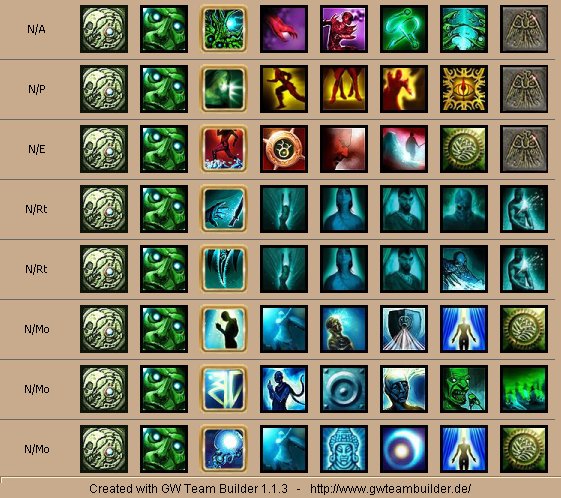 and why the fuck do you have 3 copies of Signet of Lost Souls in a spike build... - Misery Is Grumpy

Do people really have to keep being told its an inside joke? Dutchess of Roseakalukejohnson - talk 15:35, 11 August 2008 (EDT)

what do you think

Its too long. It also disrupts line spacing. ---

No, I meant the actual text. It makes the line under it slightly lower then it should be because of the <sub> tag. It may be bcuz Im using IE, but otherwise it should be changed. ---

I'm on Firefox and I'm getting the same.

It might violate SIGN, though. It's got some pretty massive code. Although, it's still only have the size of my Christmas sig.. haha.

i kinda assumed that the suggested limit referred to display characters rather than everything including formatting ...--reason.decrystallized In real life, pokemons would be used as sex toys. 23:42, 11 August 2008 (EDT)

Nope. It includes formatting. Or.. maybe not. Talk to Armond. He might've just gotten on my case because my sig took up 5 full lines of code.

Retrieved from "https://pvx.fandom.com/wiki/User_talk:W-Frosty/Archive_3?oldid=1141054"
Community content is available under CC-BY-NC-SA 2.5 unless otherwise noted.