second! the regenerator will save us!--reason.decrystallized In real life, pokemons would be used as sex toys. 22:17, 12 August 2008 (EDT) 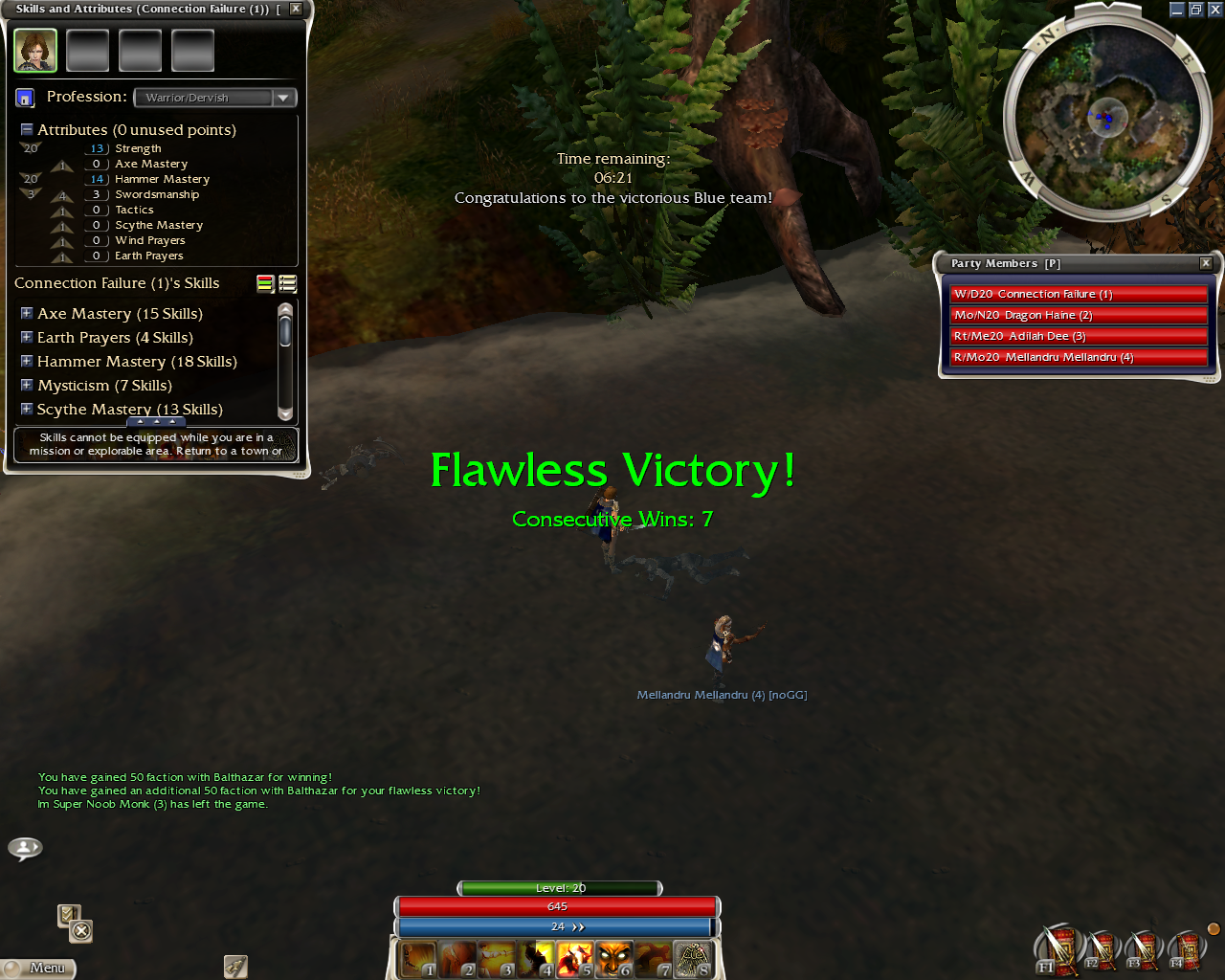 Lol, fail. Thtas like this one time I switched from critspear to critscythe (during WoTA awesomeness) and I still had a spear/shield set and no scythe set >_< But at least you could use your attack skills. ---

That arouses me. It also reminds me of GvGing on a WoH bar with RC attribs <3 --Tab Moo

In the guild, whenever we refer to someone being a bad Monk or forgetting to spec into attributes, we call it a Jax. --

^ tbh I want such a sexy page xD may be going back to my 3 miles of Companion Cubes, it was hawt. Godbox

I should make you a Snorlax page. /wave --Tab Moo

Pachirisu, I choose you! Do your happy dance in anticipation of your blood letting! Yay! -

Pachirisu page would be hawt. You need an emu one more though. --Tab Moo

Made just for you.

Very nice job, but that still looks like a turd coming out of a paper bag, imo. ---

You beat Goon Squad. They are rating 800. —SkaKid

We have beat more then them --Frosty

They beat us with one of our wars DC'd and our heal monk lagged out. They think that makes them good. They also had 2 bad wars, a WS derv, an RaO axe, and 4 fucking smiters. We rolled them twice before both disconnects. This paragraph is poorly formed and has too much punctuation. I'm too tired and pissed off to do it right.

There's no such thing, as too much punctuation. However: Some thing, that is very similar to, or a perfect example of too little punctuation, is bad. A lot of punctuation can still be understood, but when you get sentences that contain >30 words, it's very hard to understand a thing of it. And sometimes I find sentences of over 60 words, not counting words in parentheses >.<" --›

^ I came back when I was needed. --Frosty

I was afraid, i was petrified

Thinking I could never live without you by my side

But i spent so many nights

Thinking how you did me wrong

And i grew strong

And i learned how to carry on

And now you're back

I should have changed my stupid lock

I should have made you leave your key

It took all the strength I had not to fall apart

Kept trying hard to mend the pieces of my broken heart

And I spent oh so many nights

Just feeling sorry for myself

I used to cry

Now I hold my head up high

And you see me

And just expect me to be free

Now I'm saving all my loving for someone who's loving me

your userpage to help me with collapsible skill bars (wow i fail) but yeah it looks sexy. thx. I is *Jebus*

It was tab that made it. --Frosty

wow. and looking at that pitcure assures me the build still sucks. Apart from that suicide bomber, your team members are balanced. and that beats RA teams Dutchess of Roseakalukejohnson - talk 06:55, 22 August 2008 (EDT)

You have some kinda of thumper and an assassin with a monk, you coul run echo mending on that team and do as good. --Frosty

I've beaten a decent synch in RA with a SStone Ele, MB Ranger (he was rather leet), Monk and a Caster-hate Mesmer. Balanced pwnz RA. --›

They're my personal favourite. --Frosty

dugtrio ftw fools. I is *Jebus*

yeah, kinda sux. does anyone know anything about anyone who might have possibly comitted such a haneous crime???--Froggerton 20:26, 11 September 2008 (EDT)

Does it bother anyone that the attack was made on September 11th? I is *Jebus*

The attack was made on September the 10th... --Frosty

When you'd least expect it tbh. -

There's no active idiots in the guild. I would be if there was some but it seems like they're all trying to become successful in the worst fucking place ever - irl. Godbox

I'm successful everywhere, but that's because I carry pictures of Ricky and Rawr around with me.

You're just not brave enough. Lrn2Bravery.

Ownz RA, 83 AL, stop living in denial, your almost as bad as the people who say Warr spear chuckers are bad. --Frosty

could you not have just seen SS and said that?Dutchess of Roseakalukejohnson - talk 06:39, 13 September 2008 (EDT)

I probably could have. yes. but man; spear of lightning+disrupting throw or harriers toss spikes were aaasum. Brandnew. 06:41, 13 September 2008 (EDT)

tbh, i'd stick with disrupting throw instead of harrier's. and ofc it was going to be a strong spike... theorycrafticing is good (Y) Dutchess of Roseakalukejohnson - talk 06:42, 13 September 2008 (EDT) 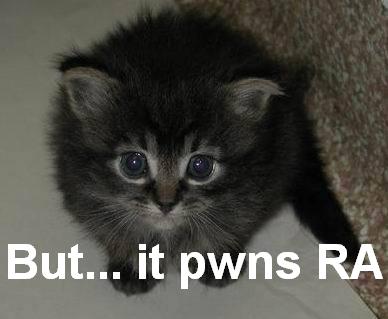 There "It ownz RA it's a Heal Party Warrior" and then there is actually a build that functions well in RA, there's a difference. --Frosty

Well I tested it and found I was only able to use Pious every 15 seconds or so, I could barely use Eremite's at all... --Frosty

it really isn't hard to play. You shouldn't have terrible energy problems, it's just a little tight. And you should usualy be using a zealous scythe Dutchess of Roseakalukejohnson - talk 14:45, 13 September 2008 (EDT)

I used Zealous and Sundering (Zealous while attacking) and found no time to use Eremite's, I still think if you spec into wind and take lyssa's assault it would work much more efficiently. --Frosty

now... moving onto my other build. the soldier's turret. look at it and vote/discuss Dutchess of Roseakalukejohnson - talk 15:13, 13 September 2008 (EDT)

Can you re-examine it please. The build is very good for ABing with that elite, I dont think your rate of 1,1,0 is justified. If you judged the build for its RA tag, well it is possible it sucks in RA, I have never tested it in RA. Im not the one who made the build by the way so Im not sure if RA is meant for that build. Well anyway maybe you should remove the RA Tag if you think for sure it sucks in RA, but it does great in AB as an assist Rit. Heal + damage. Xinrae's weapon also act as a protection: damage is limited to 5% of target ally's max Health . Thanks.--BlackBox (talk) 06:11, 14 September 2008 (EDT)

It's either a worth being on the wiki, or it is not, that isn't --Frosty

Actually, you can't argue with Frosty because of Affirmative Action legislation. He's half asian, half black, and therefore is more important than you.

And that, bitch --Frosty

Now you win. - Misery Is Friendly

oyeh. Poke your nose onto GW tonight and remind me to make you an england hottie for your page. It probably won't be as awesome as Karate Jesus, but meh. -

Retrieved from "https://pvx.fandom.com/wiki/User_talk:W-Frosty/Archive_4?oldid=1141056"
Community content is available under CC-BY-NC-SA 2.5 unless otherwise noted.